News Ticker
I believe the 2-0 victory over Chelski was fully deserved and I don’t believe we were given enough credit for our level of performance. Even before Mikel was sent off for a rash challenge on Evra, we dominated proceedings. Rooney went so close early on to scoring a quite remarkable goal, only to be denied by the brilliance of Cech. When did Chelski threaten? Down the left a couple of times with Malouda and Cole, but that was due to the fact that Ronaldo doesn’t really defend and it resulted in a cross to no-body. I don’t think you could actually say Chelski had a clear cut chance, with Shevchenko coming the closest by blazing it over the bar.
The Mikel sending off was harsh, I agree with Fergie on that one. But surely Chelsea can’t argue that fact as Joe Cole stayed on for what can only be described as an ankle breaking challenge on Ronaldo. It was horrendous. Cole was also at the center of the first penalty claim in the first half – which was a penalty that wasn’t given. Cole clearly caught Evra before getting anywhere near the ball.
Michael Carrick and Wayne Rooney where outstanding throughout the game. Carrick’s range of passing was sublime along with the work rate and determination of Rooney. I have no doubt that the score would remain the same had Mikel stayed on the pitch. Our season has finally started and we can only go on to play even better football and get greater results. 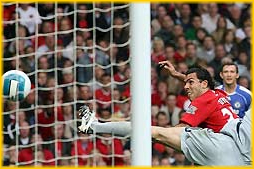