It’s new season time! After almost three months of time off, it is time for competitive matches to start. Manchester United kick off their season in Skopje in UEFA Super Cup match against winners of the Champions League, Real Madrid.

After a turbulent season of not-so-glowing Premier League performances and three cup victories – in Europa League, League Cup and Community Shield – Jose Mourinho and his side are ready to once again start the season with a trophy. Yet this time, the opponent is somewhat tougher.

Real Madrid last season did something they seldom do. They have won the league and Champions League double, intriguingly a feat they don’t repeat as often, having in mind they became European champions for the 12th time. Also, they won the Champions League for the second time in a row, something no one did since AC Milan in 1990.

Real Madrid have named a 24-man squad for the match. It includes all the best players from last season. Cristiano Ronaldo is in contention to play against his old club, Gareth Bale is Real Madrid player and should stay one after the transfer window closes and impeccable midfield trio of Luka Modric, Toni Kross and Casemiro is ready to continue where they left off in a 4-1 beating of Juventus.

Also, Zinedine Zidane has made a habit of using younger, homegrown talent in his team and there are plenty of youngsters in this squad of his. Dani Ceballos arrived this summer from Real Betis after a great summer for Spain’s U-21 team while Marcos Llorente came back from loan at Alaves. Isco and Marco Asensio are also present, after a great last term, while Alvaro Morata left the club in order to get more playing time.

Real Madrid are expected to play in a mixture of 4-3-3/4-3-1-2 formation, the same way they played in the finish of last season. If Bale starts, it will be a 4-3-3, while Isco’s presence in starting XI could shift him inwards and push Ronaldo up top in striking partnership with Karim Benzema.

The match will be played in Skopje, FYR Macedonia, at the Phillip II Arena. It was constructed in 1947, but was renovated and reopened in 2011. It is a 33.460 all-seater. Its usual tenants are FK Vardar and FK Rabotnicki, but both teams recently played at other stadia, in order to keep the pitch in perfect state.

It is the first match of the season against a very strong opposition, so Mourinho is expected to play in his usual 4-2-3-1 formation. His recent use of 3-5-2 should remain ‘up his sleeve’ for a while. Real Madrid are a powerful team and capable of punishing every little mistake, so Mourinho should choose a more familiar tactics.

Both teams defend very well without the ball and Madrid have surprised many in recent 18 months with their ability to insist on opponents having the ball, using the spaces left behind in swift counter-attacks. Manchester United are in for a tough match, trying to win their first UEFA Super Cup since 1991. 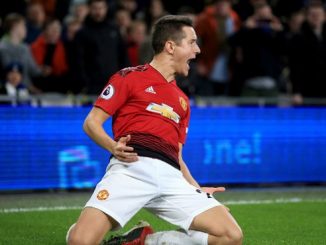