Ruud van Nistelrooy’s record was official broken by Jamie Vardy, as Manchester United drew 1-1 with Leicester City at the King Power stadium. The Dutchman, who was the last player to score a winning goal at Leicester back in 2003, tweeted his respect of the record being broke as both clubs failed to find the winner, which would have sent either club to the top of the table ahead of Manchester City.

Vardy had scored the opener on 24 minutes, following a beautifully crafted left footed pass ball from Christian Fuchs. The home side counter attacked brilliantly from a United corner before Vardy smashed home his eleventh in a row – a unbelievable story for a player who was playing non-league football five years ago. United hit back just before half time with a header from Bastian Schweinsteiger. The German smashed home from a superb corner from Daley Blind, whilst outmuscling Shinji Okazaki in the process.

The tie took a familiar pattern, with Manchester United dominating possession without ever really threatening Kasper Schmeichel in the Leicester City goal. The home side were setup to counter United, and Louis van Gaal looked to nullify the any through balls from the full backs into the channels, by deploying Wayne Rooney and Anthony Martial wide when not in possession – for Juan Mata to press the centre halves. When United in fact won the ball and started a counter, both Rooney and Martial were too far apart to capitalise.

Rooney was taken off due to a injury (according to the manager), to be replaced by Memphis Depay. But the United captain looks a shadow of his former self in all honesty. The result was fair as both sides continue their title challenge into the Christmas period.

No knee-jerk reactions. No hasty decision. Wayne Rooney has looked a shadow of his former self for some time and it would be in the captain’s best interest, along with United’s, if he was to spend some time on the sidelines. He has looked a figure on the periphery this season, with limited shots on goal, poor link up play, a first touch that has totally deserted the once-coveted number ten.

In the 12 games that Rooney has played in, he has notched up two goals and contributed zero assists. When looking at the elite of European football, Cristiano Ronaldo has nine goals and two assists (in thirteen games), whilst Lionel Messi – who has played a paltry eight games – has notched up four goals and two assists. Coming back down to earth, Neymar has a ridiculous 14 goals in 12 games with five assists, while Thomas Muller – who was a United target in the summer – has notched up 13 goals in 14 games and has contributed two assists. When comparing Rooney’s goals and assist with other top talent from around Europe – it is quite clear how below par he has been this season.

The story is the same when assessing the situation closer to home. The injury prone Sergio Aguero has seven goals and one assist, whilst new signing Kevin De Bruyne has already hit four. Looking at the rest of the top four, Jamie Vardy leads the way with fourteen goals whilst Riyad Mahrez has his an impressive seven. Lastly, looking at Arsenal – Olivier Giroud has seven goals, Alexis Sánchez six and although Mesut Özil has scored the same as Rooney, he has contributed eleven assist to the club. The list could go on. Wayne Rooney and Manchester United are not delivering from an attacking perspective.

Wayne was a little bit injured, you saw him limping. I also wanted to change a striker because they were not running in behind.”– Louis van Gaal on taking off Rooney

Yes, Louis van Gaal is a pragmatic figure. Against Leicester, his deployment of Rooney and Martial to operate wider than they would do naturally to nullify any counter attacks seriously prohibits both players from their natural game. The sacrificing of a talent to assist the greater good. Many Reds will disagree with that slow, laboured approach can be considered the greater good – but Rooney has sacrificed his natural game in the past to allow Cristiano Ronaldo to operate through the middle, and played a lot better than the first four months of this season would tell you.

So, just why does Rooney look a fading figure? One suggestion is that, despite his obvious drop in form, he doesn’t have enough pace around him to influence play and to put players in behind defences. The diagrams below highlight his influence in two very different games – against Leicester this weekend and a top of the table clash against Chelsea in 2011 when he was allowed to play in his preferred role. 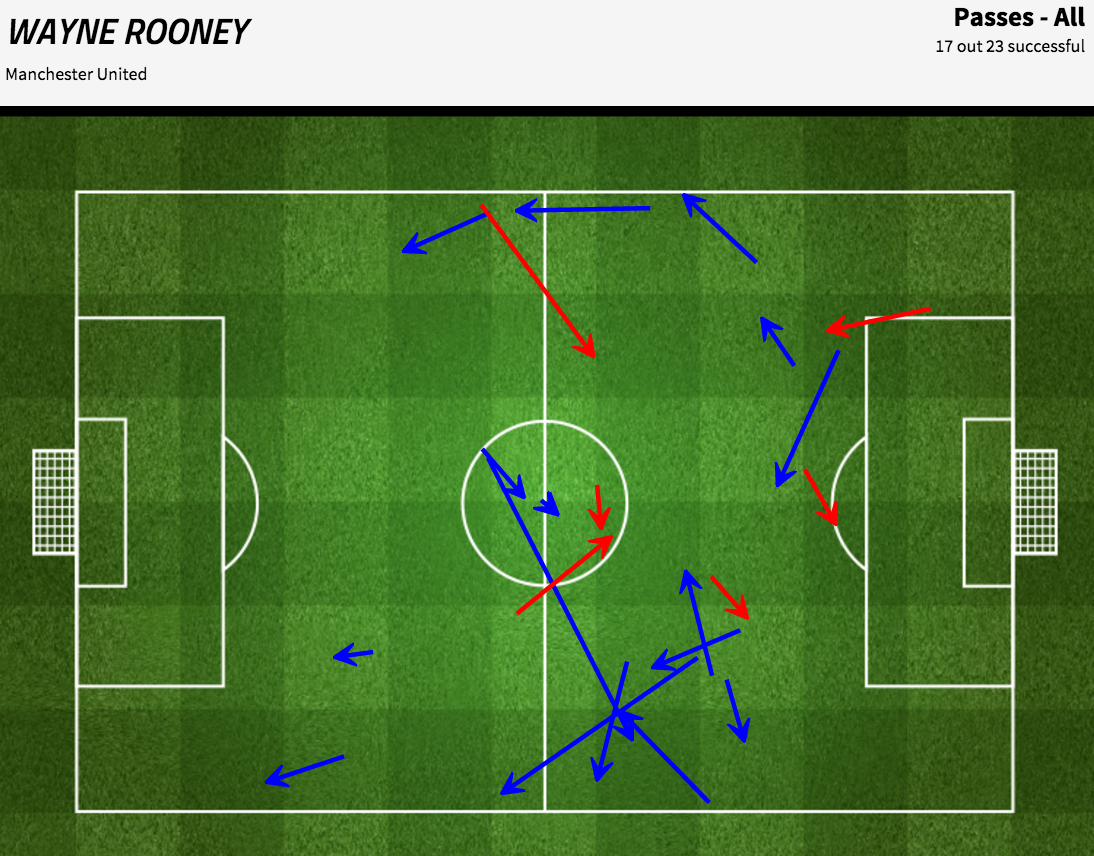 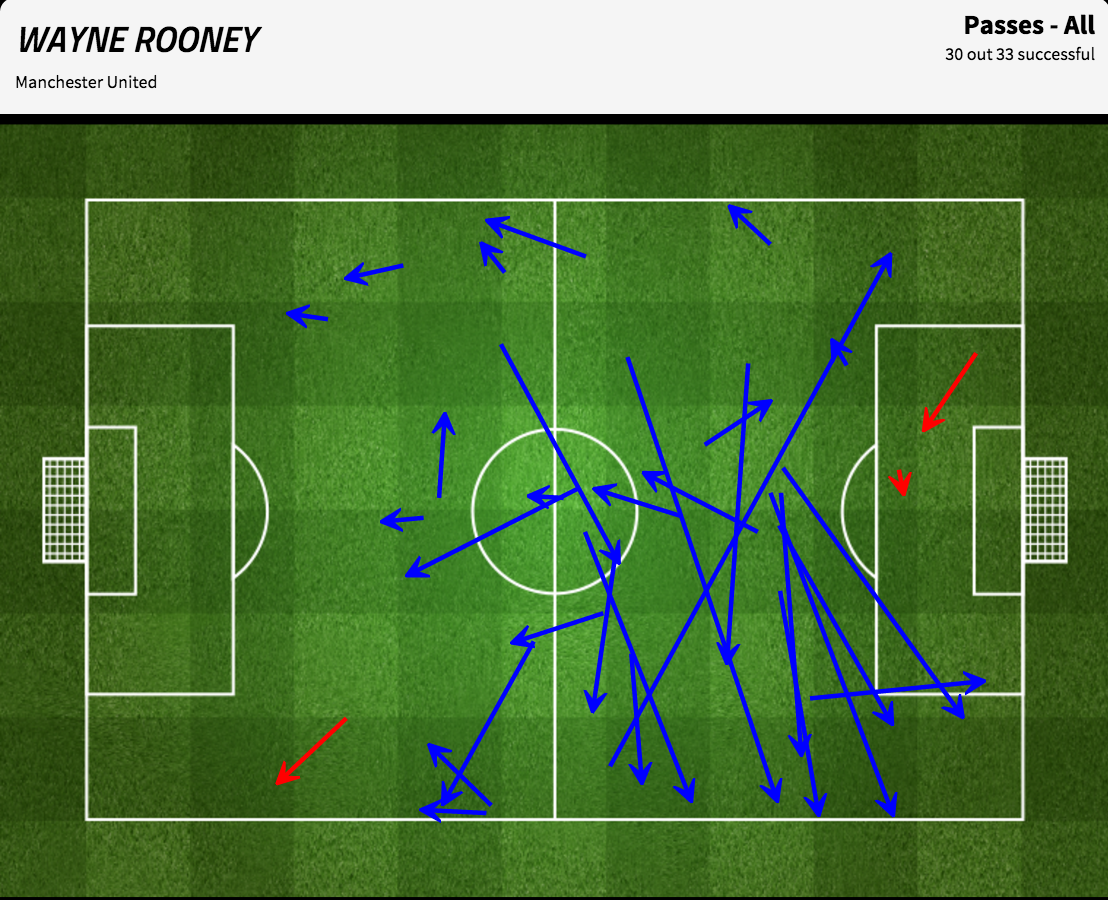 It has been a slow decline for Wayne Rooney since the departure of Sir Alex Ferguson. For all of the clashes, the disagreements – perhaps Rooney may now realise that he has kindred spirit in the former manager and that a hard critical stance was perhaps the best motivation Rooney once needed to ensure he was on top of his game. Rooney’s introduction to the Old Trafford faithful all those years ago against Fenerbahce was like a fairytale. Out of action following his heroics at Euro 2004, to score a hattrick in that manner was simply out of this world. The world knew of this talent – but now, he was doing it at club level at the highest stage.

234 goals later, Rooney has a chance to break a Manchester United record that has stood since the 1972/73 season when Sir Bobby Charlton scored his final goal for the club. He has already surpassed the 49 goals Charlton scored for England, but in a season that a couple of years ago looked as if both records would be broken in a blaze of glory, simply have been replaced by a potentially limp end with the finish line a hazy distance on the horizon – a soft penalty, if you will. His talent deserves more than what is on display at the moment.

But do you remember the goals? The Newcastle volley, the chip against Portsmouth, the volley against Middlesbrough. These were moment early in his Manchester United career where anything seemed possible. There was no fear. When the ball dropped to Rooney you felt something was going to happen. An inverted pass, a spin or a powerful shot. There was a time when he’d be on the edge of the area and you’d fancy his chance to chip the keeper – regardless of how tall the opponent was.

That transfer request changed it all. There were moments that followed that were of pure magic – most famously, that goal against Manchester City in February 2011, but it was never the same care-free Rooney, who was on par with any young talent around the world – in terms of impact. Ronaldo would go on to surpass him in terms of importance to the team, but once the Portuguese forward had departed in 2009 – it was Rooney who had once against stepped up to the plate to be the number one figure at United. A brilliant 2009/10 season for Rooney, saw United pipped on the final day of the season to the title by Chelsea and losing out in a very narrow defeat to a van Gaal led Bayern Munich. Rooney’s injury in the first leg spelt the end of the forward’s campaign, both with United and England in the infamous 2010 World Cup finals.

So what to do. Is he done and dusted? Not quite. Francesco Totti once hit 32 goals in 50 games for Roma following a below par season, whilst Teddy Sheringham had an unbelievable revival in the 2000/01 season, having played second fiddle to Andy Cole and Dwight Yorke for the previous two – very successful – campaigns. Form can dip, but Rooney hasn’t looked that player that once excited for some time. There were glimpses at the start of the 2013/14 season, which again – reiterates the point of the United captain working better with a point to prove.

For now, Rooney needs a break and be taken out of the firing line. United are at home to West Ham, who have picked up a number of scalps on the road this season, next Saturday – and this would be great opportunity to “rest” Wayne Rooney ahead of the Champions League tie to Wolfsburg – where United really have to attack. This could be the perfect response for a player who one really does not feel has finished with United, just yet. Louis van Gaal’s tactics speak volumes from a defensive viewpoint. United are not conceding goals, but not scoring many either. Rooney is capable of changing a game in an instant and United will need that natural ability to shine through in the Volkswagen Arena.

Is Wayne Rooney being impacted by the style of play or are his powers beginning to fade? 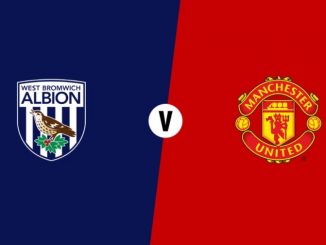 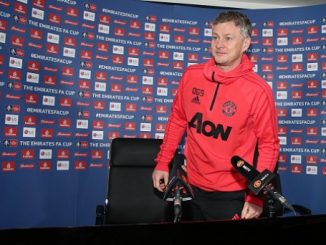