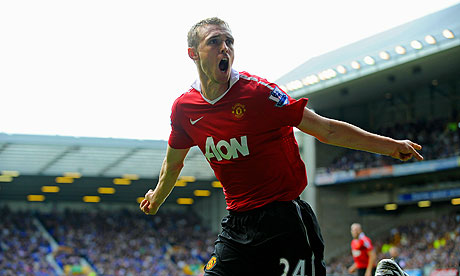 Over the years United and Liverpool can boast about some of the most iconic midfielders this country is lucky enough to have ever seen. From Robson to Keane for United and Souness to Gerrard for Liverpool, there have been some epic clashes in the centre of the park. The match at Anfield will mark the 183rd time the two sides have met but United haven’t picked up a victory (at Anfield) since the 1-0 win in the December of 2007 (scored by Carlos Tevez of all people). In the time since that victory United have lost 2-1 in 08/09, 2-0 in 09/10 and 3-1 last season. Last season, United looked extremely pedestrian in the middle of the midfield, with Scholes and Carrick – this time around, I expect Ferguson to look for energy and drive in Fletcher and Anderson.

In 2007, Anderson and Hargreaves were the midfield duo in a 1-0 victory. Benitez would always line up his sides in a 4-2-3-1 formation, which of course means that United midfield duo would be outnumbered against the defensive clog that is Javier Mascherano, the industrious Gerrard and the guile and craft of Yossi Benayoun. Having said that, United had Carlos Tevez, Wayne Rooney and Cristiano Ronaldo in the lineup – with Tevez and Rooney often dropping deep to vacate space for Cristiano Ronaldo to run into. If my memory serves me correctly, Ronaldo had a poor match and was eventually moved up top after United sustained heavy Liverpool pressure towards the end of the match and tried to counter attack. Below you can see how Tevez and Rooney worked back to put in tackles deeper when United weren’t in possession of the football, which no doubt helped to bulk up the midfield presence: 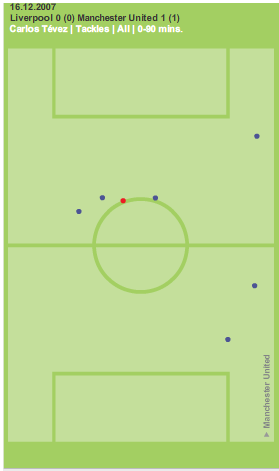 Carlos Tevez Tackles versus Liverpool in 2007 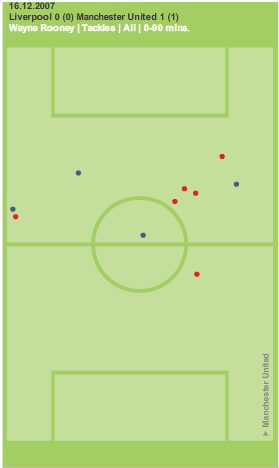 Wayne Rooney Tackles versus Liverpool in 2007

If I was to pick my formation for the Liverpool match, I would like to see a lineup of 4-4-1-1, with Rooney operating off Danny Welbeck – who’s physical presence and pace could cause Carragher and Agger problems. Nani wide right to take on the impressive Enrique and hopefully try and nullify his surging attacking runs – something that Antonio Valencia has done very well at down the seasons. Ashley Young should play wide left and will provide that attacking threat from cutting in onto his right foot to either unleash a shot or try and influence play and create space for Patrice Evra to bomb into. That leaves the two key central positions.

Fletcher and Anderson, for me, will provide the legs and energy whilst having the quality to keep the ball and make Liverpool’s quartet work for the ball. Anderson has superb stamina and will be key at tracking runs from midfield and will help to press high up the pitch, which in turn will put pressure on Liverpool’s deeper creative threats – like the direct Charlie Adam who does look to go long at times. The obvious aerial ability of Andy Carroll will be a threat to United, meaning that any outlet that could provide service will need to be dealt with. Fletcher will no doubt still be having nightmares from Wednesday night following another superb Spanish performance – but Scotland’s captain lasted 85 minutes in what was a monumentally hard task. He has always been an extremely fit lad and it was a big blow to lose him towards the end of last season following an illness.

I’ve also spoken previously about the introduction of Chris Smalling at right back in games that of a physical nature and sides that are dangerous from set pieces – which will no doubt be an issue with the delivery of Downing and Adam from corners and free kicks. However, much depends on the fitness of Nemanja Vidic, who played midweek for Serbia and missed a crucial penalty for his country – who will miss Euro 2012. Either Anderson or Fletcher will have to pick up deep Suarez, who will no doubt try and influence play closer to his own goal rather than on the shoulder of the centre half.

So, I would probably have a midfield four as follows, which of course is supported by the roaming Wayne Rooney: 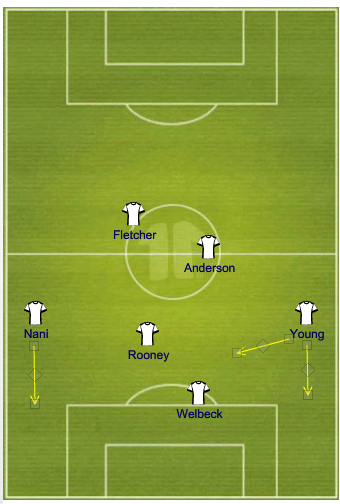 So what do you think? Will United lineup this way or will Ferguson opt for a 4-3-3 with Rooney as a lone forward supported by Nani and Young in wide areas? Will the pressing and stamina of both Fletcher and Anderson help to nullify Liverpool’s attacking threat from deep? Anderson and Fletcher can also initiate counter attacks and run with the ball through midfield before distributing to either of the front four.

Any comments/thoughts are always welcome in the comments box. 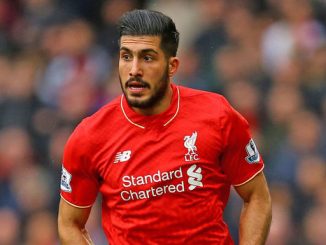 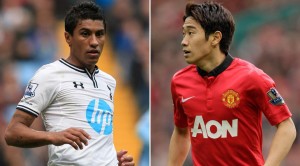 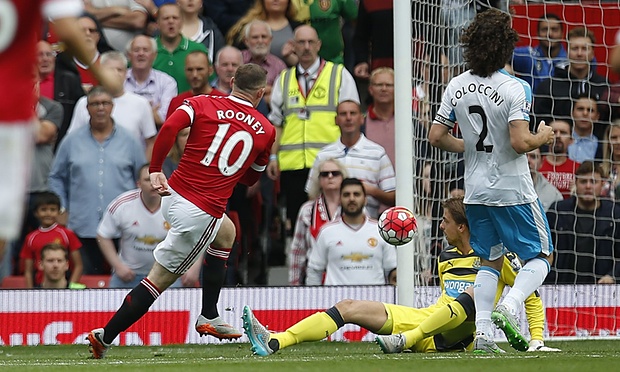