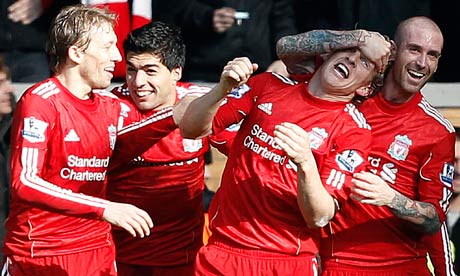 Ahead of the Liverpool game this weekend we decided to put various Liverpool-United related questions forward to serial tweeter and avid Liverpool fan, Mal Bennett. The topics covered include the biggest diver, the NextGen series and why Liverpool have had the edge at Anfield lately…

1. What do you think makes a Liverpool-United game so special?

It’s mainly the rivalry between the two teams vying to see who can be the best. The football is normally much better than at a derby (vs. Everton) because it seems to be about winning with flair instead of just winning at all costs. The sheer weight of history and success from both sides means whoever wins has a certain aura of superiority and historical self righteousness. You can see that in both the 4-1 Liverpool win at Old Trafford and the hat-trick Berbatov scored against us there too – easily the highest and lowest points of Old Trafford matches in recent years!!

2. Recall your best and worst memory from a United game at Anfield…

Best would be the match last year, a player who had never scored against you went and scored three of the easiest goals I’ve ever seen. Whilst Dirk Kuyt may have scored the goals, Luis Suarez was easily the most mesmeric player I’ve seen in a Liverpool shirt for close on 20 years in that game.

3. Why do you think Liverpool have had the edge in this fixture recently?

I think our regular winning at Anfield is more to do with the fact we’ve been the underdog. We fail to see the end of the match and play until you’re not only beaten but beaten down. There is a killing mentality to Liverpool in these games. Not content with just victory, we seek to deliver the killer blow again and again.

The history that both teams have plays a crucial part as well, neither team wants to be bested. There is a secret respect that both teams and fans have for each other, it’s definitely driven both clubs to try and wrestle wins from each other. The ‘perch’ quote from Fergie was jealousy and the hatred we feel for United is jealousy. But there is plenty of respect in there, (just buried very deep).

4. Give us your thoughts on the summer signings?

Doni is a decent backup keeper, nothing more. Henderson is a future midfield anchor and I’m very happy with his performances and commitment so far. Downing has probably pleased me the most, his wing-play has been a revelation to a team that hasn’t had it really since Barnes. Adam is special, he can deliver superb crosses, decent free kicks, penalties and has a good eye for a pass – he is Gerrard’s immediate replacement. Coates is a fantastic signing and I’m really looking forward to seeing him and Agger form a partnership. Enrique was an essential buy as the left back area has been a problem since Riise was sold. His pace and link up play with Carroll is crucial, as they showed at Newcastle.

There are some decent young lads that have been brought in too, Bijev and Nacho. Look out for these boys, they will shine for our youth team.

5. The Andy Carroll signing will always evoke criticism for the price, is that fair?

Of course it’s fair. Just like the £6 million paid for Bebe and the £32.4 million paid for Berbatov. We rate our players on how much we have invested in them. £35 million is an absurd amount of money for anyone, but then £80 million for Ronaldo is too.

Carroll will always divide opinion. We bought him last minute yet he had clearly been a target for Dalglish & Comolli. If we had the time we could have gotten him for much, much cheaper. I am under no illusions that Suarez & Carroll will soon be a strike partnership like that of Keegan & Toshack.

6. Is it at all worrying when someone like Reina hints more than once that he’s questioning his future at the club?

I am very disturbed about only one aspect of his recent excerpt in the Mail, that of the near move to Valencia. I understand why he wanted to move, as the misery had no end in sight but he came to that conclusion a bit too soon for me. Although, he has stayed and whilst his loyalty is questionable, his passion and belief for the club isn’t. He is Liverpool through and through.

7. Has Kenny really rejuvenated Liverpool? His record vs. Hodgson’s is almost identical.

Dalglish has a win percentage of 56% and Hodgson of 43% – a massive 13% difference. However statistics aside, there is no similarity between the two teams. Hodgson’s Liverpool were cautious, unoriginal, lacked any piercing attacking threat, defensively ancient and his training sessions were bordering on archaeological. Whereas Dalglish has brought in Clarke and Keen and started to rejuvenate the sessions. He has put a much greater responsibility onto the youth; the money invested and the time spent training them needs to start paying off. The belief of winning and of playing proper football is evident in some of the wins we’ve recorded. The last Anfield win against United showed a side that could confound even the Champions, a well worked win. I only expect to qualify for the Champions League this season, nothing more, a piece of silverware would be nice but not essential.

8. Is there an area of the team you think Liverpool are particularly weak in?

We are weak on the right hand side. Johnson is inconsistent, one week defensively brilliant and with great forward runs, the next week he may get caught short and his game is shattered early. Kelly is an injury risk at the moment, his injuries seem to take a length of time, it’s like that for Gerrard too, get him fully fit again before playing him. Playing Kuyt on the right or Henderson isn’t ideal. I would love to see Maxi get more game-time.

9. How do you think United can hurt Liverpool on Saturday and visa versa?

United getting down the right flank of Liverpool and exposing Carraghers tired legs is a very real risk. If Nani and Young play, they will swap sides and keep attacking Johnson.

I think Liverpool can expose Evans again. He really isn’t that much to write home about, if I’m honest. I think if we get the ball into Carroll and Suarez we will cause you massive problems, you just can’t deal with the pace of Suarez who’s also very inventive and incredible with the ball. He is the main problem for United

10. Beneath all the rivalry, is it possible to have respect for United or Ferguson on any level?

I respect Fergie 100%. His record is amazing. His longevity is outstanding. But in the modern game he wouldn’t have lasted past his first season. However, his belief in the young lads and his knack of getting the best out of them is almost without equal. I do like the football that United play though – it’s expressive and relentless. Something I see Liverpool do time after time yet without getting the result. Slowly but surely though, Liverpool are waking up.

11. Liverpool entered a team into the NextGen Series this season – what have you made of it so far?

I covered the NextGen tournament extensively up to the second group game, I had to stop due to illness. I was incredibly excited about Liverpool’s chances, the previous season we had missed out on the Academy league and the FA Youth Cup. There are some fantastic talents in that team and a good European experience will benefit them so much. Players to look out for are, Raheem Sterling, Adam Morgan, Kristian Adorjan, Tyrell Belford, Toni Silva, Michael Ngoo and Andre Wisdom. Big talents for both club and country.

The performances have been a little disappointing. The initial loss to Sporting was deserved, they are a very good team and top the group with three games to go. Liverpool need a win away to Sporting to stay in the competition, anything less will eliminate them.

12. Last year’s FAYC game at Anfield was one of the highlights of last season for me, have you high hopes for a lot players in the Reserves and U18s?

That match was epic. I was in the Kop for that one. The aggression, passion and skill from both sets of players was incredible. Ultimately we lost our focus and that cost us the game but I was more than happy with the performance.

This year I expect the U18’s to keep progressing, I’m not too bothered with winning anything, just as long as we lose playing great football. That might sound odd, but it’s all about development of body and character at that level. I don’t want the young lads to win trophies over developing the mental strength to fight and come back from losses. The reserves are something with which I find myself a little apathetic towards. It feels to me that they seem to just be a team for rehabilitation. I would sooner see them play in the lower leagues just like in Spain and Germany.

13. If you had to pick one player from the United team to play for Liverpool now, who would you pick and why?

I would love Nani to play for Liverpool. I know he is a big baby and an actor but his pace and goal threat from either flank is very impressive. Also impressed with Jones, Cleverley, Welbeck and Valencia.

Nani. Terrible big baby. To be honest though, I’m as exasperated with this aspect of the modern game as I am with the lack of goal line technology. There simply is no place for simulation, acting or cheating. It should be the number one priority for next season for all clubs and referees.

15. Finally, let’s have a score prediction…

Liverpool 3-1 United. I honestly cant see any change from the last match. I’ll even throw in the scorers – Suarez with two, Carroll with the other and Nani for United.

20 Comments on “LFC can expose Evans again, he isn’t that much to write home about”