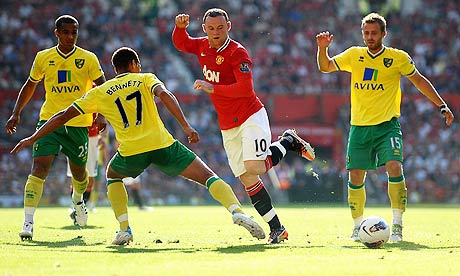 United set a new club record with a 19th straight home league win albeit in far from convincing fashion. Norwich had the best chances of the game and it took two late goals from Anderson and Danny Welbeck to ensure United head into the international break at the top of the table. For a change no fresh injuries were picked up and a Premier League debut was given to Anders Lindegaard in goal. Here we discuss some of the key talking points from the game and welcome discussion from both United and Norwich fans.

Another back four combination but one man stands out again:

Injuries to the defence this year has meant that the same back four has only been named in consecutive games twice – against Spurs and Arsenal. However, the extent to which injuries have disrupted United’s selection is maybe only apparent when the various back fours are put like this:

Yesterday’s back four of Valencia, Jones, Evans and Evra was the ninth new back four named in eleven competitive games this season. It’s therefore somewhat incredible that United have only conceded eleven goals or on average one per game. It does not though excuse the lacklustre displays from individuals at the back lately, it’s been too cavalier and often too sloppy. Yesterday was another example of space unnecessarily being available to opposition forwards and when Norwich counter-attacked United presented them with some wonderful chances to score. Anthony Pilkington missing the easiest of them all, skewing his shot wide when he had only Lindegaard to beat.

Jones once again showed glimpses of immense promise both in last ditch tackling and in direct driving forward runs. However, whilst much of the attention was on Jones’ erraticism, Evans was once again an assured presence on his return from injury. 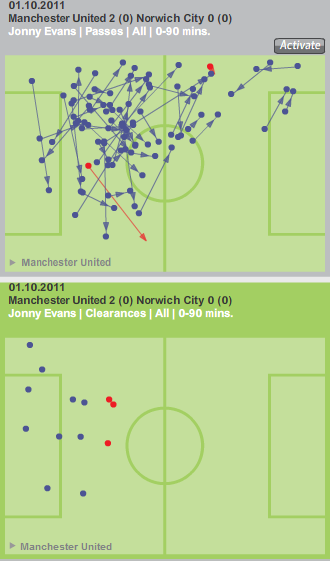 Jonny was assured in possession with 96% pass completion success but more impressively he won 10 out of 13 challenges resulting in a clearance. Along with Jones, he’s started more games than anyone at centre back this season and has been increasingly solid and reliable after 18 months of inconsistency and poor form. The signing of Jones and the progression of Smalling has clearly been a wake up call to Jonny who has responded excellently.

The regular changing will hopefully subside as injured players return though – a settled back four is the foundation for any good team.

There’s no clear indication of what is the best way to set up at Old Trafford when facing United and unable to compete in footballing terms. Some teams will try to attack United and get picked off on the counter-attack; some will try to kick United off the pitch usually without success; others will try and do what Norwich did for nearly 70 minutes – play deep, with discipline and organisation and frustrate United.

Norwich with men back

Norwich played with their two central midfielders sitting just in front of their defence, shielding them and frustrating United’s central midfielders, Anderson and Fletcher. With eight outfield players almost always behind the ball, it became seemingly impossible for United to break them down. Norwich’s deep tactics meant that Hernandez was stifled as space behind the back four was non-existent: 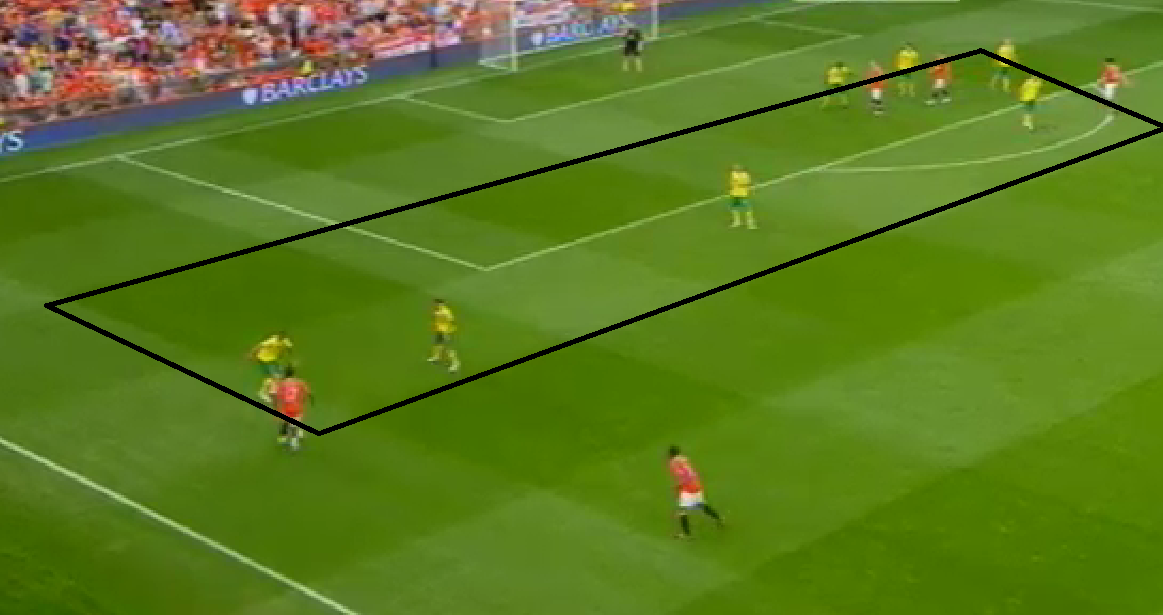 Norwich not allowing United any space

At times, as shown in the image above at times the majority of Norwich’s outfield players were all within two stripes of grass of each other. Some players were man marking whilst some were marking space. It meant that Hernandez had little space in behind the defence and it rendered Rooney somewhat useless in his more comfortable deeper role. Every time he dropped deep there was a sea of yellow shirts in front of him and no space to thread passes and attempt to dictate play. Instead, Rooney found himself playing higher up the pitch than he usually would: 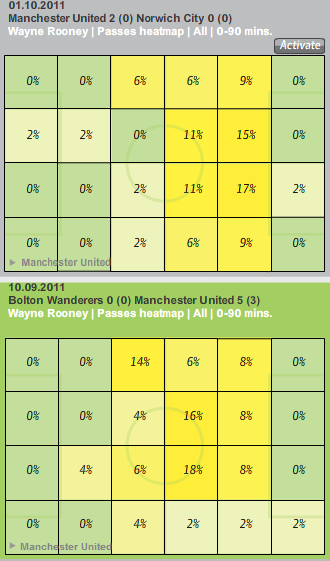 Rooney wasn’t alone in being denied the space he works best in – Nani and Hernandez both also suffered. Credit to Norwich though for getting their tactics spot on and implementing them well. However, as soon as United took the lead Norwich were unable to keep sustained pressure on United. As shown below, Norwich played only 36% of their passes from within the United half; by contrast, United played 60% of their passes from within the Norwich half. 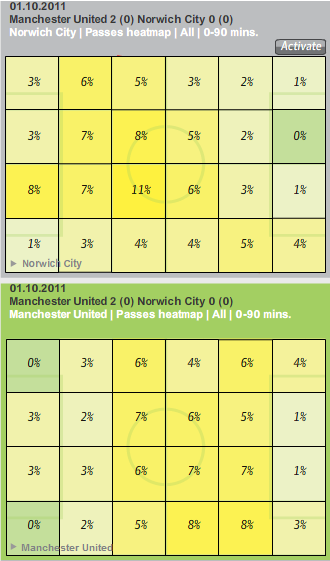 It’s a brave tactic from Norwich to have and clearly it’s only one they’d deploy away from home against the biggest teams in the league. However chance creation may be hard to come by and then they need a goalscorer to put the chances away. With all due respect, United gifted Norwich chances rather than being cut open by wonderful Norwich attacking play – and then no one was able to finish any of the chances off. With James Vaughan out for at least six months, Norwich may have to spend in January and try and get a goalscorer.

The good (Welbeck), the bad (Anderson), and the ugly (international break):

Danny Welbeck came off the bench to cap a good goalscoring week by getting United’s second goal after very unselfish play by Park. He now has five goals in eight appearances this season and stands every chance of being the club’s first long-term home-produced striker since Mark Hughes. To cap it all off, Welbeck has received a call up to the full England squad for their latest Euro 2012 qualifiers.

When United needed the breakthrough, of all the people to pop up with a header it was Anderson. It was quite telling however that in his post-match press conference with MUTV despite being prompted into praising Anderson, Sir Alex Ferguson somewhat dodged the question and wasn’t drawn into praising Anderson. Despite good early performances alongside Cleverley, Anderson has struggled since his injury and alongside Fletcher he seems to have regressed. 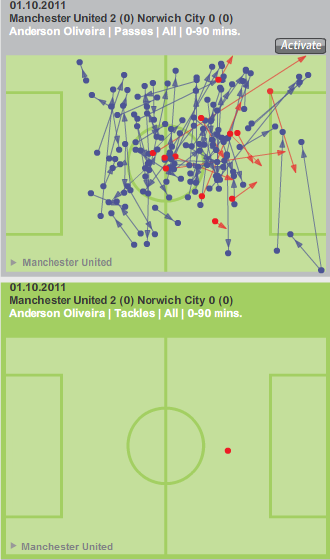 Despite a passing rate of 86%, Anderson played with little penetration and tellingly, most of the balls he gave away were in the final third of the pitch. He didn’t make a single pass from within the final third of Norwich’s half and generally played too deep. His work rate in attempting to win the ball back was also questionable with just one tackle attempted (and lost). One would expect a central midfielder to be attempting more than just 1/34 of the team’s attempted tackles.

In general, the international break has for a change, probably come at a good time for United. Vidic, Smalling and Cleverley should all be available for selection again after the break whilst the side in general needs time to work on some basics such as defensive responsibilities and positioning. Whilst the side haven’t lost, the past three performances against Stoke, Basel and Norwich have been far from convincing. The side can and must improve.

Looking ahead, October could be a very important month for United. In the league United travel to Anfield to face a hit-and-miss Liverpool side, fresh from a Merseyside derby win. Just three days after that test, United are off to Romania for what is now a crucial game against Otelul Galati in the Champions League. Following that it’s Man City at home, the top two (as it stands) meeting to battle it out for outright leadership of the league. A trip to Aldershot in the League Cup then separates the City game from an away trip to Everton – a place United haven’t won at in the league since 2007/08.

Norwich’s defensive set-up worked for 70 minutes but Anderson’s header from a couple of yards was enough to seal victory for United. As Norwich pressed for an equaliser, Welbeck combined with Park to make the three points safe. United didn’t have it all their own way though, long periods of possession were broken up by easy Norwich chances; on another day United could have been two behind with twenty minutes to play. With an international break coming up Ferguson will be able to concentrate on getting payers fit again as the schedule takes a step up with Liverpool and Man City to come in the next few weeks.