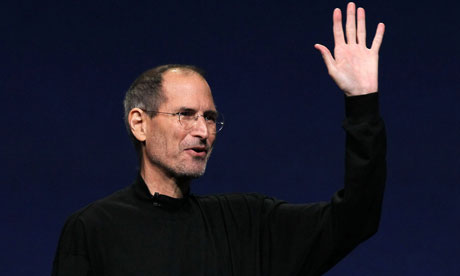 I’m not an Apple fanboy, in fact I probably dislike a lot of their products for their high prices, unnecessary apps and perceived “coolness” but like many I can’t help but admire the monster that Steve Jobs built. Upon hearing news of his passing, it occurred to me that the man I worship is not too dissimilar in many ways to Jobs. Here’s why.

Sir Alex Ferguson and Steve Jobs. Different industries but similar traits and similar success. I don’t claim to know a lot about Apple and I don’t know the specifics about how their success came about but one man’s vision became a reality with hard and often ruthless work. Where Steve Jobs had to battle against PCs, Microsoft, CDs, MP3s and every mobile phone on the market; Sir Alex had a battle on to bring overdue success to United whilst being faced with Liverpool, Arsenal, Blackburn, Leeds and later on, Chelsea and Man City.

The challenge to become the best is something that both Jobs and Ferguson thrived on. Pioneering technology and design, meet a culture of youth and sports technology. Whilst Jobs spent time at other companies since first co-founding Apple, Ferguson has remained at United ever since being appointed. Still, the loyalty each shows to their respective companies is rare in such a money-motivated cut-throat world (although there are far more examples of one-company careers in technology than there are in the world of football management; and even then, Ferguson of course came from Aberdeen, United wasn’t his first job).

Maybe the industries couldn’t be further apart, but then again they are quite similar. Technology has blown-up in the past 15 years and now moves at an instantaneous Twitter-like speed. Football too has become a product (sadly). Sky’s money and TV deals from abroad have seen more money in the game and more competition at the top level. Manager’s often last less than 18 months as the need to stay at the top level is greater than ever before. The products themselves are in every way global – The Premier League is now broadcast in 202 countries worldwide and no doubt can be watched on an iPhone in each one.

Because of this, the regularity with which both have had to reinvent them self is remarkably similar. Since the first iPod splurge just about 10 years ago Jobs has lead the redevelopment of it numerous times over, as he has with all their products in order to keep them fresh and at the cutting edge of what consumers want despite the challenges that Blackberry, Microsoft etc have put up. Similarly, Ferguson has rebuilt squad after squad, with youth always at the core but each side has been tinkered with to suit football at the time. One trait both Jobs and Ferguson have always ensured is central to any rebuild though is quality with attention to detail.

In order to get quality though, one hasto be ruthless. I’m yet to read “Inside steve’s brain” – a book my father gave to me this morning; however he tells me that Jobs comes across as frightening and almost horrible to work for. I’m not sure that Ferguson is horrible to work for but everyone is very aware of just how frightening he can (could) be. At either Apple of United, if staff haven’t met the high standards set then they’ve been forced out. Great leaders have to have that ability to know when’s right to move on.

This year, Apple became the biggest global brand for the first time ever (source: BrandZ 100 Report), similarly, United also overtook Real Madrid to be listed as the number one football team by brand value. Whether it’s Apple or Man United; iTunes or Wayne Rooney both brands and products are at the top of their game.

It would be wrong to suggest that Jobs and Ferguson solely built their respective empires. Both had a supporting cast and influencers. Yet, they are/were unflappably driven and have been raised to a level close to immortality by their supporters. Failure’s never been an option, football and technology are results driven industries. Ironically, technology has no doubt played a big part in ensuring that football today is about results more so than ever before.

Jobs recently resigned from Apple due to ill-health. Ferguson has always said only health can stop him from reigning in Manchester. Many people dislike Apple (myself included), ditto United (clearly, I’m not included) but it’s hard not to step back and admire what they are because of two men. Apple’s future should be secure because of the culture now ingrained into the company – it’s hard to imagine life at United without Ferguson even with the ideology he’s installed within. Let’s hope that day’s many years away. RIP Steve Jobs. Ruthless, driven, often dislikeable genius.

NB, I recognise United were something before Ferguson – please don’t comment suggesting I’m overlooking what Busby and the Babes built. However when Ferguson took over, United were in a fairly dark place and he has been central to what United are today (*grits teeth* along with the help of Kenyon and various others)