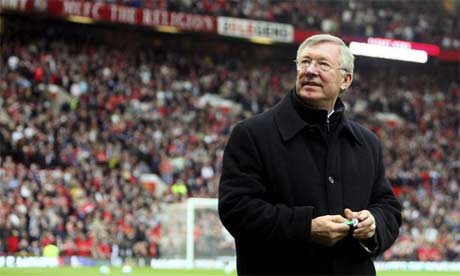 Sir Alex Ferguson was full of praise for his Manchester United side coming back from a goal down to beat the seven times European Champions 3-2 on their own turf. However, Ferguson was disappointed that United conceded a late back-heeled goal by Clarence Seedorf, the same Seedorf who scored the second goal in the San Siro three years ago to send United crashing out of Europe.

Manchester United scored their first goal against AC Milan in Italy and recorded their first win over the Rossoneri. Wayne Rooney scored a brace whilst Paul Scholes got the opener. Ferguson felt that in the first half, United were far too sloppy with possession and described events as a ‘catelogue of errors’:

It was a catalogue (of errors) but I think the start they made to the game helped them and made us nervous. But once we settled I thought we did okay. I said that we had to make better use of the ball and use Wayne Rooney more because I thought he had the measure of them at the back and he was fantastic in the second half.
The belief grew and getting the goal just before half-time was important

Ferguson described the final five minutes as a ‘carnival’ and admits that AC Milan have turn the tie ‘into a game’:

“I thought we were coasting at 3-1 and then there was a carnival at the end of the game. We were completely in control of the match and that second goal has made it a game that it shouldn’t have been.”

United and Milan meet again on the 10th March for the return leg at Old Trafford.

2 Comments on Sir Alex Ferguson has mixed feelings on result