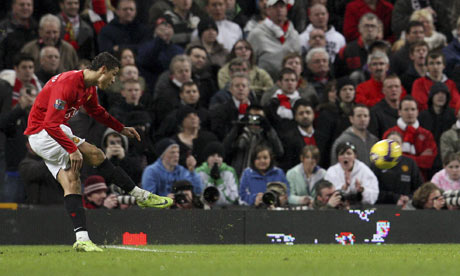 An eight point gap (now seven as Liverpool drew today) was created at the top of the table as Manchester United fortuitously ground out a 2-1 victory over local rivals Blackburn Rovers at Old Trafford.

The away side had to deal with plenty of pressure early on as both Givet and Nelsen made telling contributions to keep the game scoreless from some zipping through balls, but even Nelsen’s best efforts were in vain when dealing with Nani’s slide rule pass. The Rovers skipper got a touch but was unable to do anything when Wayne Rooney pounced to slot home.

Another goal could have followed soon after when Ronaldo and Carrick‘s quick move ended in a shot straight at Robinson from the Portuguese.

Old Trafford was stunned on the half hour, as well after 1,300 goalless opposition minutes, Andre Ooijer robbed the dawdling Nani and passed to Roque Santa Cruz. The Paraguayan forward took advantage of some slow defending from United to round stand in keeper Kuszczak and roll into the unguarded net.

Far from fire United or the crowd up, the Champions almost whimpered into half time, with Sir Alex Ferguson probably more concerned about the performance and way in which the goal was conceded with the Champions League tie at the San Siro looming than the loss of the proud defensive record.

However, right on the stroke of the whistle for the break, Jonny Evans headed in Nani’s corner, but referee Howard Webb ruled it out for a push, supposedly by Cristiano Ronaldo, that was impossible to spot in replays. It was clear to all that the decision was probably due to the fact that the corner the goal resulted from was wrongly awarded, but there had been a foul on Nani in the build up which made it a trio of bad decisions.

This was the first in a long line of contentious decisions by referee Webb as in the second half he first failed to spot a swipe by Ronaldo at a Rovers defender, and then booked the United number 7 for a clear dive on the edge of the box. Ronaldo’s 6 or 7 minute spell of controversy was concluded when he restored the Red Devil’s advantage with a truly sublime free kick from the corner of the box.

Blackburn could have taken the lead before Ronaldo’s strike as Nelsen hit the post and Diouf’s rebound effort was saved.

Webb then failed to spot a blatant kick out by Diouf and decided to not give a penalty after Gamst Pedersen fell to the ground ever so easily after contact with Rafael.

For television viewers it was somewhat of a nightmare as Setanta Sports colour commentator Craig Burley was on a one man mission to paint United as lucky beneficiaries of Webb’s howlers, consistently neglecting to mention the errors for Evans’ goal and Diouf’s kick.

United did manage to hold on to record a slim win which was probably only just deserved but, perhaps unfairly, the aftermath will focus on Webb’s performance as somehow gifting the Champions the win when his decisions had several negative impacts on both sides.