United played Chelsea for a fifth and final time this season. Chelsea needed to get something from the game to keep up the pressure on Spurs ahead of their big clash on Wednesday whilst United are champions already and although they had nothing to play for, a strong side was still put out, albeit with a few changes. As ever, we welcome comments from both sets of supporters.

We questioned Fergie’s use of 4-4-2 after our visit to the Bridge in early April (and indeed, Vidic’s rotation given Ba’s aerial threat), so it was good to see the manager start with a central midfield trio of Jones, Cleverley and Anderson, (with Giggs in a wide left role, and Valencia in his usual right wing berth), in what was essentially a 4-5-1. This allowed United to match Lampard, Ramires and the floating Mata in the centre (with Chelsea operating a typical 4-3-3 formation), and both systems were very fluid in attacking transitions, with both teams attacking in numbers – especially with both sets of fullbacks as ambitious as ever.

Importantly with this formation, Jones was able to shield the area in between the lines, where the likes of Mata and Oscar liked to drop into, and his anticipation was good for the most part. Anderson played just to the right of centre, with Cleverley to the left, and both sought to link the play with van Persie – more often than not by carrying the ball into the final third, taking the opportunity to burst through the centre where possible. Their defensive pressing was also a feature, and the game seemed destined to end goalless. However, the landscape changed on 68 minutes when Ferguson replaced Anderson and Cleverley for Buttner and Rooney, as United reverted to a 4-4-1-1 shape, with Giggs joining Jones in the centre and the Dutchman playing wide left. Jones’ shielding role was no longer, as he sought to attack when United had the ball and press high on Lampard when without it, ultimately leaving lots of space behind him and Giggs.

With Moses and Oscar swapping channels throughout the game, and Ba often coming deep to pull Vidic out, Mata inevitably began to see more of the ball and was able to get in behind United’s defensive line on occasion. Chelsea responded to the United change by swapping Moses for Torres on the left side, presumably as Rafael and Valencia were linking well in attacking areas, leaving space behind. Chelsea sensed the disorganisation and pressed much higher in the last quarter of the game, with Ramires in particular dominating the centre. In fact, it was the Brazilian who tracked back to thwart Rooney, before driving through the big space in United’s middle, and he flicked it back to Oscar who sumptuously deceived Evans and Vidic with a cute pass into Mata’s path. Jones initially had Mata marked, but was dragged inside to Torres which opened up the shooting opportunity. Though deflected, Lindegaard will be disappointed in his starting position, as he was unable to palm the ball clear.

Whilst the title has long been won, and Fergie rightly rotated his team for this game, there is still a sense of disappointment in terms of the lack of focus and output on display today – and in particular after 70 minutes. Fergie wanted to give Buttner some game time, and Rooney’s entrance should rather have been the attacking impetus we needed, rather than the tactical faux-pas it turned out to be; but there is no doubt that the reversion to two in the middle assisted Chelsea here. Giggs and Jones were simply passed by and were unable to press as a duo and United withdrew deeper and deeper as the game was stretched. Not as galling as the defeat in the FA Cup, but a defeat that saw Chelsea step closer to that Champions League spot, and one that put an end to United’s 67 game stretch of scoring in consecutive games staged at Old Trafford.

It seems more than likely that Rafael’s season is now over unless United decide to appeal against his red card for kicking out at David Luiz. Howard Webb came to the right conclusion over the incident and sent Rafael off. Webb’s job was unquestionably made easier by Luiz’s reaction to the incident – although Rafael kicked out, Luiz decided to jump up as if shot before hitting the ground, having a laugh and checking to see what was going on before rolling around again. In theory he’d done little wrong other than play-act to ensure Chelsea’s numerical advantage – had he gotten straight up, maybe Rafael wouldn’t have been sent off when he should have been.

Here’s what Fergie had to say on it:

“He [Da Silva] retaliates but Luiz quite clearly elbows him twice, then rolls about like a diving swan and that convinces the referee. He was smiling. It’s bad. What kind of professional is that? …It was rash what he [Da Silva] did, he’s a young lad and should know better but retaliation never works.”

Luiz has quickly been heralded as a hero by Chelsea fans on the internet. Mind you, I don’t remember them enjoying the play-acting of a certain ball-boy quite so much…

Anderson and Cleverley were brought into the starting line up after fairly lengthy spells away from it. Maybe harshly from Fergie they were expected to perform against one of the league’s best sides despite weeks and months out of the team. Not an easy ask at all.

Both would have benefited from Carrick’s presence behind them, a safety net that could allow them to push on with even more authority. Alas, it never quite seemed to work today. Often there was only van Persie ahead of them – too often isolated and forced to hold the ball up. When attacking they took different routes: Anderson opted to try and make some of the lower percentage passes work – ambitious balls over the top; whereas Cleverley was less risky, focussing on linking play over shorter distances.

Neither are particularly physical players but Anderson did try to put himself about, he just had little luck, coming off as the loser in many 50:50s. Cleverley’s shown more than enough this season to reaffirm he has a future at the club (incredible to think that’s even debated) whilst Anderson, although maybe needing to move on for his own career, may not be let go unless two central players are brought in to both improve the starting XI and add some depth.

For all the mocking Benitez gets, he now has a settled side and is getting results. It’s painful to have to give him any kind of praise, as I’m sure Chelsea fans are all too aware, but he deserves some. Somehow his players haven’t burnt out yet – Oscar is playing off the back of the Olympics and yet has clocked up over 60 appearances this season for example.

Benitez has learnt that he simply hasn’t got quality in depth that can allow him to make wholesale changes to rest player but his tweaking it now and then has paid off. Mata, Oscar and Hazard have all been given the odd game off whilst Luiz’s versatility has been made good use of. Should Chelsea draw on Wednesday against Spurs, a top four place should be theirs to go along with the Europa League final and FA Cup semi final. Chelsea fans will be loathe to praise him but a top four finish will be an improvement on last year when Di Matteo was also trying to balance out numerous competitions; and, it could of course see the return of Mr Mourinho.

After playing a strong side against Arsenal last week, Spurs fans in particular might have been hoping for more of the same again. To their disappointment, Fergie chopped and changed, removing three of United’s key players this season – Ferdinand, Carrick and de Gea. If last week he felt he had a duty to play his strongest side for the sake of the Champions League chasing teams, he’d had a change of heart this week.

Lindegaard managed to tip Oscar’s effort onto the post but otherwise it had been a quiet first half, albeit one Chelsea had been the better side in. The second half followed a similar pattern until Fergie altered the shape of United and Chelsea started to create openings as the game became more stretched. Mata’s winning goal was heading wide until it clipped Phil Jones; even so Lindegaard might have felt he could do better. The Danish keeper had a mixed game – some assertive catches and solid saves but plenty of flapping too and then maybe needed to do better at the crucial point in the game. For Chelsea, Mata was the one making things tick yet again. He’s undoubtedly been one of the league’s best players this season and is so vital to Chelsea as the stats prove.

The game ended on a low point for United as Rafael was sent off for kicking out at David Luiz who made sure that the referee know he’d been touched. It was a disappointing performance and sadly something that’s become all too familiar of late. The title may be decided but fans turned up to be entertained, not to watch players traipse around the pitch and offer very little in the way of attacking football. Swansea next week is the final home game of the season and will hopefully provide a few youngsters with a chance to play as well as maybe a farewell to a certain ginger.

NB: the goal has been officially given as a Phil Jones OG 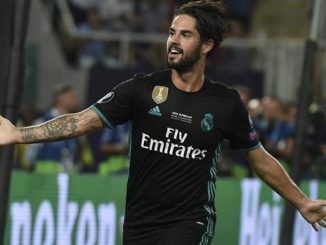 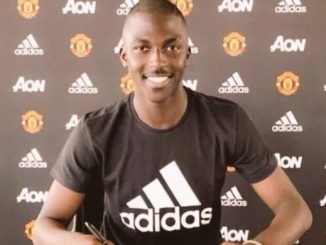