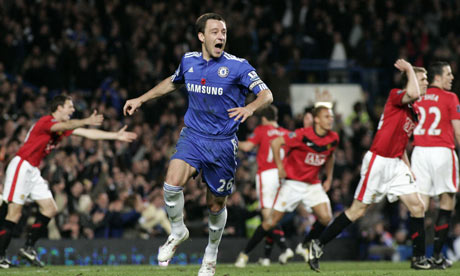 Ten weeks late. This game was due to take place back in December but wintry conditions saw it postponed. This should really be a mouth-watering clash between teams fighting for the title. Chelsea, the reigning champions vs. the league leaders. However with 15 points between the sides, Chelsea are all but out of any title race and their biggest challenge now is to guarantee a top four finish.

Champions by one point but few could argue. United shot themselves in the foot when Valencia missed a one-on-one at Blackburn and of course there were 6 points dropped against Chelsea (albeit with the help of some interesting refereeing). Chelsea though, lost the least number of games and scored over 100 goals; in Didier Drogba, Florent Malouda and Frank Lampard they had players in form for consistent periods of time – they became feared opposition for any team. It’s a different story this year though. Whether the decision came from the manager or the owner, experienced players left leaving a rather thin looking squad that was joined by Ramires and Benayoun. At kick off tomorrow, Chelsea will be 5th, and out of the Champions League places, only a win can lift them back into the top four.

It’s not for me to discuss Chelsea’s failings but their reliance on a small squad with unproven but talented youngsters as back-up is not a successful formula for defending a title. With little sign of putting a consistent run together, the board spent circa £75m in January on the classy defender David Luiz and prolific scorer Fernando Torres (despite him being rottenly out of form and seemingly always injured). The Torres impact probably won’t hit until next season but for now he’s yet to score for the club.

Chelsea, in my opinion, are likely to line up in their 4-1-2-1-2 formation. A narrow system that allows them to dominate in the middle of the pitch. It sees Mikel sit deep, breaking up play and passing the ball to one of Essien or Lampard ahead of him. The biggest problem for Chelsea may be in choosing from Drogba, Anelka and Torres. Of the three goals scored in their last four games, Anelka has two and so is the most in-form of the strikers. He however may be deployed at the top of their midfield diamond in order to accommodate both Drogba and Torres from the start. That said, Drogba was left on the bench in their last game and with only 5 goals since the start of November, he could miss out. Alternatively, I could be very wrong as media grumblings today suggest more of a traditional 4-4-2 may be deployed. Chelsea are all about power and strength. They pass the ball well and generally there is terrific movement from their front players which on many occasions, Lampard will pick out.

Chelsea come into the game having had a week to prepare. They had no weekend fixture and won convincingly away at FC Copenhagen in the Champions League last Tuesday. In the league in 2011 they’ve won only 3 out of 7 and haven’t won in two games now. At home, only United have dropped fewer points – Chelsea have taken 26 from a possible 36 points and no team has conceded fewer goals on home turf (8). Unlike last season, Chelsea aren’t top scorers at home this year, they’re haul of 24 goals is bettered by a few clubs. At present Chelsea are the 6th most in-form side in the league, taking 10 points from their last 18 but at home their form has been poor with only 8 points taken from their last 18 available.

Only Alex and Benayoun have been ruled out for Chelsea. Drogba and Malouda are their top scorers in the league, both with 9 goals. Fernando Torres has 3 goals in his past 4 appearances against United and his new side have had more shots on goal than any other team in the league. By contrast, United have allowed the fewest number of shots on goal by opposition sides. Chelsea have only conceded four headed goals all season whilst United have scored 14 – the fewest conceded and the highest scored – stats courtesy of Opta

Much of the attention may be on Ashley Cole who made the press at the weekend for shooting an intern with an air rifle.

It’s one of those games where I just can’t decide how we’ll play… so if Chelsea play a 4-1-2-1-2 then I think United will line up like this: However if Ferguson thinks Chelsea will line up in more a traditional 4-4-2, I think we may line up like this: Of the two formations above, I think it’s generally agreed amongst United fans that the 4-4-2 suits the side better – not to forget that Sunderland had success playing that way at Stamford Bridge. However the 4-5-1 system also brought Liverpool a lot of success playing their recently as it allowed their full backs to get high up the pitch.

Starting with the team news. Rooney is available after the FA didn’t charge him for an elbow incident against Wigan. Giggs trained today and should be fit. Ferdinand, Evans, Park and Anderson are all definitely out. Owen is a doubt whilst Valencia’s involvement would be a surprise despite the fact he’s in full training again. Rumours that Hargreaves has been training for some time remain unconfirmed and on the ground he last played more than 5 minutes on, any return is almost certainly unlikely! O’Shea may be the other doubt as he appeared to be limping at the end of the Wigan game but given that no one has said anything to suggest he’s injured, he’s been included in my teams.

In front of Edwin (providing he’s fit) I’ve picked O’Shea. His height, presence and experience are valuable in a game like this.Smalling should continue to line up next to Vidic with Evra at left back. It would only be Smalling’s 9th league appearance of the season, and arguably his toughest to date.

Based upon my choice of a 4-5-1, I think the midfield somewhat picks itself. Scholes would sit deep to control the play with Carrick and Fletcher ahead of him – Fletcher put in a wonderful performance in this fixture last year. I expect Nani to start out wide with the returning Giggs on the other wing. Up front, I’ve plumped for Rooney given that he’s clearly been favoured in the lone role this season. Berbatov’s place on the bench though at Wigan may suggest otherwise.

Should a 4-4-2 be played then I think Scholes would be partnered with Fletcher. The wingers remain the same as before. Berbatov and Rooney would start up front although I’d actually prefer a combination of Chicharito and Berbatov. The pair have worked well together when they’ve played. Leaving Chicharito out would of course be harsh on him given that he got 2 goals at the weekend and has 6 in his 8 league starts in his debut season.

United remain top having won at Wigan at the weekend. It’s now four games unbeaten since the defeat at Wolves – still the only blotch on the league record. Having been knocked out the FA Cup, Chelsea play Blackpool 6 days after United then have a nice break until their return Champions League tie. For United however, this is a crucial period. They’re at Anfield on Sunday and that is followed by an FA Cup quarter final and the return leg against Marseille.

Recent form shows United sitting second in the form league with 15 points taken from a possible 18 in the last six games. Whilst the home form has been impeccable, their away form hasn’t been as impressive. In 13 away games, only four have been won with eight drawn. The problem as much as anything seemed to be scoring goals with only 18 scored on their travels until Saturday’s four at Wigan upped that to 22 – the joint second highest in the league. In actual fact United’s current away form has been good. 11 points from the last 6 games is the joint best in the league.

In Dimitar Berbatov United have the league’s top goalscorer (19 goals) and in Nani the league’s top assister (14 assists; Rooney is joint 2nd with 11). Berbatov and Nani alone have scored 28 league goals this season – one more than the entire Wigan team. United are the Premier League’s top scorers, with 61 goals in 27 matches. United also have the best record in the division against top-half opposition, winning six and drawing five of their previous 11 matches this season. Should Ryan Giggs play tomorrow, he’ll equal Sir Bobby’s club league appearance record of 606 games – a day before the 20th anniversary of his debut for the club. These moments just through up incredible coincidences, for it was at Stamford Bridge that Sir Bobby played his final United league game (thanks to Rick Glanvill for that fact).

United’s record at Stamford bridge isn’t pretty. 18 Premier League games there have yielded only 18 goals scored and 4 wins (with 7 draws and 7 defeats). It’s nearly 9 years since a last league win there during which time Chelsea have won 5 games and drawn 3. In fact in 5 of the last 7 visits to The Bridge, United haven’t even scored. A win will not only make those stats look better, but will create some history – another defeat would be the most ever by defending Premier League champions. The 7 defeats Chelsea have suffered this season represents the equal-most they have lost in a single campaign since Roman Abramovich bought the club.

This is a tough game regardless of the season Chelsea are having. United were good for their win in the Charity Shield over Chelsea this season but that was played like a pre-season friendly. Usually I’m optimistic and predict a win but, for this game I predict a 1-1 draw.

You can share with us your thoughts ahead of the match and your favourite moments from games away to Chelsea on our forum.

Finally, I know it wasn’t a game at Stamford Bridge and I know it was in a different competition, but… (enjoy)…