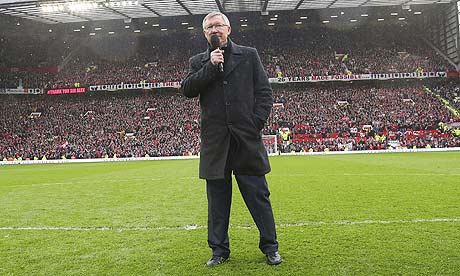 Life is an ever decreasing circle. The older we get and the more we experience, the closer we feel to the end. We need things in our lives to lift our spirits and take us to heights that everyday existence just cannot do.

Ever since I’ve been hold enough to understand, I’ve been fortunate enough to be surrounded by a football mad family and friends. It became all encompassing at one point with me running a team as well as following United.

United have always been the heart and soul of my football love and the genius behind this was Sir Alex. Growing up seeing one fantastic team after another take on the best of England and Europe, taking defeat on the chin and going again. It’s a true metaphor for anything in life and its safe to say that football has an impact on our lives that other things cannot come close to.

In the very worst days of my short 30 year existence, when I have felt that life is becoming uncontrollable there has always been Manchester United. For me Sir Alex is Manchester United and today felt that a large part of my life that has now finished. For differing reasons I have shed tears at the last two United home games and today it was because I will never feel the same for football like I did for the last 25 years.

I and other United fans of my generation have been some of the most fortunate people to follow a football club. We have experienced 5/6 high points for every 1 low point. A setback usually resulted in the bar being raised the season after. The one constant in everything growing up was United being at the very top. As I’ve gone from school youth, spotty teenager, love struck fellow and finally husband, I’ve always been able to rely on Sir Alex to be there bringing me football other fans could only dream of.

Seeing Sir Alex step out today to the acclaim he so richly deserves and the realisation that this is it was a hammer blow. You become so used to knowing that the team and the boss are there that it becomes difficult to imagine it coming to an end. The thing you assumed would always be there was no stepping away. Sure we’ve lost great players, Cantona, Ronaldo and Keane but you always knew Sir Alex had a plan and it was more than likely going to work. Now the Godfather is no more and we have a new leader.

The new leader may turn out to be fantastic but he’ll never be the leader we had. The fact it’s been referred to as ‘The Impossible Dream’ tells you the challenge facing David Moyes. That debate and discussion is for another post however.

The certainty of having United to brighten those dark and slow days still remains but the confidence of success is not the same.

I don’t feel I’ve been a proper football fan until today. Other clubs and fans have experienced the upheaval and uncertainty of a new leader or regime. This is my first experience of such a moment. Next season will be a new way of supporting the team. Many fans go to games expecting success and greatness, the guarantee of this is not what it was. The team will require our backing all the more.

The cheers and happiness of win after win brightened my days, from next season it’ll be being there and showing the team we are with them all the way.

Sir Alex has given me something I cannot fully describe but has kept me safe. From now on I’ll need to give this team so much more of myself and become there shadows on the pitch.

Providing comfort and security for a team and fan base largely entering the unknown.

It’s been a hell of a ride Sir Alex and i personally cannot thank you enough.