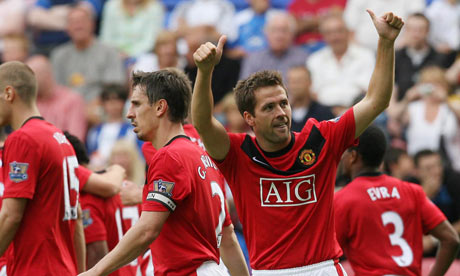 Twenty points separate league leaders, Man United and relegation fighters Wigan. The task facing Wigan is a big one, every time they’ve met United ever they’ve lost – only a win can take them out of the bottom three on Saturday. Whereas for United they will look to once again open a four point gap over second-placed Arsenal.

Last season wasn’t one to remember for Wigan. They finished 16th with 36 points; won only 9 games and conceded a whopping 79 goals. In came Spanish manager, Roberto Martinez and results have barely improved. The club are 18th with twelve games remaining. Winning games and scoring goals has been a problem – along with West Ham they’ve won the least number of games (5); and scored the joint fewest goals (27 – the same as Birmingham). On the flip-side; this is a Wigan team who try and play neat passing football; unfortunately there are countless examples of teams at the bottom who have tried to play like that but have ended up going down.

What to expect from Wigan? There’s no doubt Wigan will try to beat United. At this stage of the season there is little point in Wigan at home trying to settle for a draw. The newly laid pitch at the DW Stadium will allow both teams to pass the ball around. Wigan will be missing Tom Cleverley, on loan from United but instead will look to Charles N’Zgobia for inspiration. He, Ben Watson and youngster, James McCarthy have stood out at times this season. Martinez has tinkered between a 4-4-2 and a 4-5-1 – I expect a 4-5-1 to be played tomorrow with Rodallega leading an industrious midfield.

Wigan come into the game off the back of a defeat at home in the FA Cup to Bolton, but in the league they are 3 unbeaten – their last defeat coming a month ago. Avoiding defeat against United will equal their longest unbeaten run of the season. Against the bigger sides in the league, Wigan haven’t done too badly – a draw against Arsenal, two draws against Liverpool and a win away at Spurs are the stand-out moment. Few however could forget the 4-0 trouncing they received at home on the opening day of the season against Blackpool. It’s not that Wigan lose too many games, just they seem unable to win – 12 games drawn is symptomatic of a team struggling, especially when six of those have come at home. At present, Wigan’s home form is the worst in the league with only 6 points taken from the last six games.

With the exception of Tom Cleverley, Wigan have a squad close to full fitness to choose from. Emmerson Boyce will face a late fitness test for a hamstring injury whilst youngster Callum McManaman is likely to miss out due to a large cut on his leg. If striker, Franco di Santo plays it’ll be his 20th appearance for the club – he’s yet to score for them and only has 1 goal in 60 professional matches so far in his short career. There is a potential milestone for Maynor Figueroa, he is in line for his 100th Premier League appearance.

Wigan have never beaten United in 12 games. They’ve conceded 37 goals and only managed to score 4. Three of those four have come in the five away league games at Wigan. Last year this fixture ended 5-0 to United in a one sided affair. The stadium has happy memories for Reds as United won the league title there in 07/08 when Giggs equalled Sir Bobby Charlton’s appearance record. A year later United won 2-1 as late goals from Tevez and Carrick all but sealed another title triumph.

Enough on Wigan…onto United and my predicted line up: I think United will line up in a positive 4-4-2 formation. We’ve not seen it much away from home but there’s little doubt it suits United better and will allow for better attacking football.

The team news is somewhat frustrating. Ferdinand and Evans remain out with both unlikely to be fit for the Chelsea game either. In the midfield there is again a lack of width with Valencia not ready to return, Park injured and Giggs a doubt (but unlikely to be risked with the Chelsea game coming up). Anderson’s knee injury will keep him out for a further three weeks and there is no new news on Hargreaves. On the plus side, Owen returns to the squad and could be involved.

In front of Edwin I think Rafael will be favoured over O’Shea, but aside from that Smalling should line up next to Vidic with Evra at left back. It would only be Smalling’s 8th league appearance of the season but already he’s looked very assured and has recently put in huge performances against City and Marseille. Certainly to have a consistent pairing of him and Vidic with the Chelsea game coming up would be good.

Based upon my choice of a 4-4-2 and there only being one fit first team winger I’ve gone for Gibson to play a wide right role. In reality Gibson is likely to tuck in to make more of a central midfield three with Rafael bombing up as a full back/winger. There is a good chance Obertan may be given an opportunity to put the Crawley game to bed, providing natural width. The other alternative is to use Rooney wide again. Despite Scholes being used as a sub in Marseille, I’d save him for the game at Chelsea and have him on the bench. There is a good argument of course that says start him and sub him off but I’d feel more comfortable if we didn’t have to play him at all. In which case Fletcher and Carrick make up the middle pairing with Nani wide left. Up front I’ve picked Berbatov and Chicharito, allowing Rooney a break ahead of the big game at Chelsea. With Owen fit, he too could play a part, Ferguson hinted as much today in his press conference.

United remain top having won their last league game against Man City. It’s three games unbeaten since the defeat at Wolves – still the only blotch on the league record. For both Wigan and United the next few weeks are crucial – United play Chelsea and Liverpool away; whilst Wigan face United, City, Spurs and Chelsea in four of their next five matches. I have the Chelsea game on my mind when picking the predicted line up for tomorrow.

Recent form shows United sitting third in the form league with 13 points taken from a possible 18 in the last six games. Whilst the home form has been impeccable, their away form hasn’t been as impressive. In 12 away games, only three have been won with eight drawn. The problem as much as anything seems to be scoring goals with only 18 scored on their travels. In the last six away league games, United have picked up 9 points – form only bettered by Spurs and Arsenal.

In Dimitar Berbatov United have the league’s top goalscorer (19 goals – Tevez is second with 18 goals) and in Nani the league’s top assister (13 assists; Rooney is joint 3rd with 10). Berbatov and Nani alone have scored 28 league goals this season – one more than the entire Wigan team. United’s defence have generally enjoyed games against Wigan with The Latics only scoring one goal in their last seven matches against United. The 57 points United are currently on after 26 games is exactly the same as after the same number of games last season. Edwin van der Sar will make his 250th appearance for the club if he plays.

United’s record against Wigan has been excellent but the away form this year says this shouldn’t be easy. I think United will put in a rare good away performance and I predict a 4-1 win for the Reds.

You can share with us your thoughts ahead of the match and your favourite moments from games away to Wigan on our forum.