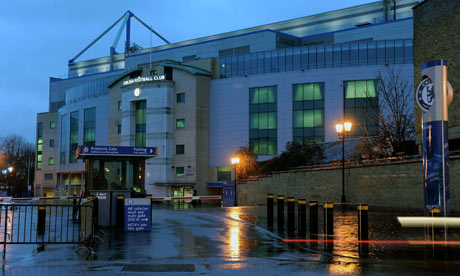 In 1996, Middlesbrough were docked 3 points for failing to fulfil a fixture. The club postponed their fixture with Blackburn at “short notice” with Bryan Robson citing that an illness epidemic meant he wouldn’t have enough players to field a team.

The statement on the official Chelsea website read “Sunday’s game at Stamford Bridge has been postponed following consultation with the Police and the local authority.”

There were suggestions online (mainly Twitter) that it was a “conspiracy” for Chelsea to get out of playing United with the two teams in their respective form, while it was clear yesterday that the game could have been played after the conditions improved. I don’t agree that it was a conspiracy – Chelsea may have lots of money but they can’t pay mother nature to unleash a torrent of snow from the sky – but surely the timing of the decision, and who exactly made the decision, must be questioned?

I’ve read opinions and heard opinions from supporters who suggested Blackpool shouldn’t have been allowed in the Premier League without undersoil heating. Again, I disagree, it’s the thing I always argue – there’s no point complaining only when it effects you. The rule is the rule, if you had a problem with it you would surely argue about it anyway. Not only when you’re directly effected. Undersoil heating as a pre-requisite for a promoted team is something that should be discussed alongside clubs having all-seater stadiums in order to be allowed to compete.

Obviously, however, there are circumstances so peculiar that they can only really be investigated on the merits of that particular case. The Premier League have declared themselves satisfied by the decision to postpone despite the fact that all the conditions in place were suitable to host the game. Travel situations, the surrounding area, everything was fine. It begs the question, how far in advance can a club postpone a fixture?

What if a team gets an important player suspended or with a knock, can they take a look at the weather forecast and if they see snow, see if they can back out?

I was in central London over the weekend and although it was easy to see there was no way the Arsenal game could be played, the subsiding of the snow around 3pm on Saturday – only around 2 hours after the postponement – lead most supporters to believe the game could still be played. There was no need to make such an early judgment, particularly as it turned out to be a flawed one. It’s not just the circumstances of the game (to be fair, it wouldn’t directly effect United to punish Chelsea, as the 3 points on offer would not be awarded to us even if the Blues were reprimanded) but that of the supporters; many had travelled to make a weekend of it, many were willing to travel with expensive train tickets that they can’t get a refund on.

I can understand there being a health and safety issue but I feel the game was called off too hastily. Chelsea easily could have asked for the decision to be reconsidered on the Sunday morning. This would have allowed them to work in partnership with the local council and the police to grit any pavements that were causing concern. This was something United did last year for the FA Cup tie against Leeds. Whilst the snow wasn’t as thick, the ice was definitely thicker and more of a danger. United worked hard to grit the surrounding areas with the council to make sure the game was not postponed and it went ahead. There was no reason as to why Chelsea could not do this too unless of course they were keen to avoid attempting to put the fixture on. Some good spy work by the team at The Republik of Mancunia discovered that the pavements were in fact fine – click here to see the CCTV pictures of the Stamford Bridge area on Sunday.

In my opinion – and that’s all it is – Chelsea failed to fulfil a fixture on Sunday. One can only imagine that if they were the form team sitting top of the league that they may have made more of an effort to get the game played. Middlesbrough were docked points after a retrospective investigation; with such overwhelming evidence to suggest the game could have gone ahead, the Premier League owe it to the integrity of their own rules to at least have a proper look at it.

9 Comments on Did Chelsea fail to fulfil a fixture?