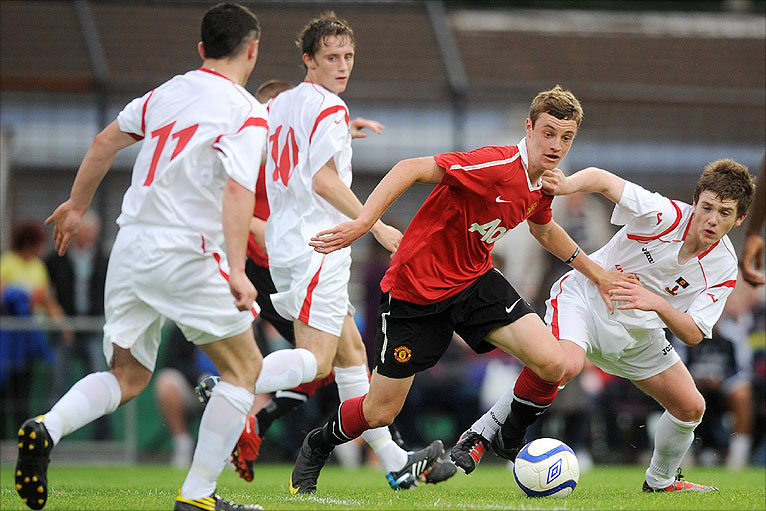 In this latest introduction to the United Reserves and Academy players I feature the winner of last year’s Jimmy Murphy Young Player of the Year award, William Keane…

Background – Keane, born locally signed scholarship terms with United in July 2009 along with his twin brother, Michael. Good form meant that on his 17th birthday William signed professional terms with the club – one of many that year, making it the first time since the ‘class of 92’ that so many of the Academy players would sign professional contracts on their 17th birthdays.

Position -William is a centre forward. When in a 4-5-1 formation, he plays right up the top as an out-and-out striker. However, in my opinion, William seems to prefer to play a little deeper. When up front with a partner he likes to drop behind the other striker and become the link man between midfield and attack. William’s versatility stretches further though. On duty for the England U17s he has often been used in the wide roles as part of a 4-3-3 formation. Furthermore, he’s looked comfortable playing there.

Strengths – He is an excellent finisher. He always seems composed in the penalty area and never rushes. His finishing is helped by the fact he’s good at buying himself time. Although tall and a bit gangly he seems to ghost into positions unmarked. The timing of his runs make him hard to pick up and he has acquired the knack of being in the right place at the right time. However, as I mentioned, he likes to play deeper. He always wants the ball, for someone so lanky he’s incredibly comfortable with the ball at either foot. His vision and ability to pick the correct pass makes him a superb candidate to be playing the ‘no.10’ role. I see William as someone who plays for the team, often this is lost a little bit at Academy level as the technically talented players tend to try and do too much on their own – however, quite the opposite, William is brilliant at bringing his teammates into the game. It’s a big bonus for United that they have someone so comfortable just behind the striker yet so good at getting into goal-scoring positions – as shown by his return of 13 goals in 23 starts for the Academy last season, which included a hat-trick against Man City.

Weaknesses – Three things spring to mind – pace, strength, aerial ability. Not all players are quick and this isn’t a criticism of William, but he isn’t a fast centre forward. Once beyond the last defender he usually has enough pace to hold him off but he tends not to burst through. As with many Academy players William is developing physically at the moment. He’s yet to add much muscle to his gangly frame. He’s not however easily shrugged off the ball due do his excellent control but it would make him even more of a threat should he bulk up. Finally, for someone his height, he really is poor in the air. Some of this may go hand-in-hand with not being strong but he tends not to challenge for many headers and when he does he doesn’t usually win them. It’s fair to say his best work comes from his feet!

Player comparison – I see quite a lot of Berbatov in his languid style, but he’s much more of a worker than Dimitar. His finishing has been compared to Solskjaer but the all-round comparison I like, which I think is a reflection on how clever he is, would be to compare him to Sheringham.

Present – Last year ended with William being involved with the Reserves as well as the Academy. Furthermore he finished up as a European Champion as part of the successful England U17 team. He has now added to his 3 U16 and 15 U17 caps by becoming part of the England U19 team (where he’s included as a midfielder). With a plethora of strikers in the first team needing minutes all the time, he may find his Reserves appearances limited this term. He is very much a part of the Reserve squad whilst he continues to shine at Academy level. I suspect he is too young to be considered for a loan and certainly the club will want to keep a close eye on how he’s developing physically. I expect him to keep plying his trade in the Academy with (hopefully) frequent flirtations at Reserve level. There’s even a very outside chance that with Joshua King out on loan he could force his way into a Carling Cup squad; however the early season form of John Cofie may put him ahead of Keane.

Bizarre Fact – Whilst he’s of no relation to Roy Keane, he is eligible to play for the Republic of Ireland – something his twin brother, Michael has opted to do. There is therefore a chance that they could end up playing against each other in a youth international.

Prediction – The biggest compliment to William Keane is that he’s had direct praise from Sir Alex Ferguson. There is no doubting he has talent. It’s a bit early to be able to safely say what level he’ll eventually end up playing at. For the moment he needs to have another good season scoring and creating goals – it’s not a bad habit to get into!