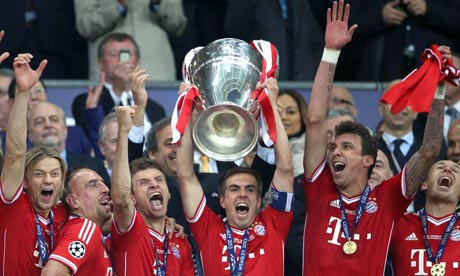 Yep. Its finally here. Three times European Cup winners Manchester United take on reigning champions Bayern Munich, who are gunning for a sixth victory in this season’s competition. Having already wrapped up the the Bundesliga title with a laughable twenty-eight point gap over last year’s beaten finalists Borussia Dortmund, Pep Guardiola and his men will be fairly confident about progressing to the semi-finals of the tournament. With David Moyes under a severe amount of pressure, the European title is the only trophy left for United to win this season, although – in the way – are arguably the best team on the planet at present.

The best side in Europe
It would be hard to argue otherwise. Bayern have only lost two competitive games all season. The first was right at the start against Dortmund in the Super Cup. The second was against Manchester City, who had trouble with their maths that night. They are unbeaten domestically and boast an attacking foursome of Mandžukić, Muller, Robben and Ribery who have notched up 48 goals between them this season. Add the guile and dribbling skills of Mario Gotze to the mix combined with the creative Thiago and the perfect number 6 in Toni Kroos – the team from Bavaria strikes fear into all who stand in their way.

In the past four matches, Guardiola has opted for his favoured 4-3-3 (or 4-1-4-1 at times) formation that blew most of Europe away at Barcelona for the majority, whilst switching to a 4-2-3-1 (the formation they used to conquer Europe last term) against Arsenal for the home leg. The favoured son of Catalonia had two key principles when at Barcelona, to press and the flexibility of his players. Gotze has played through the middle, either as the main forward or as the number ten, whilst club captain Philipp Lahm has been deployed as a holding midfielder – despite years of applying his trade as a galloping full back. A young Lahm, on loan from Bayern Munich, was also part of the Stuttgart that brushed aside Manchester United in 2003.

To make matters even worse, the bloke that every football fan wants at the helm of his club who happened to win fourteen trophies at his first top managerial post and who wouldn’t look out of place in GQ magazine, hasn’t had a single player sent off this season. Yep. No red cards. If Guardiola is the GQ of managers, then David Moyes is currently an unused mannequin at the back of a dusty Matalan store. His only win, against the current top ten teams, came against Arsenal in the 1-0 victory back in November.

Some Reds are calling for his head, many other Reds believe he needs to be given time to build his own side. His dismissal of a title winning back-room staff didn’t help, whilst Edward Woodward – last seen paddling back to Manchester from Australia in a rubber dingy – showed his naivety in the transfer window last August. Yes, Manchester United picked up a superb playmaker in Juan Mata, who is ineligible for this season’s Champions League due to the January transfer purchase. Moyes needed reinforcements and he didn’t get them.

Its ironic that Thiago, who was heavily linked to the move to Manchester United in the summer, is one of the star performers for Guardiola. “Thiago or nothing!” cried the new boss. He got his man, whilst United paid £6 million more for Fellaini a month later. United fans thankfully won’t get to see the midfielder in action as he will miss up to six weeks after picking up a knee injury at the weekend.

Replacing a title winning manager and legend of the game isn’t easy, however the Bayern Munich boss hasn’t done a bad job since taking over from Jupp Heynckes. Sir Alex Ferguson’s successor will look at his opposing number on Tuesday night in the knowledge that he has won 84% of his games since taking charge and his side have won a record ten away games in the league. Over to you, David.

Past glories and hope for United yet
Big European nights are the thing every fan dreams of. The 1-0 victory over Barcelona in 2008. The 7-1 thrashing of Roma the season before. The epic 3-3 draw with Barcelona back in 1998 or even, if you can go that far back, the 2-2 draw with Real Madrid in 1957. There is nothing better for a football fan than watching a special game unfold. Bayern Munich have had their share of special nights as well. Winning three European Cups on the bounce in 1974, 75 and 76. Beating Atlético Madrid (Pepe Reina’s father let in a howler in the first match – Bayern won the replay 4-0), some club called Leeds United and Saint-Étienne.

The 70s was an odd decade for the European Cup. Inter Milan, Benfica and Real Madrid had won back to back trophies in the 60s, but fast forward ten years and only Feyenoord (in 1970) won the title a single time. Ajax, Bayern, Liverpool and Nottingham Forest made up the rest. Many are tipping Bayern to be the first side to win two back to back trophies, the first time it will be done in the Champions League era – with AC Milan the last in 1990 under the guidance of Arrigo Sacchi. In the nine times the two clubs have met, United have only won twice – with of course, the most famous one coming on 26th May 1999.

The last meeting was of course the 3-2 victory over Bayern, but with the visitors going through on the away goals rule having beaten United 2-1 at home in the first leg. At the time, many journalists and pundits thought this was the end of Premier League dominance, which of course had seen an English team in the final for the past five years – however, United bounced back to get to final in 2011 only to lose to arguably, the best side that have ever graced a football pitch. Rafael’s second yellow changed the course of the game, as United were absolutely hammering the German side and led 3-0 inside half an hour. Robben, who I have always thought was one of the best wingers of his generation, scored an absolute stunner of a goal – to put the Germans on course for the final in the Bernabeu (where the eventually lost to Inter Milan).

That might well have been the first final of three the German Champions would contest in four seasons, however – it wasn’t all rosy in the tax dodge haven of Uli Hoeness’ empire. Bayern suffered the ultimate humiliation in 2006-07, around about the time Cristiano Ronaldo was firing United to a first title in four season, of missing out on Champions League qualification and finished fourth. As Carlo Ancelotti once described it for his Milan side, Ottmar Hitzfeld’s (then Bayern’s coach) team faced “a year in purgatory” and the Europa League – something United could well be playing in next season – although, that is even unlikely.

FC Hollywood went out and splashed the cash on Italian striker Luca Toni, Franck Ribéry, Ze Roberto and Miroslav Klose. This investment for players helped Bayern to reclaim the league title with Toni notching up an impressive 39 goals in his debut season. United are of course going to miss out on Champions League football next season, unless somehow Moyes can lift the big one in Lisbon on Eric Cantona’s 48th birthday, but Bayern responded like only true Champions do following a setback. The same way Sir Alex Ferguson bought in Jaap Stam and Dwight Yorke in 99, Rio Ferdinand in 2002 and Robin van Persie in 2013 – to then go on an win the following season. Will the Glazers, unlikely as it is, cough up funds to invest in a playing squad that is desperate need of investment? Would you want David Moyes in charge of a transfer war chest?

Setbacks happen in football, especially after a legend of the game retires, but it is how you respond to those setbacks that marks you from the rest. Time and time again Sir Alex Ferguson’s men would bounce back from a setback, you could even suggest that losing was more of a motivator than actually winning. There is no arguing that this is a dreadful season for Moyes and United so far, but history is full of set backs – it just depends if United will follow in the footsteps of their German opposition in the seasons to come.

Team News
Manchester United have a defensive injury crisis, with Patrice Evra suspended and his replacement Alexander Buttner doubtful after picking up a hamstring injury. Centre halves Rio Ferdinand, Jonny Evans and Chris Smalling have only recently recovered from injury, which is why Michael Carrick lined up as a centre back in the 2-0 victory over West Ham. Juan Mata is ineligible.

As mentioned, Thiago Alcantara is out due to a knee injury – which is a big blow to the visiting side. 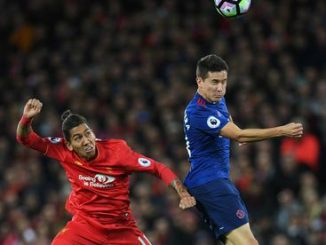 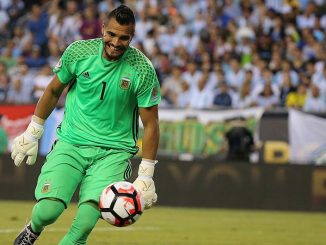