Was it the finest moment for United fans since Sir Alex Ferguson was at the helm? Was it “the philosophy”, instilled by Louis van Gaal beginning to shine through? Or was it indeed the sheer desire and quality of a side brimming with confidence, which was so clearly devoid throughout the David Moyes era. In all fairness, it was probably a bit of all three.

If you rewind twelve months, we’re a week short of the day that Moyes was sacked by the club. United had been hammered and hadn’t even put up a fight against Liverpool and Manchester City, losing both games 3-0 and were out of the running for a Champions League spot by the end of Moyes’ final game against his old club, Everton.

Today, the mood is very different around Old Trafford and Champions League football is looking very likely to return to the club next season. Chelsea are too far ahead to, realistically, be caught at this stage – but Louis van Gaal’s men are really sending out a message for the 2015/16 campaign.

With 4-3-3, it’s much easier to make combinations going forward. I always like to play offensive football and nobody will convince me otherwise. – Johan Cruyff

He and Louis van Gaal might not see eye to eye, but I doubt you will find a player who was equally as brilliant as a player as he was a manager. A difficult character who always speaks his mind, Johan Cruyff (along with Rinus Michels) is generally considered the creator of the blueprint for the modern day Barcelona, who have won the Champions League three times in the past decade – playing a 4-3-3.

The origins of 4-3-3 are debatable but we’ve associated the offensive formation with the Dutch for as long as I can recall. From the Dutch International team to the Ajax side who dominated Europe in the early 1970s – an interchangeable and fluid formation that encourages width.

Louis van Gaal was heavily criticised for playing three at the back as United’s build up play was extremely slow and pedestrian. United’s manager was also then slated for playing a more direct style of football when Marouane Fellaini was brought back into the fold. It was a useful tactic in obtaining a late equaliser against West Ham in early February, with Daley Blind netting the goal. But it has been in recent weeks that United fans have seen some brilliant free flowing football, which coincides with a shift to a 4-3-3 formation.

Referring back to Johan Cruyff, the beauty of his sides was in the versatility of the players to change positions with ease and encourage overlapping fullbacks to enter the space vacated by the travelling winger. The likes of Antonio Valencia and Ashley Young have really benefited from the change in recent weeks and are both playing some of their best football for the club. Both players offer flexibility to interchange up and down the flanks, whilst the not as dynamic Marouane Fellaini offers an outlet for United to get the ball forward quicker. Its all about balance and van Gaal seems to have stumbled upon it.

The side that brushed Manchester City aside yesterday were without summer signings Angel Di Maria and Radamel Falcao, who will certainly remain on the bench for Saturday’s clash against league leaders Chelsea. Its amazing to think that United would look far much more stable, be more creative and challenge top sides. Since the shift to 4-3-3, United have beaten Tottenham Hotspur (lost 2-1 last season), Liverpool (lost 3-0 last season) and now Manchester City (who also beat United 3-0 last season). United haven’t only won the game, they’ve done is handsomely in all three fixtures.

Below are two screenshots highlighting the players influence in the victory on Sunday and in the 3-0 defeat at home last season: 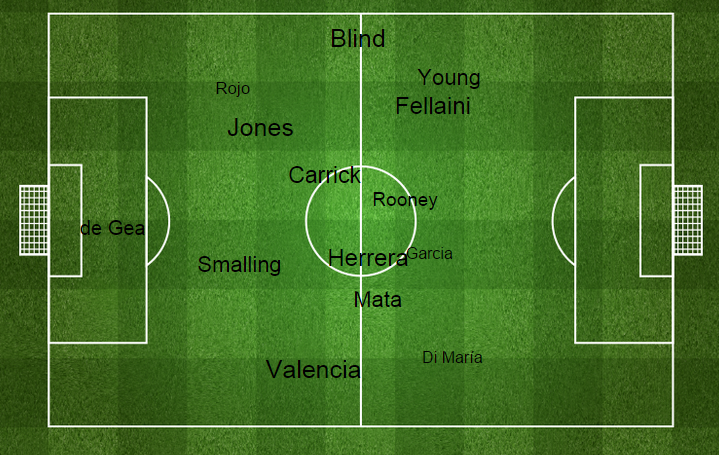 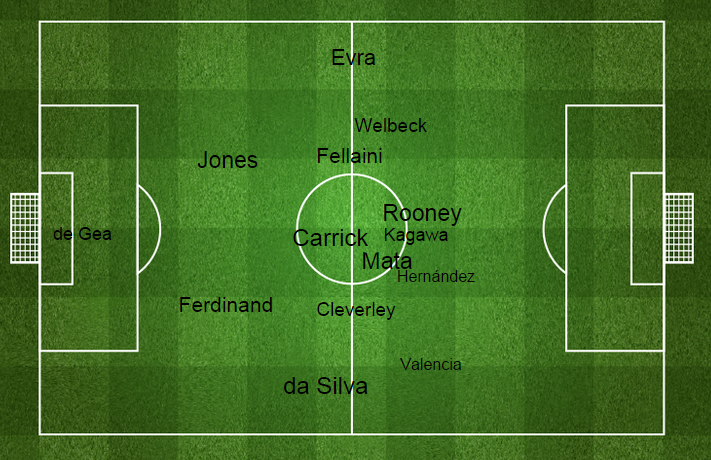 United had a lot more width this time around, especially down the left hand side, a tactic United have utilised in the past month. Michael Carrick (see next point) totally dominated the midfield and sat in as a third centre half when United had the ball, with Valencia and Blind pushing on. The tactic to nullify Pablo Zabaleta down the left hand side is quite clear in how David De Gea distributed the ball: 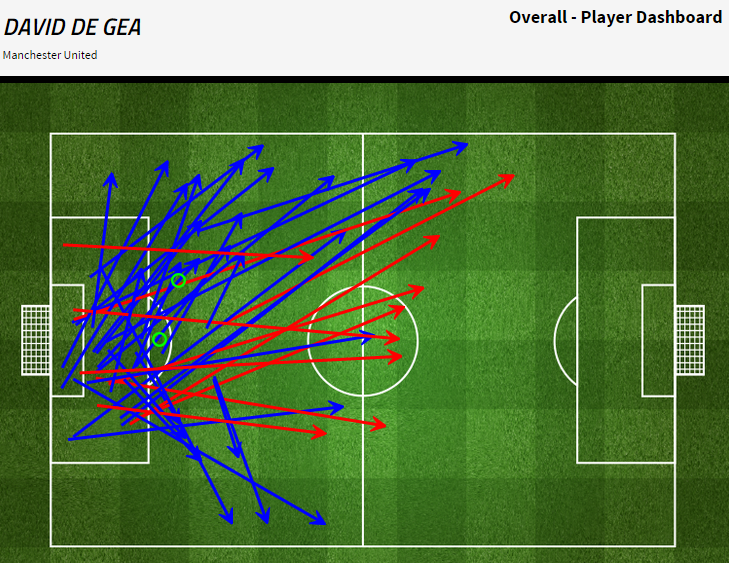 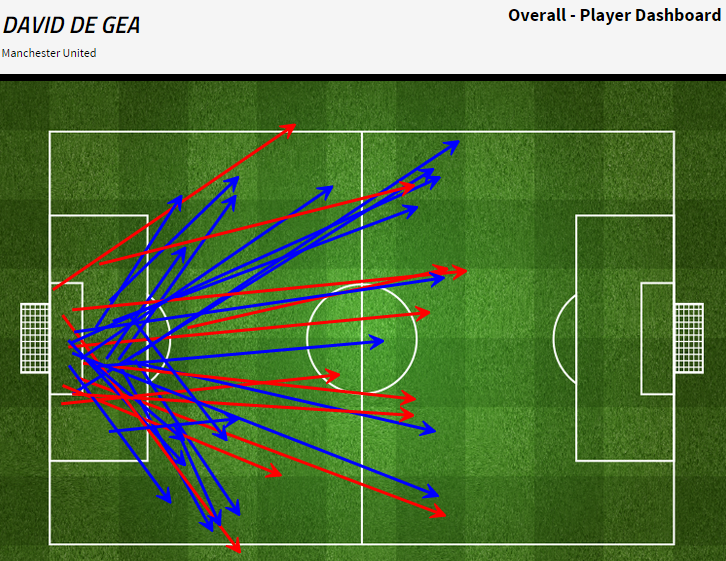 It was obvious to see, for anyone who watched the game, but the above two diagrams highlights the difference in the performance from last season to the one on Sunday, with a clear strategy in place. All screenshots are provided by FourFourTwo’s Statszone.

Some argue that Louis van Gaal has stumbled across a formation that is now making Manchester United tick, however – if you look in the history books – Ajax, Barcelona and Bayern Munich have all played 4-3-3 with van Gaal at the helm. The Dutchman has the ability to change and adapt his team when circumstances change, a quality that is evident in one of his former pupils – Jose Mourinho. It will be the teacher versus the pupil on Saturday evening and United, Michael Carrick injury permitting, will surely line up the same. The league title may be, realistically, out of United’s reach – but it will lay down a marker for the next campaign.

Its nearly a decade now Michael Carrick has strutted his stuff in the centre of the park for Manchester United. He has had his fair share of criticism in his time. “He isn’t Roy Keane”, “He only plays sideways” and “he doesn’t score many goals” are a few of the comments pro-Carrick fans have had to answer in the pubs post and pre match. Yes, he doesn’t get as many goals as Paul Scholes, Roy Keane or Bryan Robson who have gone before him, but his importance to this United side – and the side that lifted the 2008 European Cup – is vital.

The Stretty Rant have always been a big fan of United’s number 16, and those who think there is a world between Michael Carrick and former United captain Roy Keane may want to read this article, and his display against City was absolute top drawer. He dominated the midfield and got on the ball much more than Yaya Toure and Fernandinho and shielded Chris Smalling and Phil Jones as a deepest midfielder. Ander Herrera has the energy and the legs to get about the pitch, whilst Fellaini offers the physicality higher up the pitch.

He was magnificent along with Ashley Young, Juan Mata and Antonio Valencia. Lets hope his injury, which saw Louis van Gaal apologise for making too many substitutions too soon, doesn’t keep him out of the starting lineup against Chelsea on Sunday.

A small word on Manchester City – United have played second fiddle in terms of head to head clashes between the two teams in recent seasons. United fans have had to witness a 6-1 humiliation, a 2-1 loss (with United closing in on the title) and a 3-0 thumping last term. Wayne Rooney’s remarkable bicycle kick decided the fixture the last time United won a home tie against City and the victory on Sunday was well overdue.

For all the quality in City’s side, with Sergio Aguerro netting his 100th goal for the club, they struggled to keep up with Manchester United and were chasing shadows for most of the game following the equaliser by Ashley Young. The reaction to City’s second goal was telling, with no urgency to get the game kick started and take the game to ten man United. The retrieval of the ball from the opponents goal and placement on the centre circle may not speed the game up at all, but it sends out a message that you mean business. Was the acceptance of a consolation goal a reflection of a team that needs an injection of quality or from the lack of inspiration from the manager at the helm? Possibly, a bit of both.

Manuel Pellegrini is surely on his last legs as Manchester City manager, even if the club were to go on an extraordinary run and finish second this term. Elimination, again, in the Champions League and another limp defense of the title will surely send shockwaves from here to Abu Dhabi. Stephen, who blogs at View from a Blue, spoke before the game regarding the fate of Manuel Pellegrini and felt that the Chilean’s time at City is up.

United are on their way through transition following the departure of Sir Alex Ferguson and are on the rise following a disastrous campaign last season. City fans will surely be hoping that serious investment and a change of management in the summer will quash any optimistic Red thoughts that the balance of power may be slightly shifting again.