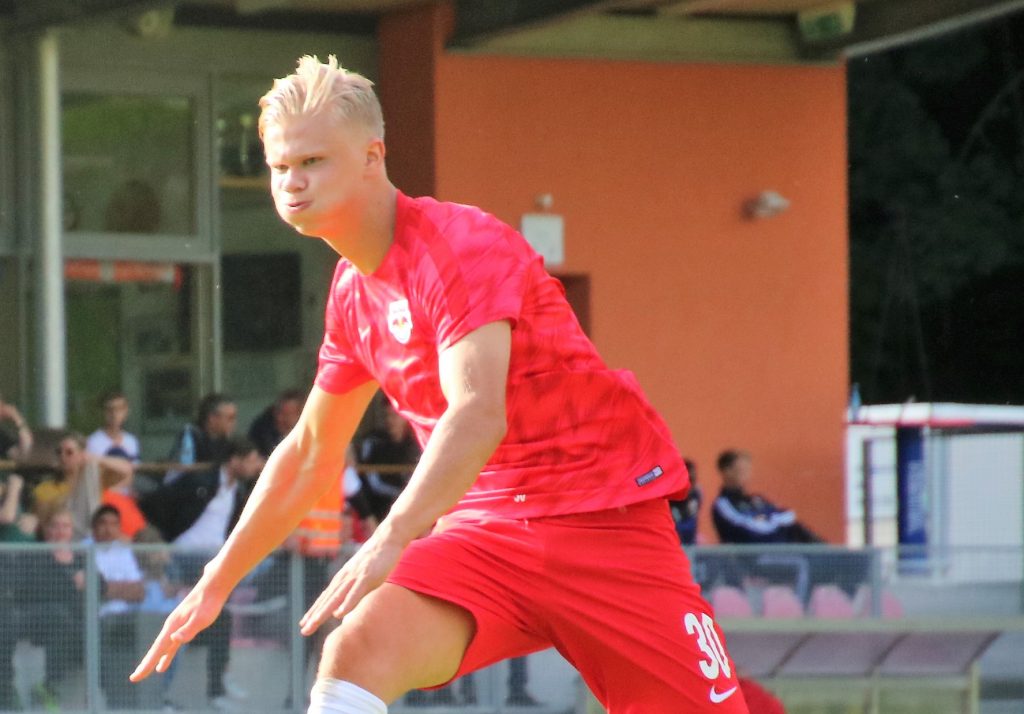 Manchester United are being heavily linked with a move for Erling Braut Haaland, the Red Bull Salzburg striker who is tearing the Champions League this season, but also the Austrian Bundesliga. The Norwegian teenager is quickly becoming one of the young sensations of European football, with his incredible goalscoring record, but also the potential to keep doing so once he moves to a better league.

Here are some key things you should now about the 19-year-old.

Erling is son of Alf Inge Haaland, former Leeds United and Manchester City player. His father played for Leeds when he was born in 2000 and Haaland senior ended up with 181 matches to his name in Premier League. Many have pointed out that fact as a potential reason why Haaland junior would not join Man United, but there is also another one – Roy Keane basically ended Alf Inge’s career with a horrendous tackle. All of that might not matter, but it is worth pointing out.

How Is He Doing So Far?

He scored 26 goals and added six assists this season, which would be a great tally for any striker anywhere in the world for the entirety of the season. But Haaland did all of that in just 18 appearances, as we are just midway November. The Norway international has also scored five hat-tricks in that period, whilst he also shined at the Under-20 FIFA World Cup in Poland last May, when he was the best goalscorer of the tournament. That is not a surprise considering he scored nine goals against Honduras alone, when Norway beat them 12-0.

What Makes Him Stand Out?

The fact that he is fast, strong, tall, creative and technically adept is remarkable. He is 194 centimeters tall, but due to being short until he was in mid-teens, Haaland has great pace and is really good with the ball at his feet. In the meantime he started growing in such an unusual and drastic way, getting body mass up as well to go with the height. With such height and 87 kilograms, he feels like a brutish figure, a ‘manchild’, as he was nicknamed at his former club Molde. And truly, his physique does not give you the impression that he is still a teenager.

So far this season, his goals were a mixture of good movements and getting into the right positions, precise finishing that does not require a lot of shot power. He is instead looking to aim for the angles of the goal, relying more on intelligence rather than raw power.

He Played Under Solskjaer

That was in early 2017 when Haaland left his local club Bryne and joined Molde. There, he started building up body mass and Ole Gunnar Solskjaer, his manager at the time, even said at one point that he must have put up around 11 or 12 kilograms in about six months.

For his character people say he is a good humoured bloke who likes having fun, but that he is also very focused on his career, managed by both Mino Raiola and his father Alf Inge. Also, there is the fact that he changed his last name from Håland to Haaland, to make it more international.

Can Man United actually sign him? It is a big question, but they should seriously consider him.