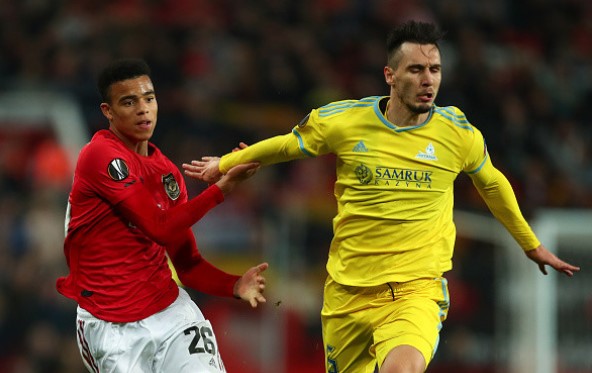 Manchester United have lost their first match in Europa League since 3 November 2016 when it was Fenerbahce who defeated the Red Devils, but this time it was Astana who did it Kazakhstan, with a second-half comeback to beat Ole Gunnar Solskjaer’s side 2-1.

Man United got the lead after 10 minutes when Jesse Lingard’s lovely strike put them ahead, but then in the second half there was a span of just seven minutes when United conceded twice to get behind and never recover from it.

Here are the thoughts from after the match.

It was a long wait for Jesse Lingard. A very long wait indeed. He ended his 28-matches long streak without a goal scored, since his last came in January 2019, in the FA Cup victory over Arsenal. It was a good time to score, simply because he got the opportunity to captain Manchester United.

He spoke before the match that was a huge honour for him and it was nice to see him put one in the net from distance so early into the match.

Tahith Chong is stalling signing a new contract with Manchester United, but after tonight’s game, not many will feel United could miss a lot if he was to depart when his current deal expires. It was another match in which Chong got the opportunity to show what he can do, but throughout the match he never really did any of that.

He was talked about in recent times with excitement, but he was unable to influence the game at all. He was ineffectual and also missed a sitter that he should have buried, before Astana equalized less than a minute later.

This season there were plenty of opportunities for him to show the attitude and the potential  to play at Man United, which was the case with Mason Greenwood. But not from Chong.

Nenad Eric had a really good game against Manchester United once again. He did almost perfectly at Old Trafford and this time he also conceded once. But it was his brilliant saves that kept Astana on the path to victory once his teammates scored twice in quick succession.

Those two saves were really good and with another couple of saves in the first half, he was one of the best performers for the home team.

First Place Up In The Air

And once the match ended, it meant that the first place could remain up for grabs and that even AZ Alkmaar could sit on the top of group L after their match against Partizan. But in the end they drew 2-2 after losing 2-0 with ten men with five minutes to go.

That draw means that Man United and AZ Alkmaar are the two sides to qualify from the group, but the game between them on the last matchday will decide who will take the top spot. It remains to be seen how important that will be for Solskjaer and what kind of side will play against the Dutch team.