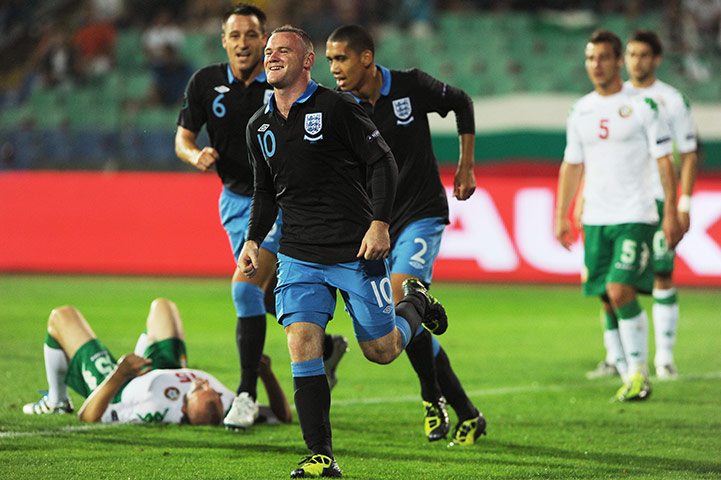 United > England. It’s what I’ve always believed and what I’ve always been told. Perhaps though, my interpretation of that belief needs amending somewhat now though. I am English and despite my lack of passion towards the national team, I can see myself having something of an affair, cheating almost on my beloved Man United. The freshness brought into the club this year by youth seems to be transferring itself onto the national team and for the first time in 15 years, I’m almost excited to watch my country play. Almost.

My England-supporting history is mixed. I was nearly 8 when Euro ’96 took place on my doorstep and with England playing every game at Wembley, just minutes from where I lived back then I went to every game of theirs. I loved it. Everyone was united behind the players and the 4-1 win over Holland was one of the best games I’ve ever been to. It didn’t matter which club you supported because the team were playing so well. It’s only once a player makes a mistake that the club they play for tends to come into play.

The second league game of the 1998/99 season took United to Upton Park to face West Ham. Only then did I realise the extent to which United players were hated because of their performances with the national side. Burning effigies of Beckham on the gates of the ground remain a symbol for United hatred that sticks with me. From then on I subconsciously vowed to make sure that all my footballing passion went on United and wasn’t wasted on England.

Gary Neville’s autobiography has just been published and in it he recalls the abuse he’d get from ‘fans’ at England games – people he was convinced were simply turning up to abuse the players they didn’t like rather than support the national team. Chants such as “stand up if you hate Man U” were clearly heard during games and United players were regularly booed. If it wasn’t Beckham it would be one of the Nevilles or Butt or Scholes getting the treatment. In truth, England fans never realised just how lucky they were to have such wonderful players available.

So as time went on and I grew up I convinced myself I hated my country’s football team. Despite the fact United had regular representation in squads, I was never too bothered if the team would win or lose and I was never surprised that the ‘Golden Generation’ failed to live up to the lofty expectations imposed by the media. In truth, England grew too soft and cushty as Del Boy might have said – players would be picked based on reputation rather than form or who’d actually work best in the chosen system.

If you follow me on Twitter you’ll know that youth football is something I follow closely – not just United’s youth but the progression of young players at other clubs, youth football in other countries and at a national level. It’s through this that I’ve started to once again take some kind of interest in England again. As the talented Man United FA Youth Cup winning side of 2010/11 have progressed, they’ve been rightfully capped at various international levels. Playing for your country should always feel like an honour and despite the fact I’d rather win a Champions League with United than a World Cup with England, for most players, playing for their country represents the ultimate accolade in football. The enthusiasm the young United players have for representing their country is endearing and it’s nice to see so many of them being appreciated by fans of other clubs.

Take the FA Youth Cup winning team for example. From that group of players, Sam Johnstone, Tom Thorpe, Tyler Blackett, Larnell Cole, Ryan Tunnicliffe, Zeki Fryers, Ravel Morrison, John Cofie, Jesse Lingard and William Keane have all been capped by England at youth level with most of them featuring regularly right now. With their regular involvement and their regular top performances, it’s hard to not be drawn in by their achievements whilst playing for their country and in theory representing me and many other United fans at the same time.

It’s difficult not to feel a sense of pride when Cleverley, Welbeck, Jones and Smalling are being talked about as England players and potential starters. Add in Young, Carrick, Rooney and Ferdinand and that’s suddenly 32% of an England squad. A fresh era is starting for the national team after recent disappointments. For me, it may well be a fresh era too for following my country again. I don’t necessarily expect to see them win anything but these are players who England fans can hold little against bar the fact they play for Man United. After all, Rooney is their talisman and the current England team would be nothing without him.

United>England. My passion lies with United. I think I’ll always feel more for my club than I do my country but that doesn’t mean I can’t want my country to do well either. I can’t make other England fans like United players but given how many wanted to see Cleverley or Smalling start the latest batch of games it seems their attitude may well be changing too. Maybe I’m not an England fan as such, I support the United players within the England team but that in turn means I want the England team to do well.

Plenty of United fans will turn their back on England forever and I can understand that. The FA are a joke and whilst they continue to have one rule for United and one for everyone else many United fans will continue to stay away from admitting any affiliation to the national team – it’s not the cool thing to do. I however may just watch England on Tuesday when they take on Wales. The new breed of United youngsters may just be able to swing my feelings and given that there may well be more to follow in the next few years making the transition up to the full national side, now could be a good time to reconsider my stance.

I won’t suddenly attend every game or buy an England shirt but wanting United players to be successful in an England team is a good place to start. Whether like Danny Welbeck they’re from Manchester or like Chris Smalling they’re from central London, they’re representing Man United and they’re doing the club proud.