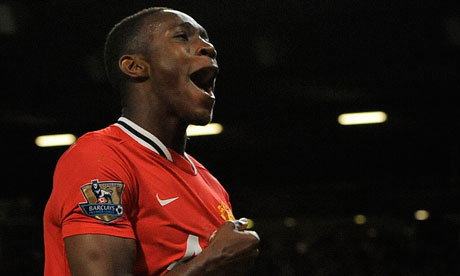 The Dark Passenger, my nemesis, the thing that can change me as a person in the blink of an eye. The part of me deep inside that I’m constantly in battle with, the classic comic book enemy that never wins but always gets away at the end.

This is how I see my almost daily battle with what is described as anxiety and depression, it’s a battle that loses me sleep, energy and the ability to do the huge majority of the things I enjoy.

One thing that doesn’t give in to the Dark Passenger however is my love of football be it watching United, refereeing games at the weekend or having debates whether in person or on Twitter. The effect of football on my ability to get through the hard and dark days is like an airstrike on Call of Duty (Video Games are another way of coping), it destroys the majority of the bad thoughts but you always miss one or two in the bushes.

This is how the beauty, simplicity and belonging of football helps me deal with other aspects of my life and keeps me smiling on the hard days.

To give you a little background to Bricki the ‘person’ I’ve been married now just over 2 years although i have been with my wife since meeting in college. I work in HR for a major bank and we have our own little house which we’ve been in for 4/5 years.

So far all very normal and clearly no hint of any underlying issues about my mindset or personal issues. I have been a season ticket holder at United since 1996 but my first visit to watch them was in September 1992 as a 9 year old to see a goalless draw against QPR. I remember being in the scoreboard end, too small to actually see the pitch properly but able to turn round and tell my dad that the scoreboard said it was still 0-0.

I grew up in a very football dominated family, my parents both went to watch United in 70s/80s, and several of my uncles were also regulars on the terraces. Football quickly became a major part of my life; I was playing for junior teams and watching whatever matches I could. As I’ve gotten older my skills as a player rarely paid the bills so football became about watching and learning. I became a coach and got involved in coaching youth players. It was in my early 20s where I started to experience the feelings that would become my depressive and anxious times. A health scare coupled with other events in my life combined to leave me in a very low and dark place. The only release I found from this period was either with my future wife or through football.

Growing up in school I had my good friends however I was at times a bit of a floater and mingled between sets of kids without ever really belonging to one specific group. The only thing that was a constant in school for me was playing football, if there was a game I would be involved in someway. Once I joined secondary school I was more often than not a substitute for the school team. The disappointment of being of the touchline was tempered by the fact I could watch the game and understand the phases of play and how the teams were approaching the game. At the same time I and several of my friends were becoming seriously into Championship Manager. The managing and creating a team appealed to me greatly so being able to watch and assess a game became more enjoyable to me than playing.

I took the FA Coaching badges and was asked to help a local junior club out who were short of coaches. Invited to watch a team’s friendly fixture the coach looking after them decided to referee the game and asked me to coach the team from the touchline. At this point I was still lacking in confidence and would normally have run a mile but given no option I had to coach. Unable to let the kids down I soon became their coach, these 11-12 year old kids now depended on me to impart my footballing ‘knowledge’ on them and make them potential superstars. It soon became clear that these kids were more ‘Renford Rejects’ than future world beaters. Coaching quickly became about improving the players’ abilities rather than creating a winning team. It was around this time I started to have my dark times as well, I was in a job I really wasn’t enjoying, I had started to become very de-motivated in everything else I was doing and became conscious of myself and my appearance to others. I would get a thought in my mind and it would spin round like a tornado getting bigger and more destructive with each turn.

Using the ability to coach kids in something I loved was one of my main ways of attempting to control how I felt and taking my mind off these ‘tornado’ thoughts. One of the major things that affect me is an inability to be able to control these thought processes. Controlling my thoughts wasn’t possible at this point so I had to put something else in my mind to replace these negative thoughts. If I could replace the thoughts then it was easier to handle rather than attempting to confront the negative thoughts and deal with them.

When I proposed to my now Wife while we were on holiday (on a seafront on her birthday, I can be a little romantic) the plans started to be made for the wedding. Anybody that has coached a youth team will understand it’s not just about turning up to training midweek and a game on a weekend but it takes over your life. You have club and league meetings to attend to and planning all the games/training. You may as well treat it as a second full time job.

The players on my team were not just a bunch of kids that I saw a couple of times a week but they became my children. Every goal and every tackle they made or conceded I felt just as much on the touchline, I lived every game they played much the same way an Alex Ferguson or a David Moyes must feel every touch in a Premier League match.

My Wife works in retail so 9/10 Saturdays will be working meaning the only day we had together to plan anything wedding related was the Sunday. As my team was now playing Sunday afternoons I had to make the decision to step down as a coach at the season end in order to put the wedding first. This was a tough decision to make and upset me greatly having to say goodbye to the kids at the season end.

Losing this outlet where I could step into another World and become somebody I struggled to be in my everyday life left a big gap in my coping strategy. Whilst I was coaching the youth team I usually decided to miss United games and concentrate on my team. With my coaching now gone I became a regular at Old Trafford once again, going to games with my dad, uncle and brother or sister.

I hate to be alone, on Saturdays when my Wife is working I would go and spend time at my parents or uncles just to help make sure I wasn’t alone and likely to start thinking negative thoughts. When the football season restarted in August it gave me something to try get really involved with. Going to the matches with my dad and brother or sister made me feel safe, walking to the ground and seeing all the fans making the same journey gave me a sense of belonging. It was like my extended family which when I stepped into the ground embraced me in a blanket of noise, support and togetherness. Watching the players warm up, the fans cheer and then the music as the teams came out at the start. When the trumpets kick in for the Rocky theme as the players emerge from the tunnel I get chills down my spine. The sense of belonging, not knowing much about the people around you except for the reason they are there fills the soul with good feeling. I am not being judged there, I can stand up and sing, sit down and be quiet or just stand arms folded and take in the atmosphere. The moments of excitement where you involuntarily clutch the arm of the person next to you, breaking into song and not caring how you may sound and the mass hysteria and relief the moment a goal is scored cannot be repeated in any other place in any other way.

In the last month or so I have had a period where my Dark Passenger has tried and tried to beat me, his constant efforts have worn me down and left me unable to leave the house some days. When I went to the two Premier League games against Spurs and Arsenal the feeling I got as I entered the ground helped me to stand up and face him. I was able to tell him that he will not take this moment away from me, this is my house and he is not welcome. As the team played with a vigour and swagger I’d not seen since the swashbuckling team of a few years previously I felt an energy surround me, seeing the youth players take their chance and impress, players such as Anderson and Ashley Young show that they can belong on that stage and allow me to dream of what could be in the months ahead is something no person or condition can take away from me.

Seeing a simple run down the wing from Nani, tackle from Vidic or long range effort from Rooney can stoke a feeling inside that makes me feel I can take on anything.

The beauty of football is that the result cannot be predicted accurately, Leeds against United in the FA Cup 2 years ago, Leyton Orient holding Arsenal and even Blackpool earning promotion are events you would not be able to accurately predict but they happened.

I am very lucky to support a team that has had unforeseen success for the vast majority of time I have watched them but it is not this that makes me love football. It is the fans together, the emotions it makes happen and the family feeling that you don’t always get in other sports.

As long as I have my football and my Manchester United I always feel I have a chance of experiencing what is yet to happen in the world and that to me is maybe the greatest feeling in the world.

Thank you for taking the time to read this and I hope you may have gained a little something from it.

6 Comments on Football – The Light On My Dark Passenger