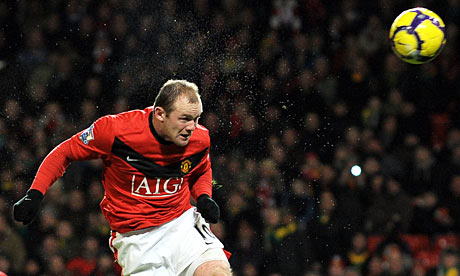 Wayne Rooney has picked up yet another award to add to his PFA Players player of the year award he won last week. Rooney has scored 34 goals so far this season, although is now sidelined with a groin injury. United’s number ten won the award with 81% of the vote beating Chelsea’s Didier Drogba and Manchester City’s Carlos Tevez to the vote.

Rooney, who is obviously delighted in picking up both awards, released the following statement:

“I am delighted to win an award with so much history and tradition and to follow a long line of wonderful players who have been honoured by the Football Writers’ Association since 1948 gives me real pride. I would like to take this opportunity to thank my manager at United, Sir Alex Ferguson, the coaching staff and my team-mates, without whose help and support this award would not have been possible. Also a big thanks to my family and friends for their constant support which is always appreciated. “I thank the Football Writers’ Association members who voted for me and I look forward to personally collecting my award at the Footballer of the Year dinner in London on 13 May.”

The FWA has been running since 1947/48, when Stanley Matthews – then at Blackpool – won the award. Since then a whole host of United players have won the accolade, including Johnny Carey, Bobby Charlton, George Best, Eric Cantona, Roy Keane, Teddy Sheringham and Cristiano Ronaldo. Wayne Rooney also becomes one of the select few to pick up both the PFA Player of the year and FWA awards in the same season. Cristiano Ronaldo did it on two occasions – whilst the first United player to do so was Roy Keane in 1999/2000.