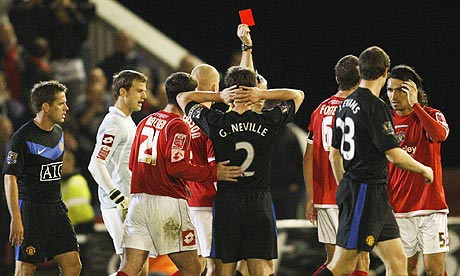 Danny Welbeck and Michael Owen scored goals early in each half to secure progression from a comfortable 4th round Carling Cup tie at Oakwell against Barnsley, though the final 10 minutes raised an important question about player safety.

Though the first half was somewhat comfortable for the holders they did get a little complacent and/or disjointed to invite their lower league hosts back into the game.

Gabriel Obertan’s first involvement in a first team Manchester United shirt was a clever interchange with Rafael which won a corner. Anderson’s delivery of the set piece begged a goal and Danny Welbeck duly obliged, heading in smartly and unchallenged after 5 minutes. The Anderson and Welbeck combination almost reaped dividends in the 9th minute when the Brazilian’s stunning 40 yard pass was controlled expertly by his English team mate but the shot was smartly saved by the Barnsley keeper Luke Steele.

Ex-United trainee Steele was at it again soon after, denying Obertan, before Barnsley had their own spirited spell with three chances from corners – first Bogdanovic hit the post, then Tykes’ skipper Steve Foster failed to test his namesake in the United goal.

For the visitors’ part, they looked impressive in short spells, particularly through Welbeck, though at times it seemed as if he was getting a little head rush with his own display and wanting to take everything on his own. Welbeck it was though who created a gilt edged chance for Owen (who wasted it) in the opening minutes of the second half, and then substitute Tosic curled a screamer narrowly over – shortly after though, United did double their advantage and Anderson was provider again as Owen rectified his miss with super feet and a sublime finish past Steele.

Gary Neville was probably rightly sent off after leaving his foot in high despite winning the challenge against ex-Liverpool youth teamer Hammill – however the chubby young winger wasn’t happy with just this decision (even taking into consideration his indecision over whether to feign injury or start a confrontation) and the game began to take a sinister turn as it became clear Barnsley’s chances were evaporating. Whereas Neville’s tackle was clearly one made out of honesty with a bad follow through, Hammill made a reckless challenge on the impressive Rafael with no other intention but to harm his opponent but escaped any caution.

Conditions took a bizarre twist when two Barnsley fans invaded the pitch and confronted Ben Foster and took a complete age to be accosted by stewards, raising questions about the security of the club who were seemingly willing to accept an entirely possible personal attack on a visiting player but seemed ridiculously over zealous in their policing of the visiting crowd who had done nothing but enjoyed the game in good voice.

Progression to the quarter finals for the holders was the main thing but nonetheless the poorly controlled climax to the game should serve as a security concern nationwide.