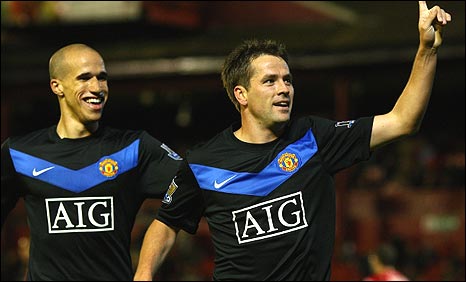 Gabriel Orbertan is unlikely to start for United against Blackburn Rovers tomorrow as Sir Alex Ferguson thinks that it is still ‘too early’ for the young French winger after his impressive debut display against Barnsley in the 2-0 victory last Tuesday. Orbertan used his pace a number of times down the right hand side and showed some promising signs that he could be a valuable asset as the season progresses.

Sir Alex Ferguson was speaking at a press conference today – where he also attacked the media claiming many journalists set out to ‘humiliate people’. United face a Blackburn Rovers team who are fresh off a 5-0 hammering by Chelsea last weekend. The United boss also discussed the potential return of midfielder Darren Fletcher – who has impressed many with his energetic performances this season.

Fergie spoke of Orbertan’s run out in the reserves and the injuries that he has sustained since signing in June:

“It was Gabriel’s first real game on Tuesday. He’s had a few runouts for the Reserves but I think it’s too early for him to start tomorrow. It depends on injuries – he may get on the bench. He’s settled in well and he definitely has ability – he has marvellous pace, which is always important in football today. He’s overcome his injury, which is the most important thing. He didn’t know about his injury when he signed him and we’ve picked it up. Hopefully we’ve corrected it.”

United beat Blackburn Rovers 2-1 at Old Trafford last season with goals from Wayne Rooney and Cristiano Ronaldo. It is key that United bounce back after the disappointing 2-0 defeat to Liverpool last weekend.