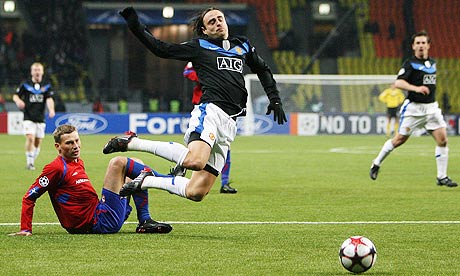 Antonio Valencia scored his second Manchester United goal in his second consecutive game to give Sir Alex Ferguson’s men a thoroughly deserved win in Moscow against CSKA and ensure the club equalled a European Cup away record of unbeaten games at the scene of their most recent successful campaign in the competition.

It could hardly be said United dominated the opening half even if they did have the better of it – they seemed to really adapt to the plastic pitch with some exhibition style passing, fully utilising the foraging attacking talents of the Brazilian Fabio down the left.

As pleasing on the eye as the passing was, it was hardly penetrative and it was in that final ball that both sides were lacking. The first opportunity of note was an Anderson free kick that was easily saved on the midway point of the first half, before Paul Scholes tested Akinfeev’s ability to deal with a bouncing ball a minute later – a test the rumoured United target passed.

It was Gary Neville, strangely enough, who came closest to breaking the deadlock with a left foot 20 yarder that grazed the top of the netting. Had Berbatov’s first touch been to its usual standard he too may have given United a half time lead, but at the interval the game remained goalless.

Ferguson had clearly been encouraged enough by his side’s performance to tell them to go for the win and in the second half his words seemed to clearly gee up the players – after a precautionary 10 minutes of anticipating the “sting” of a pumped up CSKA after the break the visitors began to impose themselves on the game in a way that their hosts just couldn’t cope with.

Dimitar Berbatov thought he had won a penalty – there was clearly contact from the CSKA defender but the Bulgarian’s theatrical response earned him a yellow card for, apparently, simulation. The booking was clearly the right decision but to deny the penalty? Luckily it mattered not but for a while it seemed that United’s enterprising play might not be rewarded. First, Nani’s diving header from Neville’s cross was superbly stopped by Akinfeev and then Valencia played three one two’s with team mates, sending a 20 yard striker crashing against the crossbar.

The Red Devils made changes, with Wes Brown on for Ferdinand as a precaution, then Owen on for Scholes as Fergie looked to change the shape of the side, and finally Fabio had to be stretchered off to be replaced by Carrick – but not before having a vital contribution. His all-round performance was simply brilliant and his last ditch tackle began a move that resulted in Nani’s left wing cross being headed on by Berbatov to Valencia, who squeezed in a well taken shot across goal to give United their richly deserved goal 5 minutes from time.

United then almost went on to score again with Anderson’s shot deflected wide when it seemed in all the way and then Carrick having a 20 yard chance that was taken by the keeper.

A comfortable evening’s work which would have been satisfiable with a draw and no injuries ended with a win and encouraging individual performances from the likes of Nani, Valencia and Anderson who are all beginning to grow in stature, and aside from Fabio’s late cramp (which was more down to his non-stop performance rather than the pitch), no scares on the health front. It could not have gone any better for Sir Alex who can now focus his attentions fully on a certain Premier League clash up the M62 on Sunday.