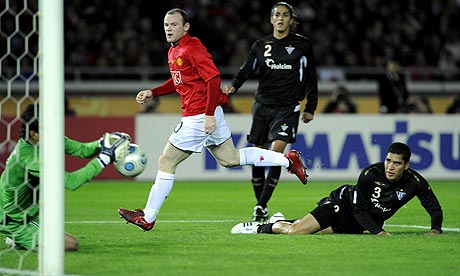 It’s summer, the summer football international tournaments finished a couple of weeks ago, but transfer blogs can get tedious as they speculate between the unknown and the ridiculous, and those reasons have inspired me to write a blog about a subject that has probably been dead in the water for around 5 months (well it was that or the fixture list!).

And in bragging terms at least for the next few months any claim to be “the best team in the world” will seem a little hollow considering we lost the Champions League final and as such will be dethroned officially in December.

I’m not under any illusion about the World Club Championship (formerly Intercontinental Cup) – the competition is seemingly a long way from having the glamour or even aura of being the “Premier” club competition, even though by definition that clearly is what it is.

Doubters have two (admittedly somewhat convincing) arguments in that primarily it was a one-off (initially, double legged) tie between the champions of the two perceived strongest continents – and a one off final wasn’t enough to convince certainly the British footballing community that the victors should be deemed world champions.

The second argument is that even in its re-formatting the competition has now come into stick – more continents are now represented in what can be described as a seeded knock out tournament, with the criticsm inevitably being that those sides from the supposed “weaker” continents are not of a quality worthy enough to describe the Champions as truly “the best in the world”.

Firstly, I think this is unfair, and secondly, whenever this is brought up in conversation I reference the beginnings of both the World Cup and the European Cup itself. Indeed, even the English league has a respective comparable existance.

Perhaps somewhat predictably I believe that United’s haul of 3 European Cups/Champions League is favourable and at the very least an equivalent to Liverpool’s 5 European Cups.

The first European Cup had 16 teams – including a Polish team that hadn’t even won their domestic championship.

As impressive as Real Madrid’s amazing 10 time record sounds, they won it 5 times in a row playing a maximum of 4 ties including the final each time, and among their opponents were the likes of Jeunesse of Luxembourg and the comically named but perfect illustration of the point I’m making, “Weiner Sportclub” of Austria.
It’s a fair issue to lament but with the run from 1956-1960 coinciding with the Munich disaster, we may well have made our own indentation on their unparalled period of success.

As it is essentially Liverpool fans arguing the toss with United fans over this issue due to our respective positions in English football then it’s only fair to highlight their involvement. In the 1977 competition, Liverpool’s first successful campaign, there were 32 teams in a knockout format. Among the elite were “Stal Mielec”, the Polish champions who now ply their trade in the fourth division, Dundalk and Crusaders from across the Irish Sea, as well as representatives from Hungary, Luxembourg, Greece, Cyprus, Iceland, Norway and Malta.

Liverpool’s route to the final reads : Crusaders, Trabzonspor, St Etienne, and Zurich before defeating Monchengladbach in the final.

They successfully defended the trophy after receiving a bye in the first round, defeating Dynamo Dresden, Benfica, Monchengladbach again and Brugge in the final. During their third victorious campaign they played an “all sports club” from Finland (meeting them again the next season).

There’s an age old debate about whether competitions were easier or harder to win – though I would have to be very drunk or the person I was debating with would have to be Scarlett Johansson, offering me the ultimatum of agreeing before allowing me to spend an evening in her company, before I believed that beating what translates in English as “Hotdog football club” or a Finnish Working Man’s Club is of a level of substantial improvement to beating, say, Palmeiras, as we did in 1999.

Or, that playing three knockout games against the likes of said opponents is of equivalent standard to, say, having to overcome a “group of death” against the German and Spanish champions before even reaching the knock out stages where your opponents would consist of the best two Italian teams and then the German champions again, again as we did in 99.

But, at the same time, I’m of the opinion that the competition is what the competition is – all things evolve as the formats of the competitions change – but, essentially, what never changes is the route of qualification to the summit. That has somewhat altered now that you don’t have to win your domestic championship to win or even enter the Champions League (something I wish would change, but understand due to money this is just the romantic unrealistic pining for a pure unmistakeable competition of the elite), but nonetheless, each time we have won the trophy that earned us the right to be called “World Champions”, we won the league and then the European Cup in the same year.

I’ve heard some people say the Super Cup is a more “important” trophy than the World Club Cup, and, I suppose, a fair argument that by my rationale the Confederations Cup should be considered the superior competition to the World Cup but in fairness, the Super Cup was set up as a showpiece occasion by UEFA and is generally treated as a glorified friendly and is not the most competitive of games, and the Confederations Cup was optional to enter rather than deemed automatically qualified to by a previous success – more recently FIFA decided to hold it in the year preceding a World Cup to give the host nation somewhat of a “dummy run”, rendering it more as a competition of convenience to detract from its significance.
In banter, of course, it will always exist that United fans will mock the fact that Liverpool won the European Cup by playing the likes of, for example, that Finnish working mans club, but we don’t detract from their five wins and of course hope one day we will surpass that. We don’t knock them off and say they won it only once.

The difference is part perception but also part because they haven’t yet won the World Club Cup – on the continent it is a highly regarded trophy and it is anticipated in the regard that befits its creation in South America, as the event it was intended to be.

It goes without saying that I don’t ever want Liverpool to win it anyway, but until they do, or another English club does, it will always be perceived by the media and rival fans as somewhat of a derisory achievement.

But it is precisely this knuckle-headed approach that crosses the line from banter to bitter ranting (branter??), the lack of a fundamental understanding or rational thinking that can’t comprehend that the same argument that they use to detract from the competition can also be applicable to either the World Cup until at least the mid 70s, the European Cup since 92 (or 97, when they allowed non-Champions to participate), or the Football League until after the war. And they have the cheek to say that United fans act like football was invented in 1992!

Until such a time that reality and reason begins to dawn, I shall continue to treat the competition in the esteem that the qualification to it demands – and acknowledge the winners as the best in the world. And that will happen with the full knowledge that it won’t be Manchester United this year.

Otherwise, if we start drawing ambiguous lines in the hypothetical sand, we need to know just how the same standards devalue the records of the other competitions.