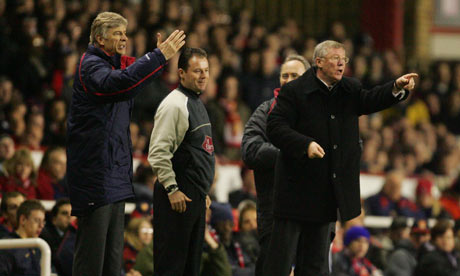 United and Arsenal have had some fantastic contests throughout the years – with United putting in an exhilarating performance against Arsenal in the 3-1 victory in May. However, Sir Alex Ferguson believes that Arsenal have got the ‘biggest test’ in 2009/10 due to the fact that the club is apparently ‘strapped for cash’. Fergie’s comments come after striker Emmanuel Adebayor left the club for Manchester City this week.

United beat Arsenal twice in the Champions league last season, 1-0 at Old Trafford and 3-1 at the Emirates but lost 2-1 in the league (at Arsenal) and drew 0-0 (at Old Trafford) – which clinched the clubs 18th league title. Sir Alex Ferguson had defended Wenger in the season – however his latest comments may not go down too well over in North London.

“Arsenal have got the biggest test to be where they want to be. I know that Arsene doesn’t have any money. I think that selling Adebayor … well, whether he can use that money is another question. There seems to be evidence that he can’t use the money, I don’t know. I think they’re struggling cash-wise. It’s a big test for Arsenal. I think Arsenal is his (Wenger’s) club. He built it in his image and it’s hard to leave it. He could have gone to Real Madrid, but is Real Madrid his kind of club? The way he thinks about football? I don’t think so.”

19 Comments on Ferguson believes Arsenal have it all to do