At home I am a nice guy: but I don’t want the world to know. Humble people, I’ve found, don’t get very far.

I am the greatest, I said that even before I knew I was.

Both quotes were actually said by legendary boxer Muhammad Ali – however i’m sure you could relate both to Cristiano Ronaldo, the best player of 2008. To be a European Champion and to play a pivotal part in your club’s fortunes requires a tremendous amount of self belief, desire and arrogance – something that Cristiano Ronaldo has in abundance. However I believe Ronaldo is the type of character that also wants to be praised for his immense talent and what better way of doing so than winning the greatest individual award a player can get – the Ballon D’or.

‘Fucking hell Ricky the Vengaboys are so 2001.’

That time of the year has come around again when 96 football writers from around the globe – used to just be Europe – will vote for their top three footballers of 2008 that took the European game by storm. Surely there can only be one winner you think? Based upon the way in which Kaka won the award in 2007 – Milan scraping a 4th place finish whilst resting a number a number of players to win the Champions League – Ronaldo is in the lead position and cruising.
Kaka scored three times against United in the two semi-finals and along with Clarence Seedorf was best player on the park. Ronaldo was a lost figure that had little influence on both ties and it was down to Wayne Rooney and Paul Scholes to influence proceedings and get a 3-2 win at Old Trafford. The 3-0 defeat in Italy was devastating due to the manner in which we lost and again Ronaldo didn’t get a kick. Were these the two games that gave the award to the Brazilian – who had been sublime in the Champions League that season.

Fast forward twelve months and Ronaldo got even better; scored 42 goals and added the Champions League to his CV combined with retaining the Premier League trophy. How on earth can anyone else win the award? Messi’s name has been thrown forward – who is an amazing player, as he demonstrated at Old Trafford, but can his 2007/08 season be compared to Ronaldo’s?

Messi played 33 games last season scoring 16 goals winning as much as Kaka won last season – nothing. Thats a 0.48 scoring ratio – not bad for a player who suffered from injuries and is, although given license to roam, generally occupies a wide right starting berth in a 4-3-3 Cruyff inspired formation. Now compare his goal scoring exploits to Cristiano Ronaldo, who again occupies a wide position. Ronaldo’s goal scoring ratio for 2007/08 is 0.87 for all 48 appearances. Thats phenomenal. To do that against side’s like Chelsea, Arsenal, Liverpool, Roma, Lyon – the list can go on. Imagine that was Romario in the early 90’s with Barcelona or Andriy Shevchenko with Milan at the turn of the century? If they had of led of led their club to an historical double scoring 42 goals in the process – wouldn’t they surely have been rewarded with the Ballon D’or? Hands down they would.

So to past Ballon D’or winners. The first winner of the award was Stanley Matthews way back in 1956 followed by Alfredo Di Stefano in 1957, with England and Wolves skipper Billy Wright coming in second. As the years went by a number of English clubs had players that won the award with our very own Denis Law picking the award up in 1964, Bobby Charlton in 1966 and Georgie Best in 1968.

Between George Best’s win in 1968 and a quite surprise award of Michael Owen in 2001 – no other English based player won the award. Keegan did with Hamburg in the late 70’s and we had some notable 2nd and 3rd spots (Best in 71 came third, Eric in 93 came third and Beckham in 99 came second). Do the players playing for English clubs get overlooked due to the fact that we tend to play football at a much faster pace compared to the rest of the cultured world? 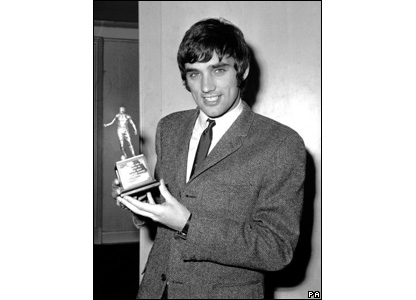 So to Ronaldo – for one lets not beat around the bush, the guy was an absolute tosser over the summer. Like an innocent looking choir boy when everyone is looking at him but pulling his sister’s hair out when the backs are turned – yes Cristiano Ronaldo needed to be a little more humble and appreciate what he had achieved in the five years since that amazing debut against Bolton.

However, there can be no overlooking what he has achieved in 2006, 2007 and 2008. He has grown into a wonderful footballer that is comfortable on his left and his right – not just for shooting but in terms of dribbling ability. He is tall and strong and good in the air – and is a superb set piece taker. Other than tackling, what does the boy not have?

With regards to the initial quotes I do believe Ronaldo needs to have his ego fed. We all do to some degree, but in order to be that good and the style of play that he encompasses – you need to have that self belief and know that you are good – something that we here in England would label a ‘flash tosser’ – or something to that extent. However – these are players that we look at with envy and maybe wish that we could be a little more like that.

I’m not talking about in terms of conduct off the pitch as arrogant players such as Maradona, Romario and Cruyff could come across in a bad light due to the fact that they believed that the sun shined out of their arse. To an extent, who can blame them? In their respected era’s they were the best players around.

‘After a particular heavy night, Maradona swore he should have been somewhere else.’

Zidane, Figo ,Ronaldo, Weah, Sammer, Baggio and Van Basten are all players that I remember growing up and admiring what fine footballers they are – and in Ronaldo I am no different. You may argue that football isn’t about individual awards, and to be fair I agree.

I couldn’t care less if Ronaldo, Rooney or Scholes won a personal award as long as they are doing the business on the pitch for United. Of course with good performances for the team you get recognition – which in turn you’re pleased to see the players win due to the performances they put in week in week out.

Cristiano Ronaldo doesn’t mind where he plays football – as long as he is appreciated and told how great he is. Ronaldo is a superb footballer who now understands the importance of playing to the team’s strengths which ironically turned out to suit him. Yes, he was lured by the riches and history that Madrid can offer but was it the fact that if he played for a ‘fashionable European superpower’ he would gain even more praise for his footballing ability?

There is no doubt where the power lies in modern day European football with England dominating the semi finals in the past two seasons. Ronaldo would have been a fool to leave the European and domestic Champions because I have no doubt he will win the award and maybe just then he’ll appreciate what he has done and more importantly what United has done for him in the past half decade.

‘Ronnie, there’s nothing to worry about, he just asks you to cough. ‘

5 Comments on Why Ronaldo must win the Ballon D’or…