In the wilderness that is the international break there is sometimes little news or pointless transfer news that doesn’t deserve the coverage it gets – so I thought I’d see what fans opinions are on the ground that they call home. Nothing is greater for a side than having a fortress of a home ground. Imagine being an away player traveling to a game you don’t quite fancy and seeing your supporters out sung by the home support – it puts even further doubt in your mind. It’s obvious the strength that a home ground can give a club – but how important would you consider the ground that your football club plays at?

The Nepalese supporters club in all it’s glory.

Arsenal left Highbury in 2006 for a new ground, Liverpool are leaving Anfield for Stanley Park and Chelsea were linked to the idea that they’d be interested in leaving Stamford Bridge – will this ever happen to United? Other fans will argue that United fans are in a good position with regards to keeping the ground whilst making enough money from match day revenue to go into the transfer kitty (quite naively but hopefully!). You get what I mean. United are in the position to keep Old Trafford whilst being able to expand – allowing more supporters to see the games whilst also increasing revenue through ticket sales.

This was taken from the Telegraph from the 2006/07 season:

Last season United took about £3m in match-day revenue from home games at the 76,000-capacity Old Trafford – a staggering £87m for the 29 matches played there.

Although not fully focusing on the above statement, more on the fact that the Glazer bring sweet fuck all to the club, those figures – which highlight the sheer fact as to why clubs are forced into making these decision to leave their ground, a ground with history and memories just for financial gain. Since finding the above quote, I’ve come across an upto date statement from Reuters:

So were Arsenal forced into that decision to move grounds? Liam Brady seem to think so. Speaking in 2006 the Arsenal legend commented:

We all recognise why the board of directors made the decision. It is necessary if we are to be able to continue to compete at the level we are at the moment.

Brady was obviously sad for leaving the ground that he applied his trade at in the 70’s – but understood the reasons for leaving. However – is this always beneficial? Arsenal fans – although not all – always talk to me about ‘needing to spend big to compete’ and ‘Wenger must buy big into order to compete’. These fans may seem fickle in forgetting how Wenger can bring through youngsters with an entertaining brand of football but how can Arsenal compete with the top teams when constantly monitoring their finances?

In his aging years Wenger forgot where his office was.

So to United’s move from Old Trafford, I hope that this will never ever happen and I can’t ever see it happening. Created for a mere £90,000 – Old Trafford was assembled in 1909 and opening to the people of Manchester by 1910. The famous Scottish architect, Archibald Leitch, designed Old Trafford and ironically designed the three other grounds included in this post; Anfield, Highbury and Stamford Bridge.

These grounds have seen a lot of legends and hold a lot of memories. By moving grounds the ‘feel’ of the club can be lost. Gone are the memories of Meredith, Rowley, Byrne, Edwards, Best, Cantona, Keane and Rooney if Old Trafford was not United’s home. This is something that we should be proud of that we will never – hopefully – be in the position that Arsenal and Liverpool are. Is the financial gain more important than that of history, tradition and memories?

I’m not stating that Liverpool or Arsenal fans are happy to leave their grounds but i’m asking is the financial reward more important than those memories and years that will be lost (not talking about your memories as fans but the memories the ground holds) because of the need to earn as much money as your rivals? United in the Champions League final and Premier League run in last season showed that money doesn’t always buy you success – United and Chelsea’s financial situations are a million miles apart in terms of how the wealth was acquired. You may put it down to luck, in terms of United becoming a dominant force when the Sky money came in, but the fact is that United have always had massive support and players played for United because of the club – not the wages.

So to conclude – do you think the sacrificing of the home ground is justified in the evolution of the game of modern day football to compete with the top teams from around England and around Europe? For Arsenal fans that have moved to the Emirates – would you prefer the older, outdated stadium with the memories and history that it commanded or the potential to earn more money to compete with the like of United and Chelsea?

I for one am delighted that United are not in the position of our rivals – is the move to a new home an advantage to your rivals who travel to play you? Is it a necessity due to the influence that Sky has on our national game? Or is it simply another step in the evolution of football – what next – Chelsea moving to Moscow or Citeh to Shanghai? You may snigger but imagine fifty years ago do you think you would have even dreamed of the television coverage – the extension of half time to accommodate adverts – the astronomical wages and transfer fee’s commanded by players and clubs? Not to mention the idea of game 39. We’ll just have to wait and see what the future holds for our clubs and their homes – but I for one am glad that it looks like Old Trafford will always remain the home of United. 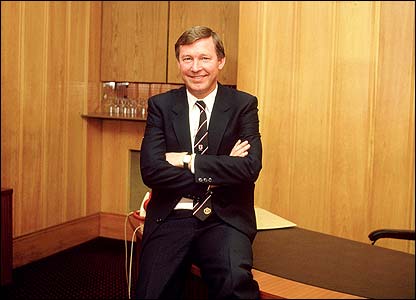