Ok, so we’re going to place all the match reports in the blog now so that you can have your say on the latest game in our comments section. Don’t worry you can still vote for your MOTM against Everton on our match report included within the Stretford-end.com template.

Don’t forget you can check out Darren Fletcher’s goal in the forum and also the lineup against Everton today on Stretford-end.com. 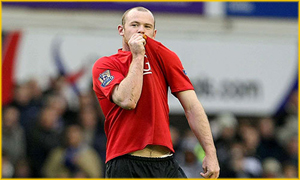 Manchester United threw away a golden opportunity of 3 points at Goodison Park as a spirited Everton second half saw them snatch a point.

In a dominating first half, the visitors took the lead through Darren Fletcher, whose marvellous composure afforded him the time to finish a stunning Ryan Giggs pass. It was Fletcher and Giggs who were at the heart of a thrilling first half display as United looked to put the game beyond their hosts before half time. Returning ex-Evertonian Wayne Rooney was in search of his 100th career goal and was denied it by a fine tackle by Jagielka.

Despite plenty of dominance in all the right areas , and despite a simply phenomenal performance from Reds legend Ryan Giggs in the centre, United didn’t create a great number of clear cut chances, and their inability to score the second proved costly. Everton started the second half very fiery after probably receiving a verbal lashing from David Moyes. Their plan was to unsettle United and it worked, though a couple of the home side were lucky to stay on the pitch after some dangerous tackles – notably, ex-Red Devil and current Toffees captain Phil Neville, who made a reckless tackle on Cristiano Ronaldo. Alan Wiley’s lenience was to Toffee’s benefit as with their full complement they chased down every United player, never allowing them any time.

Eventually their persistence paid off as the previously uncrackable central defence started to creak, the complacency Rio Ferdinand was renowned for 5 years ago began to creep back in, and Everton scored as record signing Felliani headed in a move started by a throw by, you guessed it, Phil Neville.

Soon after United had Van der Sar to thank after another Rio lapse saw Yakubu free, and see his shot tipped onto the post.

More tasty tackles flew around, Rooney’s harsh booking led to more boos which prompted him to kiss his badge and wave to the crowd – cementing his allegiance to the United cause in such a manner that Ronaldo should have been taking notes from – but the action was probably the reason he was brought off by Sir Alex Ferguson, wary of referee Wiley’s trigger booking system for United players after a first half where Everton supporters frustration of being outclassed manifested itself in bizarre abuse of the referee.

In fairness, the champions never looked liked scoring – aside from two glaring Ronaldo misses (one following a sumptuous Anderson through ball), as notable for their relative easiness as the lack of concern shown by the Portuguese superstar upon missing them. His dying seconds free kick (from 35 yards) was typical of his lackluster display, as United were made to pay for a combination of their complacency and profligacy.