Time is running out for Evans’ declared one reputable newspaper columnist in the aftermath of United’s 6-1 defeat recently; many other media outlets decreed that Evans’ selection was akin to nihilistic exuberance by the manager, Sir Alex Ferguson, and the main cause of defeat (a more thorough reflection can be found here on this last point). Yet the evidence seems to depict a rather different story altogether, with Evans the most natural and talented centre half to rise from the youth academy since Wes Brown – and without the injury record at that. In fact, at the tender age of 23 years old, time is seemingly in vast abundance for Jonny Evans.

Before we continue, let’s get a popular myth out of the way shall we, and this is: That to support a player who, in the eye of the vast majority of fans is an average player at best, is some kind of fashion statement, or attempted snobbery. Arf.

Certainly, there is no dogmatic or myopic backing of Evans from these quarters; quite the contrary, I cant help but be alarmed by some of the journalistic naivety shown by leading football commentators, and more than that, dismayed at some of United’s core support who have revelled in glee at times during the past 12 months in barracking the young defender – highlighting his every ‘error’ and often voicing their displeasure at his inclusion in the starting line-up (God help him if he recorded three consecutive red cards against his fiercest rivals, hey?).

And we have been here before haven’t we? In recent years we have had the majority tell us that a certain Michael Carrick has no discerning quality (four titles and three Champions League finals in five years later, he is still quite clearly our most polished central midfield performer); that Berbatov is useless and couldn’t score in a brothel (the league’s joint top scorer last term and cool creator connoisseur); and that Nani is a greedy diving ratbag who should be sold (currently one of Europe’s most exciting attacking prospects, United’s player of the year, and dazzlingly efficient).

But perhaps the more relevant comparison should be made with one, Darren Fletcher, the ‘love child’ kid of Fergie’s? That’s the one. A product of the youth system who broke into first team contention at 19 years of age in 2003 (where have those eight years gone?!), Fletcher was immediately set upon by the United support. ‘Too thin’, ‘no technique’, ‘prone to errors’, ‘clumsy’ were just some of the favourable declarations made by many, preferring to judge the player for what he was not rather than what he was – a player who had just broke through the ranks, was played out of position on the right wing (I say out of position because he quite clearly couldn’t cross the ball), and was vying for a place in the team with the likes of Beckham, Giggs, Scholes and Keane.

As the years passed, his detractors used that ever so convenient tactic of ‘moving the goal-posts’; ‘he’s getting better but I could look good alongside Roy Keane’ they would smirk – all the while becoming a more deeper shade of crimson as Fletcher went on to become a fine central midfielder, and one of the league’s most consistent and combative performers – so much so that the same United fans would later decry his absence in the 2009 Champions League final as the key reason for our lackluster performance and defeat to Guardiola’s Barcelona. Hell, they even created a song for the Scotsman, a song that at first glance seems to be infused with mocking self-parody, but with further inspections turns out to be tinged with further conceit: ‘Darren Fletcher, Football Genius’.

So where was I? Ah yes, the ‘Evans phenomenon’. The idea that a player can quite literally nudge the home-sick Pique (a year and a month older than young Jonny) back to Spain and be lauded by Sir Alex as ’…Manchester United’s future, no question about that.’ and still be an ‘average defender at best’ or ‘an accident waiting to happen’ is frankly ridiculous. ‘But but but …. Fergie has got it wrong before’ they complain; ah well yes he has; but he has soon dispatched with the slackers (ask Djemba Djemba, ask Ben Foster). True too, that he was way out with his disastrous prediction that Welbeck would be the star of 2010! A disastrous prediction I’m sure you will agree.

That Evans was once bullied by Carlton Cole is true however – he had a torrid game. But did he have a torrid game behind a dysfunctional midfield partnership of Fletcher and Anderson? The very same sparingly used combination that was given the reigns in the aforementioned Blue Moon travesty? Okay, I am being conceited, but the basic point still stands; a centre half is only the last part of a defensive dereliction, and often he takes the fall for a woeful team performance: he relies on his teammates more than any other.

The delectable Andi Thomas recently opined: ‘Let’s sort it out now, for once and for all. It’s not quite that Evans is good but not good enough; rather, he’s better than he seems, but he’s worse than he should be.’

If ‘worse than he should be’ means he ain’t quite at the level of talented twosome Nemanja and Rio, then I guess I’d wholeheartedly support Andi in his observation. However, there is discernment in the article, which seems to place Evans as a kind of un-cool outcast in the United camp – an unfortunate but common consensus amongst the United majority I think. And whilst Smalling and Jones are huge talents, Evans has been there and worn the red t-shirt already, having had a sterling couple of seasons before last – and a fine spell under Keane at Sunderland. Called up to Northern Ireland squad before making his first team debut, he holds the second longest clean-sheet record (alongside Vidic) record at the club, and has the potential to become a fantastic defender if he continues to progress steadily.

He had a below-par season last time around, and Evans himself admits that he let the abuse get to him at times last season. And you would too – it only took one look at my twitter timeline in order to see the frivolous, and often unkind, invective that was slung his way. The present vocal dissatisfaction was inevitable then wasn’t it? The boy is clearly doing well – astutely attacking everything in the air or on the ground – and has been Fergie’s most consistent defender thus far this season; it is only a matter of due process that those fans who gave him an earful last season should stick to their guns; a stubborn bunch aren’t we? Brash imprudence, the rule rather than the exception, as Marina Hyde alludes to here:

‘Alas, this [football fans’ rights] is a subject which makes the right to bear arms look like the least contentious idea in history. Once you bring football into the equation, an amazing number of truths cease to be self-evident. There are evidently some who judge that the mere purchase of a match ticket means they are perfectly entitled to bellow the hope that a player’s kid gets cancer…’

Where to now? After signing him up to a long-term deal in 2010, Sir Alex commented: “Jonny has proved himself. He has signed a new contract and helps to provide a good foundation for the club for a long time.”

This of course doesn’t give Evans the exclusive hold on the number 6 shirt for the foreseeable – he will have to work incredibly hard as he will know only too well. But he doesn’t have to become the next Vidic or Stam either, as many believe he must to ‘succeed’; rather, he could become the next Johnsen, the next Brown, or even the next Bruce – and forge a very decent career at the world’s biggest football club. And he certainly has it within his grasp to do so. True, Smalling has the pace and guile, Jones the passing ability and ambition, but it is Evans who has the greater anticipation and positional sense at this stage; and the one aspect of his game which was worthy of attention, his passing, has dramatically improved in the last 12 months, so much so that he is now able to illustrate a passing range with either foot and is the envy of many.

Football fans have always lauded a new signing who has shown even the tiniest hint of raw talent, and for last season’s Smalling read this season’s Jones. This is fine, but it shouldn’t be to the detriment of another player. To have three exciting young centre half talents together in one squad should be reason enough to be beyond satisfied – the envy of the league with five central defenders vying for two positions. It seems rather an ‘un-United’ thing to do – pleading for unity – but it is a must in this season more than most. Get behind the players (yes, even Anderson) trust the manager, trust his instinct for getting it right time and again, and ignore the media myopia. Altogether now: ‘Jonny Evans, Football Genius!’ 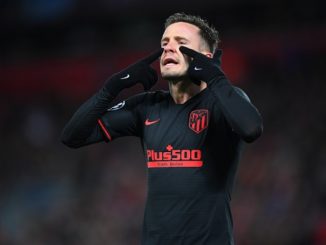 Manchester United Might Pay Up To £70m For Saul Niguez