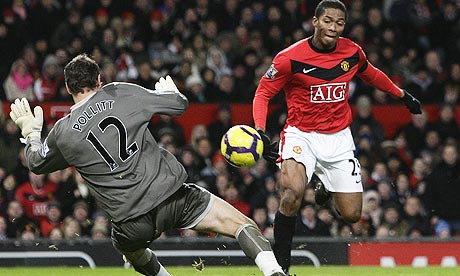 With the way the league campaign is panning out for all sides, plenty of defeats (or in our case, draws) it looks like the smallest margins could the difference in the Title race.

The forgotten man of the Manchester United squad could be the swing that brings us our 19th Title.

Since his signing from Wigan in June 2009 he has become an important player in the squad and offered ‘Old School’ wingplay not seen since the mid 90s and Kanchelskis/Giggs.

As Valencia settled into the squad he became a big influence in the attacking dimensions of the team. By the end of his first season he had formed a great understanding with Wayne Rooney and it could be argued that Valencia missing this year has affected Rooney in front of goal.

Coming into this season Valencia was all set to cement his place in the team, a roasting of Ashley Cole in the Community Shield looked a sign of things to come. However less than 3 weeks later following a freak collision in the Champions League against Rangers Valencia was staring at missing at the whole of the season. Catching his foot in the ground had led to a broken leg and dislocated ankle.

The injury to Valencia has allowed Nani to blossom and basically make the right wing his own without any real competition, however with the news in the last few weeks that Valencia could be back by the end of February it raises some interesting questions.

Will Nani continue on the right?
Its clear that Nanis’ best form has come out on the right, but is he now able to offer a similar level of threat out on the left? I feel the development of Nani in the last 18 months mean that he would be able to offer a dangerous threat out on the left. The ability to beat the man down the line, plus his ability to come inside and unleash a hammer of a right foot gives the team options. Its fair to say that we don’t get the same threat from Giggs or Park and Rooney is never totally comfortable playing from the left.

Can Valencia recapture his pre-injury form?
This is a question that can only be answered once we see Valencia back involved in the first team squad. When Alan Smith suffered a similar injury he was being groomed as a central midfielder and lost part of his tough tackling attitude. The fact that Valencia is a winger and his game is more based on pace and skill then he may not suffer similar problems. The only real question to ask is whether he has kept the pace he had beforehand.

Will the return of Valencia reinvigorate Rooney at a vital time?
Its widely accepted and acknowledged that Valencia and Rooney formed a great understanding last season. Valencia was heavily involved in a large number of goals in what was the best goal scoring season of Rooneys career. His style of play which involved getting to the touchline and getting balls over meant that Rooney knew where he needed to be in order to benefit. Having Nani out on the wing this season has meant a more unpredictable style which involved Nani coming inside often and looking to shoot or play to feet. This appears to have benefited Berbatov more, resulting in his goals return being excellent so far this year.

Valencia could be back in squad action by the time Chelsea return to Old Trafford and we have a difficult trip to Liverpool.

A 4-4-2 formation with Valencia on the right and Nani on the left would give both Berbatov and Rooney the players who they work well with. This also offers a major threat from either flank in many different ways including getting to the touchline, coming inside and attacking at pace.

4 Comments on Ace in the Title Race…?