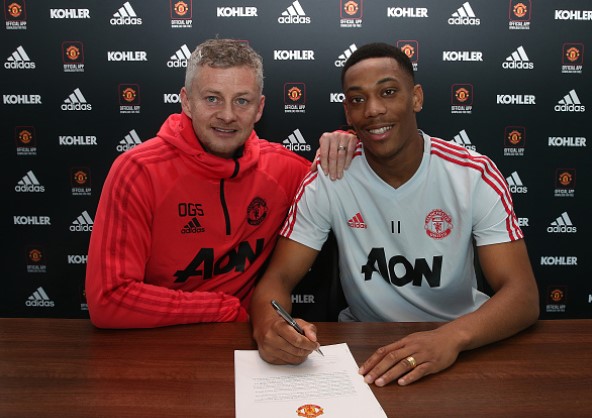 Rumours about Anthony Martial potentially leaving Manchester United seem to never actually stop. It was often mentioned last summer that Jose Mourinho wants to sell him and after a row following player’s leave when he got his child born seemed to make things even worse.

But things cooled down a bit, Ed Woodward made a statement that he will not be sold and then after a run of great performances in Ole Gunnar Solskjaer’s early days in the dugout Martial signed a new contract. It will keep him at the club until June 2024 with an option to make his stay a year longer. Or will it actually keep him that long?

By the rumours we have seen in the past week, Martial could be leaving the club this summer. After Martial signed a new contract, here is what Solskjaer had to say about him: “It’s a confirmation that we are happy with him, we believe in him he’s got fantastic potential, he’s had ups and downs he’s been top scorer, he’s been developing, as a young lad moving abroad it’s not easy but he knows he’s going to stay here for the coming future and I believe in him.”

However, recent reports make a case that Solskjaer has not been happy with the player’s attitude since and his performances on the pitch deteriorated quickly. Since the match in Paris against PSG, Martial has produced just one goal in 10 appearances and the rumours started swirling right away.

But that leaves us with the question should Man United sell him this summer if they could and what could that lead to?

Martial was a big bet for Man United back in 2015 when they signed him for Monaco. He is a great talent, but since he was 19 he did not really improve all that much. Remembering his early days at the club, Martial was taking everyone by the storm, but in recent times he has become all too predictable and unimaginative. This season, he has played 2086 minutes of Premier League and Champions League football combined, which is 23.18 full matches. In that time on the pitch, here is how he fared.

With 11 goals (10 of them in the league), Martial averages 0.47 goals per 90 and with two assists on top of that, we get a tally of just 0.56 goals and assists per 90. Half a goal per game is not great for such a talented winger who often played up front. With 1.9 key passes per 90, Martial is clearly far from the very creative type of winger, but he does not produce much elsewhere either. Just 2.1 shots per 90 is way below good enough and then there are expected goals.

In the league, his expected goals stand at just 7.78, which means that he has been overperforming with these 10 goals this season. His average shot has a value of 0.20, which is pretty good, but he can getting into more central positions and definitely shooting more often.

His attitude on the pitch can go wrong when things do not go right for him in certain instances and that can be frustrating for the manager and his teammates. However, a player at the age of 23 can still improve massively and that will be on Solskjaer to do. Selling him this summer would make things even more complicated for Man United.