The international break is the perfect moment to take a stop and see where teams are headed towards the end of the season. And it won’t be any different with Manchester United. The Red Devils remain alive on the Champions League, and they’re also in the hunt for a UCL spot for the 2018-19 campaign considering they sit in fifth spot of the Premier League standings.

However, this is not the only thing club officials will do during the coming weeks. March is the perfect month to start heating up the transfer talk. Knowing the season ends in roughly two more months, teams already have an idea of where they might finish and which areas they need to strengthen looking towards the 2019-20 season. As it’s always the case, there have been plenty of rumours regarding Manchester United players. Here are some of the most important ones.

It’s not a secret that Alexis Sanchez has underperformed this season. The Chilean winger has struggled to settle at life in Old Trafford, and many fans want him gone. Especially since he’s the highest-earning player at the club, but his player has been quite far from that standard. And while the Chile international is injured, there’s been talk of where he might be playing next season. Hint? It might not be at Manchester United.

Inter Milan and Juventus are both interested in the former Barcelona and Arsenal star, but it seems The Old Lady is leading the race to sign him. There haven’t been talks between both parties. However, the reigning Serie A champions would love to pair Sanchez and Ronaldo upfront. Will Manchester United bite and part ways with a talented player that just hasn’t been able to perform as expected for The Red Devils?

It’s well known that David De Gea wants to play for Real Madrid. We also know Los Merengues want to sign the Spain international. And while they failed on their attempt a few years ago, they could be ready to make another offer this summer. But this time it would be a straight-up swap between goalkeepers: Madrid would get De Gea, and Manchester United would get Thibaut Courtois.

However, there are several hurdles to go through before this rumour becomes a reality. Manchester United would have to accept joining Real Madrid, and they would have accept the swap. Plus, we don’t know if Courtois is keen to return to the Premier League. In fact, recent reports have indicated that he would “prefer” a move to PSG if he doesn’t stay at the Bernabeu next season. So we might have to hear about this one for quite a while.

Last but not least, we have Manchester United getting linked to an striker once again. This time is Antoine Griezmann, as the French star has grown increasingly frustrated with life at the Wanda Metropolitano. In fact, he would be open to leave the club as soon as this summer. Even if he has to take a pay cut somewhere else.

Bayern Munich and Barcelona have been linked with a switch for Griezmann, but we shouldn’t rule out The Red Devils. They’ve been scouting the former Real Sociedad player for a very long time, and he could form a deadly attacking trio alongside Romelu Lukaku and Marcus Rashford. Will Manchester United step their game up to sign one of the best attackers of the past three seasons? 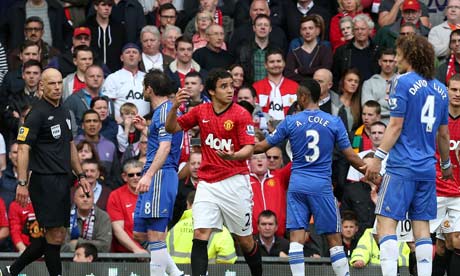