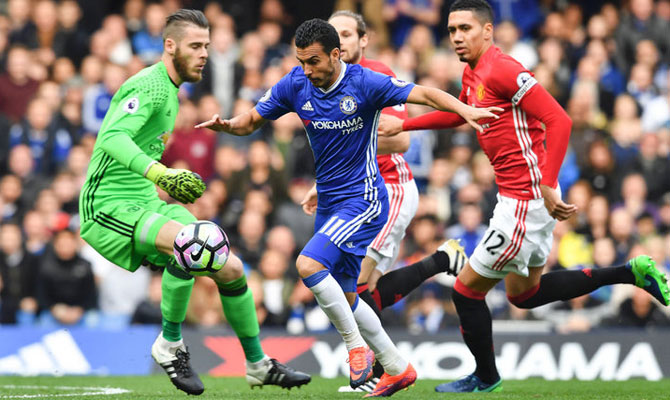 Manchester United are returning to FA Cup action this Monday night and the opponent will be a tough one once again. After beating Arsenal in fourth round, now Chelsea at Stamford Bridge are the next challenge. This will be a rematch of the last year’s final and Ole Gunnar Solskjaer and his players are getting the chance for a revenge.

A place in the sixth round would continue improving morale at Old Trafford, despite the 2-0 loss to PSG in Champions League this past Tuesday.

What Happened Against Man City?

Chelsea maybe won their Europa League match in Sweden against Malmo, but the 6-0 loss against Manchester City is still the main topic surrounding the Blues. Maurizio Sarri’s team was truly obliterated, conceding four goals inside the opening 25 minutes of the match. It was ugly for all Chelsea fans and everyone is asking – what happened?

First of all, a truly wonderful team was at their best, but it was Chelsea’s attitude that struck the fans. Sarri’s players never really looked eager to put up a fight, as they often did in later stages of both Antonio Conte’s and Jose Mourinho’s reigns. Plenty have criticized the manager for the “Sarriball”, but Chelsea did not play “Sarriball” against City. They did not play anything at all, it was that poor.

Chelsea have been inconsistent this season. Apart from the strong start of the season, ever since it looked like a rollercoaster. They are unpredictable and their performances vary from exceptional to abysmal. That is why it will tough for Man United to predict in what mood will Chelsea be on Monday night.

In their last three away matches they conceded 12 goals and failed to score in each one of them. Man City scored six, Bournemouth scored four and Arsenal two. But then there was a 5-0 drubbing of Huddersfield and a 2-0 win against Man City in early December.

Imbalance On The Flanks

This was a problem Man United often had in recent times, especially under Jose Mourinho – Chelsea’s left flank is much better than the right flank. Marcos Alonso is a much bigger threat for opposition than Cesar Azpilicueta, but he is also a bigger liability defensively. Not to mention how much better Eden Hazard on the left is than Willian or Pedro on the right.

The Belgian has 12 goals and 10 assists this season in the league, but he still feels like being unable to unlock his potential and become a consistent, deadly attacker. Chelsea could be more hurt on their left flank, but also the biggest danger will come from that side.

This often proved to be crucial in stopping Chelsea this season. Jorginho is incremental part of Sarri’s 4-3-3 and he always plays and always has the same role. Sarri is not the guy to crop and change, he is completely the opposite. And this season many sides showed that Jorginho can be nullified with aggressive pressing, like Tottenham managed to do it in their 3-1 win. Chelsea’s gameplan falls apart when Jorginho is pressed constantly. Too bad Jesse Lingard is injured, as he would fit that role perfectly.