Manchester United have been in pretty good form at the moment. Consecutive Premier League wins against Crystal Palace, Chelsea and Liverpool have The Red Devils in second place of the standings, but now the team needs to switch the focus to the UEFA Champions League. Jose Mourinho’s men will enter this game against Sevilla looking for a place in the tournament’s quarter finals after drawing 0-0 on the road in the first leg.

On Manchester United’s end, Jose Mourinho announced that the squad is not going to have too many changes in comparison to the side that defeated Crystal Palace and Liverpool this past week. latan Ibrahimovic and Ander Herrera remain out, as well as the trio of defenders of Phil Jones, Daley Blind and Marcos Rojo. Anthony Martial missed both games last week, but Mourinho confirmed he is fit and the French star trained with the team. Zlatan participated in the workouts as well. Paul Pogba is doubtful, and all signs indicate he will be a game-time decision.

On the other hand, Sevilla do not have confirmed absentees but several players are doubtful and could miss the game at Old Trafford this Tuesday. Among those, we can find Lionel Carole (muscular), Daniel Carrico (thigh), Sebastien Corchia (groin), Jose Mena (groin) and Jesus Navas (calf). The former Manchester City star is the only one who would be a starter if fit, however, while the absences of Corchia, Carrico and Carole certainly weaken the side defensively.

Manchester United are coming off a deserved 2-1 win over Liverpool at Old Trafford. They also registered a comeback 3-2 win against Crystal Palace at Selhurst Park after losing 0-2 early in the second half earlier this past week. Recent results – four wins in the past five EPL games – have lifted United to second place in the Premier League standings and even though they might not have enough time to catch Manchester City, they appear to be in a good position to secure a Champions League berth for the upcoming season. In the Champions League, the team has a slight edge ahead of this game since the first leg ended with a scoreless draw.

On the other hand, Sevilla are coming off a 0-2 loss against Sevilla the last time out. They have two wins and two losses in their last four Liga matches since the first leg against Manchester United, and both losses have come at home. They register one win on the road, but it was against a lowly Malaga side that can’t get a win to save their lives at the moment. Knowing they conquered just two points on the road during the Champions League’s group stage, we might see a cautious Sevilla here.

The last time these two sides met, Manchester United held on to a scoreless draw at Ramon Sanchez Pizjuan last month in a game where Los Nervionenses could have easily escaped with the win based on all the scoring chances they missed. That was the first official meeting between both clubs, and it will also be the first official match for the Andalucia side at Old Trafford. Will they pull the upset, or will United hold on?

United are in a good run of form this season, and they seem to be getting hotter at the perfect time. Considering that with Sevilla’s cautious approach on the road, The Red Devils have a good chance to sneak into the CL’s quarterfinals for the first time since the 2013-14 season. 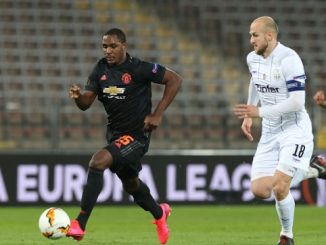