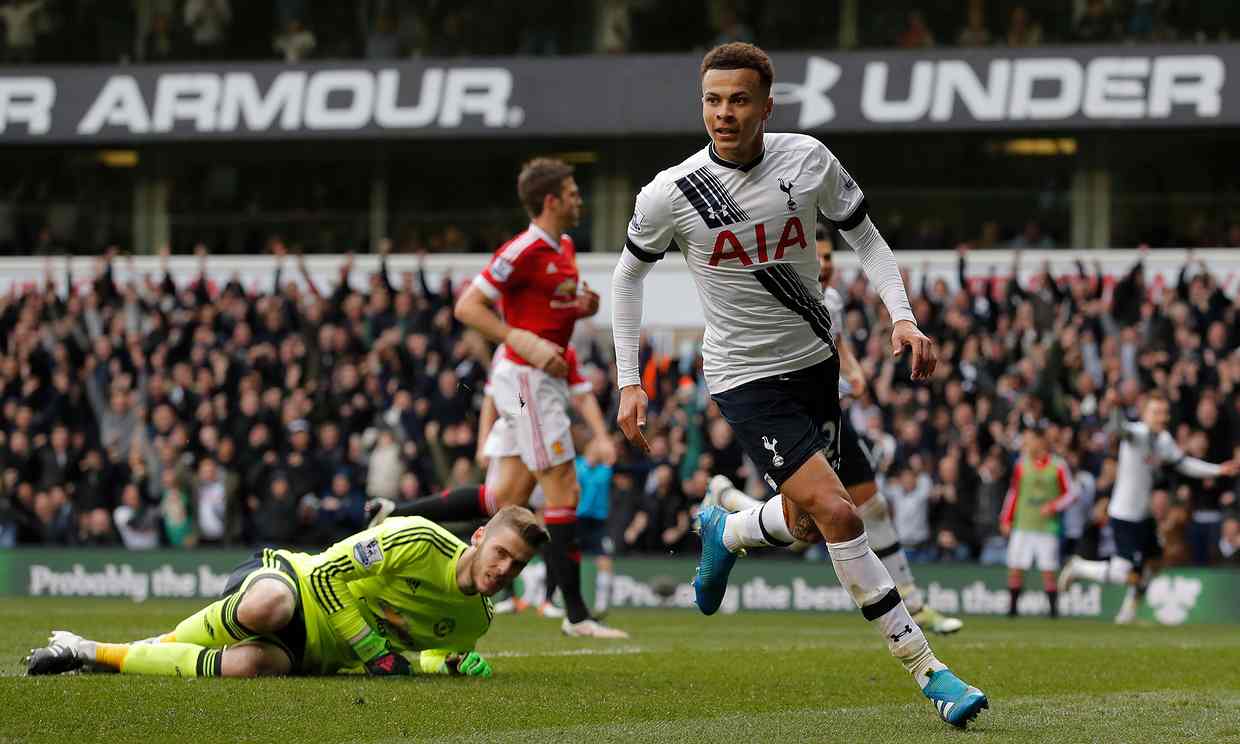 They say goodness comes to those who wait, however – with the kickoff delayed by thirty minutes due to traffic problems around North London, it was Mauricio Pochettino’s men who were revelling in the goodness that three points bring. Dele Alli, Toby Alderweireld and Erik Lamela scored three goals in six minutes as United were blown away by a Tottenham side still with hopes of clinching their first title since 1961. Manchester United were looking to close the gap on Manchester City in fourth in a final fight for the final Champions League place, but with six games to play and an inferior goal difference – it is looking unlikely Louis van Gaal will achieve that goal.

United played well in the first half and pressed Tottenham back. However, it was the Argentine Lamela who spurned a glorious chance, heading wide when it appeared easier to score past David De Gea. The visitors rarely threatened Hugo Loris in Tottenham’s goal, however – it was Anthony Martial who had United’s best, and only, chance of the game – when he brilliantly glided in from the left hand side past two Spurs defenders, only to smash the ball straight at the French goalkeeper with the game poised at 0-0. If it was tight for the first hour, as soon as Alli opened the scoring, United fell apart.

Lamela won the ball from a scrap, which fell to Harry Kane, who swept a good pass out to Christian Eriksen. The Dane was given far too much space by substitute Matteo Darmian – who replaced the impressive Timothy Fosu-Mensah, before crossing a beautiful ball into the on rushing Alli, who slotted past David De Gea. It got worse for the Italian and United, when the fullback gave a foul away for a late tackle on Kane. Lamela swung in a deep cross from the left hand side before Alderweireld headed home under a soft challenge from Marcus Rojo. A mere two minutes had elapsed before De Gea was once again picking the ball out of the net following a powerful Lamela strike.

United were well beaten by a much better side, despite a decent first half showing, and it is highly unlikely the club will finish in a Champions League spot this season.

Bonkers substitution and lack of leaders

Despite arriving to the ground very late, Louis van Gaal was adamant that this played no part in side’s 3-0 defeat at the hands of Tottenham and cited how well the home side played. Both points are very true and Tottenham were the superior side when looking at the game as a whole – but the Ducthman didn’t help proceedings by deploying Ashley Young as United’s focal point of attack. It didn’t work, with Young failing to register a single shot on goal and not offering any running in behind the defence, nor hold up play. This of course is unsurprising, considering the fact that Young is a winger and has never, from what I can remember, been played up front as a lone striker. It should also be noted that Young hasn’t played a first team match since the 1-0 victory over Liverpool in January.

I wanted more running in behind because, in the first half, we didn’t have an attacking point and that is the reason.”

So why did van Gaal withdraw Marcus Rashford and replace him with Ashley Young? He felt that Rashford wasn’t making as many runs in behind the defence, which is why Young was brought on. It was an odd substitution considering that United had a decent first half and Rashford was lively, if ineffective, over the first forty-five minutes. Of course, sometimes in football it doesn’t happen for you at points in the game, but to withdraw after only a forty-five minutes to be replaced by a winger playing out of position? Square pegs in round holes appears to be the real philosophy of Louis van Gaal.

If the baffling substitution wasn’t enough, United’s capitulation was an embarrassing realisation of a side that no longer has the spirit and desire to go toe to toe with England’s elite. Many reds were citing the famous quote that Sir Alex Ferguson once remarked in his team talk before United took to field to play Spurs along the lines of “Its only Tottenham” – which is a far cry from what was on display at White Hart Lane today. Robson, Bruce, Keane, Cantona, Stam, Vidic are just a few of the leaders United fans have watched over the years.

The standards set by these players are not being met by the current crop of players. The way the side crumbled after going one down screams out the fact that United are lacking leaders and characters in the dressing room. You would expect a United side of old to throw the kitchen sink at the opposition, but van Gaal’s teams rarely have a plan B to change losses into draws and most certainly draws into wins. You would expect the likes of Chris Smalling, Daley Blind, Morgan Schneiderlin, Marcus Rojo and most certainly Michael Carrick to set the standards of today. However, sadly, this is a definite quality this United side is lacking.

Until the first goal, we were at least the equal team and the better chance was for us with Martial. It was a big chance, with a big space and a big time for him, but we gave the goal away with miscommunication and then you know what happened next. Within five minutes, we were out of the game.”

If Roy Keane was a reflection of Sir Alex Ferguson on the pitch, I couldn’t even imagine who Louis van Gaal would believe is his voice on the pitch. The Dutchman could well be on his way out if United do not qualify for the Champions League next season, but whether it is van Gaal, Ryan Giggs or Jose Mourinho in the hotseat next season – they will have a mountain to climb. The famous 5-3 victory over Spurs in September 2001 was down to character, resilience and quality of the likes of Andy Cole, Seba Veron and David Beckham. Of course, this Spurs side is on another level in comparison to fifteen years ago, with a top class manager, who has done exceptionally well since joining from Southampton in 2014, and a whole array of young attacking talent.

Louis van Gaal has spoken before about his trust in youth and has referenced the amount of young players he has given a debut to this season. Some reds feel the Dutchman has stumbled across the promotion of youth at United, considering the amount of injuries the first team have had this season, but one player caught the eye today in a red shirt. Timothy Fosu-Mensah was a shining light in what was a disappointing day at the office for United. The Dutch fallback was a constant menacing going forwards and his powerful overlapping runs when Juan Mata had the ball, pushed back Danny Rose. Rose was able to get forward later on in the first half, but Fosu-Mensah’s positivity and drive was posing a serious problem in Tottenham’s desire to push forward.

Yeah, he did his job very well but he is injured and he has to go out and that’s a pity for the team. But it was a very difficult selection for him because I could also have chosen Matteo Darmian and I cannot think that a consequence of Timothy’s injury is a 3-0 defeat, I don’t believe in that.”

Dele Alli had a quiet game before he scored the opening goal mid-way through the second half. Fosu-Mensah had been substituted at that point and his replacement, Darmien, was all at sea on the right hand side of defence – unlike the Dutchman. Alli had looked frustrated early in the second half after losing the ball to a few Fosu-Mensah tackles. The youngster was composed on the ball, covered for his centre halves when they were up the pitch and was an attacking outlet. It was Alli’s tackle that injured Fosu-Mensah and his removal from the field of play certainly coincided with United’s collapse. Fosu-Mensah was substituted in the 68th minute. Ten minutes later, United were down by three. 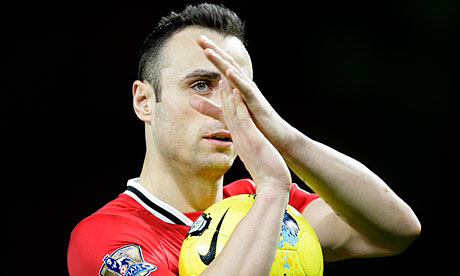 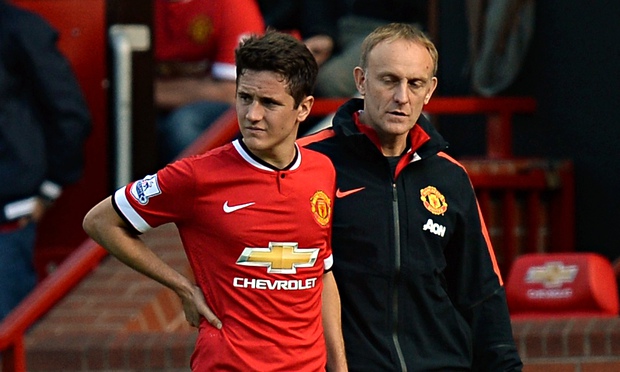