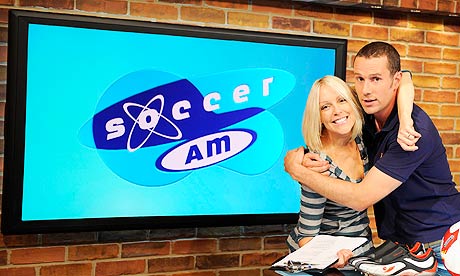 Manchester United travel to Abbey Road for the FA Cup fourth round tie against League Two outfit Cambridge United. The visitors last played the U’s back in 1991/92 (when United won the competition) beating their opponents 4-1 on aggregate. The match at Abbey Road finished 1-1, with Brian McClair scoring for United.

One man who was there that day is Max Rushden, Soccer AM’s co presenter since 2008, who has kindly answered a few questions for us ahead of the tie. What does he think of straight talking Louis van Gaal? Was Dion Dublin really responsible for United buying Eric Cantona? And if he could ask Sir Alex Ferguson one single question – what would it be? To find out – read on! –

Hello Stretty Rant. I am well. It’s 6am in a hotel in Bournemouth (I’m doing something for talksport) so I’m answering on my phone. Do excuse the brief responses!

2) Who was your boyhood idol at the club?

We had a speedy right winger called Michael Cheetham in the glory years of the early 90s.

It was slightly unfair really. I was 10 and we just won all the time. It gave me a totally unrealistic view of what it’s like to support Cambridge.

So many great memories of those cup runs. Here’s a list:

1990 – David Thompson’s own goal in the last minute of extra time to give us a 1-0 win over millwall in the 4th round. 35 yards out under no pressure. We signed him 5 years later!

Chris leadbitter’s overhead kick. Lee philpott’s volley in the 2nd replay against them.

91. Hammering Sheffield Wednesday in the 5th round. Shaggy and dion scored great goals

Then going to Highbury and scaring the life out of the Arsenal fans when Dion equalised.

It wasn’t just the cups though. We got promoted in both of those years too.

Can we do better? Well I hear Valdes is starting for you – and what’s he ever done??

4) How would you sum up Luke Chadwick and what did you make of his time at United?

When you say United, I presume you mean Cambridge!

I interviewed him last week for Soccer AM. Such a genuine guy who came to the U’s and said pay me what you can.

And quite rightly said his debut for us at home to welling was bigger than the Champions League Semi vs Bayern for you!!

5) What are your memories of Dion Dublin and would United have signed Eric Cantona had he not broken his leg against Crystal Palace?

How long have you got? I love Dion. I always try and hug him for longer than he really wants.

6) What have you made of United under Louis van Gaal this season?

7) If you could have one United player on the Soccer AM sofa, past or present, who would it be and why?

Ooh. Probably Jesper Olsen. But if he wasn’t around, it’d be hard to argue against David Beckham. I interviewed him once as part of our World Cup bid. Lovely fella.

8) United once famously lost 3-0 at home to York City in the League Cup back in 1995 – is there any chance of that on Friday night at all?

9) Tell us a bit about the youngsters coming through and also, who should United fear in the first xi?

Ryan Donaldson is a quality player who can take players on. We’ve got a lad on loan from Norwich the other day who scored two on Saturday. I really hope Tom Champion is fit. He’s very important in the middle. We’re a good side. Clearly we need to be brilliant and hope you are rubbish.

Would you like a cup of tea? (I’d hope that would break the ice and I’d get some follow up questions)