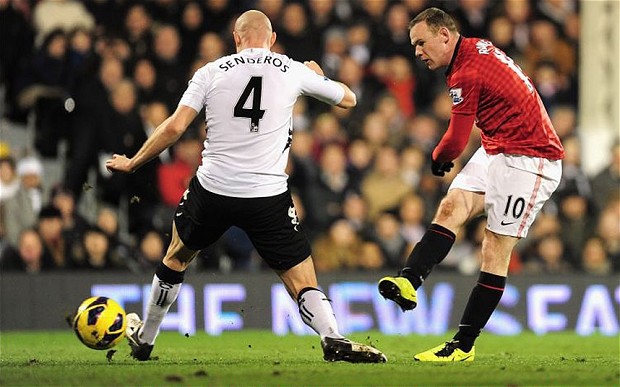 Rooney scored the winner in this fixture last season.

Hey there sports fans. Plucky little upstarts Manchester United take on Martin Jol’s entertaining Fulham side at Craven Cottage this Saturday, on the back of three consecutive wins in all competitions. Coming off their biggest win of the season – a 4-0 League Cup beating of Norwich – United will be hoping to build some momentum in their league campaign after a pretty rotten start. Mr. Moyes has an almost fully-fit squad to choose from; Danny Welbeck is absent after spilling a bucket of Gatorade on his knee. In this fixture last season, only two things happened: 1) the lights went out around halftime, and 2) United won thanks to an excellent Rooney goal. Fulham have a decent record against United in recent years, winning in March and December 2009 and drawing 2-2 in August 2010.

Here is a list of things I know about Fulham, two of which are relevant to Saturday’s match:

If this were Alex Ferguson’s Manchester United, this preview would have said some nice things about Fulham, followed it up with things like “it’ll be a tough game” and “United can’t afford to be complacent”, and then gone on to confidently predict a United victory, which would usually have been followed up with a United victory. This is Mr. Moyes’ Manchester United, however, and those safe, loveable realities we’ve clung to for so long no longer exist. The current reality is that United have started winning, but have not yet started playing particularly well, though there are some encouraging signs – chiefly the gigantic neon sign held up by Adnan Januzaj which reads “I am an incredibly good football player, and I’m only 18, pick me!”

Saturday’s selections will be interesting, not least in defence: Rio Ferdinand and Nemanja Vidic are fit and both played 90 minutes against Norwich on Tuesday, after Jonny Evans and Phil Jones started the previous three games. Against Southampton and Real Sociedad, the Evans-Jones combo showed lots of cohesion and no shortage of ability – Evans’ passing and reading of the game complementing Jones’ athleticism and tenacity. Just as we started saying nice things about them, though, Evans and Jones showed their flaws against Stoke, with poor positioning and silly fouls almost being brutally punished, before weak Stoke finishing and a United comeback (finally!) bailed them out in a scarcely-merited 3-2 win. Rio and Vidic weren’t really tested on Tuesday, and the elderly duo haven’t featured much since starting first five league games of the season together and suffering badly in the Manchester derby. Mr. Moyes’ centre-back selection on Saturday could be indicative of which pairing he really sees as first-choice for the rest of the season. Patrice Evra and Rafael should man the fullback slots, despite some tabloid rumours this week that Moyes is unhappy with Rafael – those are tabloid rumours, so they are most likely totally untrue, but the mere suggestion that he doesn’t rate the adorable Brazilian right-back is enough to be irritating.

Further up the field, Michael Carrick should return to the side, along with Marouane Fellaini. Both men have started the season poorly, and although the new boy has taken most of the criticism, Carrick has done a lot less than would be expected of him, unwittingly backing up Sir Alex’s old assertion that he’s a slow starter to a season. Given United’s well-documented lack of depth in midfield, a sharp uptick in form from both would be most welcome. On the flanks, it could be a toss-up between Antonio Valencia, Ashley Young and Ryan Giggs for the two spots – I reckon Adnan will get a rest after playing (and excelling again) on Tuesday, and Nani perhaps in the doghouse after last week’s wretchedness against Stoke.

Robin van Persie should be OK to start after shaking off toe and groin injuries suffered while carrying a fridge home from Selfridges a few weeks ago. By his own high standards, Robin’s had a poor start to the season, missing a games with injuries and at times looking isolated from the side’s attacking play. Fortunately, he’s been scoring goals throughout this poor run, and is our top scorer in the league with five so far. Wayne Rooney is in good form and should start up front, despite Chicharito’s excellent scoring form in his last few appearances. With an away trip to Real Sociedad coming quick after this encounter, Mr. Moyes will have to use the squad wisely to get good results this week. If all goes well on Saturday, we should see United run out as winners, maybe 2-1 or 3-2.

Update: Apparently, Carrick is a late doubt for the match. If he can’t make it, perhaps Tom Cleverley will come into the side, despite having played 70 minute against both Stoke and 90 minutes against Norwich in the past week. 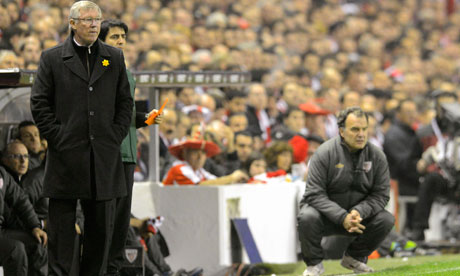 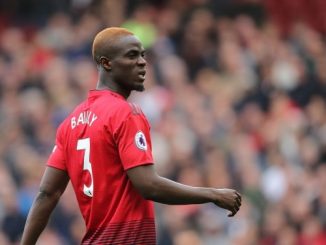