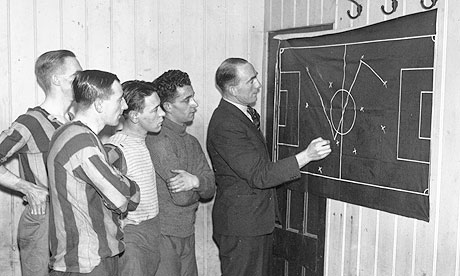 Oddly enough, watching Euro 2012 has provided a stark lesson for United and Alex Ferguson in how the team should be playing. It’s also emphasised that there’s been a huge change in style of central midfielders over the last 10 years, with sides focussing their football on a different part of the pitch. Should the Kagawa transfer go through successfully (work permit/medical), it’ll be the first real sign that United too, are to change the way they play.

Under Ferguson, United’ system has hardly changed – four defenders, four midfielders and two strikers – has been the preferred choice. (Although, other formations have been trialled in various competitions, and, quite often, his four midfielders may well include either a defender or a striker!). United have had plenty of success playing this way and it’s suited the majority of the players the club has had.

If you go back to the late 90s, the 4-4-2 system was the preferred choice of many of the Premier League teams. Central midfielders were robust and all-rounded, rarely specialising in just one or two areas. Wingers were direct but liked to hug the touchline and get crosses in. Most teams had striker partnerships: Yorke-Cole; Fowler-Owen; Bergkamp-Henry; Zola-Flo. The players suited the system and rarely did sides find the need to play anything else.

Since then, a few things have happened: central midfielders have ‘specialised’; technical (and non-technical) players who play in unconventional positions have become more prominent; formations and systems have changed as a result – many sides now line up with four defenders, 5 midfielders and one striker. Never has this been more evident than at Euro 2012.

There are exceptions of course; Spain started without a striker and Italy employed a system with wingbacks and a sweeper to counteract Spain. On the whole though, most teams have gone with a 4-2-3-1 system. The dilemma this gives is that it’s hard not to counteract that formation with anything other than the same one. As Ireland discovered, playing a 4-4-2 (particularly with inferior players), just sees the midfield overrun and opposition players find that they have a generous amount of space ‘between the lines’. Even England, with decent quality midfielders, were outplayed by the French; another case of 4-4-2 vs. 4-2-3-1.

United’s position is somewhat struck in time. Whilst the game has moved on, United haven’t really changed. On one hand, you can’t argue with Fergie, the club have continued to be successful and Ferguson’s had solid, if unspectacular midfield options that have been able to compete at a very high level. On the other hand, United have now started to struggle to play against the top teams who can exploit that United just aren’t comfortable playing systems that involve three in the middle – United just don’t have the personnel to pull it off. That struggle isn’t just limited to the top domestic sides, in Europe United have been ‘found out’ too.

The problem seems obvious. Three men in the middle should always have the better of two men. In order to have success with a two man central midfield, you need at least one all-rounded, quality, box-to-box player – someone who can tackle, and pass, and shoot – the full package. As noted though, this is the age of specialisation and technical ability. The influx of skilled foreign players coupled with a desire to copy teams from abroad, has lead to players being encouraged to focus on specific areas of their game (very evident at U19 level) and the death of the all-rounder.

Yaya Toure and Bastian Schweinsteiger represent that dying breed. The lack of complete midfielders goes hand-in-hand with the necessity to move away from 4-4-2. With more and more ‘passers’ and ‘creatives’ teams have moved towards possession football with some deep central midfielders and an increasing use of a ‘number 10’. The impact of this kind of football executed against a 4-4-2 can be seen in England vs. France – not one England player completed over 50 passes but seven French players did. Passing stats are somewhat meaningless but the more possession you have, the more likely you are to score – or the less likely the opposition are to score.

England were of course unfortunate that players who could have made a telling difference were either injured or left at home but even with the team that started, Hodgson could have gone for a 4-3-3 and matched the French rather than forcing his side to play very deep with two close banks of four. To quote a non-footballing watching colleague of mine: “England just aren’t very fast – the French were moving it about much quicker than us” – her observation is spot on; she witnessed England chasing play rather than making it.

Where United differ from England, is that they can go out and buy players to change the system. Shinji Kagawa hopefully represents exactly that – a player most comfortable in an traditionally unorthodox position behind a striker where he has license to roam in something of a free role. United have tried to play with someone there before (Rooney) but he’s not a natural in that position. Kagawa hopefully will move the focal point away from Carrick/Scholes and higher up the pitch, providing a natural link between midfield and attack.

The questions that the Kagawa deal now pose for United are:

1. What does it mean for Rooney/Welbeck/Hernandez?

(Expect Rooney to be the first choice striker with Welbeck often used wide with license to come inside as part of the interchangeable, fluid, front four. However, expect United to still play 4-4-2 in some games.)

(Hopefully, but Park and Anderson prove that being signed having played in one position, doesn’t guarantee that Fergie won’t tinker with players.)

3. Is there a need to play both Carrick and Scholes now?

(Probably not, one of the big dilemmas is that when the focal point of the team shifts forward, the necessity for deep midfielders becomes questionable – they can often just become passengers. Carrick of course is capable of playing higher but whether Scholes can play at the pace that playing higher up requires, remains to be seen. Actually, a fit Anderson or Fletcher would be ideal in this system alongside one of Carrick or Scholes.)

The move away from 4-4-2 is a victory for specialisation and tactical nuance. One only needs to watch teams at Euro 2012 to see that the only way to successfully combat (presuming you want to win rather than contain) three central midfielders is to match it.

United have almost always sought creativity from out wide and will continue to do so but Kagawa provides a new edge at a time when United have to change their system. The club have gone as far as they can in a 4-4-2 but without one of the few top quality all-rounded central midfielders in the world in their team, it’s probably not the way forward when it comes to competing at the very top. The lessons of last season have forced Fergie’s hand, it’s time for change.

Further reading on 4-4-2 from Jonathan Wilson:

The Question: What next for 4-4-2? – (I suspect that two years on, the last chunk may be quite different now – although 4-4-2 is likely to remain the first choice formation for teams below the top tier)

NB: United found that a 4-2-3-1 in the Ronaldo era was the best way to accommodate him. The result was often spectacular.