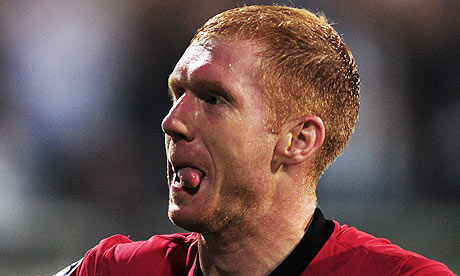 A testimonial for Scholes has always been pencilled in ever since question marks arose over his future a couple of months ago. However today it’s been announced that a Man United side will take on the New York Cosmos with Eric Cantona in the opposition dugout for Scholes’ final game on the hallowed Old Trafford turf.

Scholes’ retirement was announced just under two weeks ago and having agreed to stay on in a coaching capacity with the club, he’ll now play his final game as part of the pre-season schedule for the first team on the 5th August. The opposition are the New York Cosmos, recently reformed with Eric Cantona, the United legend and Director of Soccer at the American club, as the man to lead the opposition.

“This is going to be a big night for me and my family but one which I intend to enjoy and I will savour every moment. I have spent my whole footballing life at Manchester United, so this will be an emotional farewell. This club is special in many ways but the fans are the best and I have always appreciated their support throughout my career. I hope they enjoy the night, especially seeing the Boss and Eric battling it out in front of the dug outs.”

Sir Alex Ferguson also had his say on the game:

“Paul’s retirement was typical of the man: low key, he was safe on holiday just so he could avoid any media interviews. However he won’t be able to hide away this time and it will be fantastic for the fans to be able to bid farewell to this exceptional footballer. The accolades he’s received have been well deserved but for me Paul is one of those players who turns up, plays his football and it is that natural ability that makes Paul unique and revered by many, including myself. It is sure to be a great night and a well deserved recognition for Paul.”

The club have also provided information about tickets for the game:

It will be a fitting tribute to a remarkable footballer – unique in how he handles himself and a true artist of the game as recently pointed out on this blog.