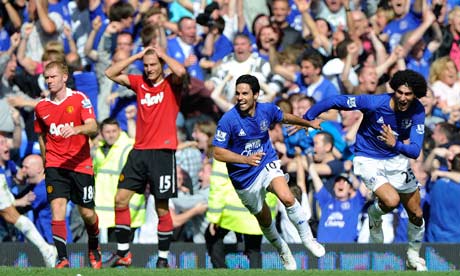 Where to begin?! What a strange week it’s been! United somehow still have a cushion at the top of the league – a 6 point gap now over Arsenal and a revived Chelsea. Meanwhile, Everton are on their own surge and are now hot on the heels of arch rivals Liverpool who are 6th. Despite what at first looks like a mediocre away record (19 points from 48), this is the 6th best return in the league. United though have been almost perfect at home this season and will be looking for a record 13th home league win in a row.

David Moyes has recently passed 9 years in charge at Everton. The job he’s done there on a limited budget has been superb and after a shaky start to this campaign, it looks like this will be another successful season. With 5 games to play, Everton are 7th and only 2 points shy of neighbours Liverpool in 6th. Despite finishing with more points last year than they’ll probably end up on this year, they only managed 8th. This season, the club are managing to concede less goals but scoring hasn’t come easily either. The club certainly haven’t been helped by injuries to key strikers and midfielders throughout the campaign – something that unfortunately for The Toffees extends to the game this weekend.

Pretty much regardless of who is available, Moyes has been loyal to a 4-4-1-1 formation. Baines and when fit, Jagielka and Distin are mainstays of a solid defence with Hibbert and former Red, Phil Neville battling for the right back spot. The midfield is prone to rotation based upon who is available. Don’t be surprised to see Mr Neville line up somewhere in the centre tomorrow given the players missing. The positioning of Jack Rodwell – an alleged transfer target for United – will be of interest. Given all the injuries, he’s now played a few times as the ‘1’ behind the striker and the furthest forward of the central midfielders (see games against Chelsea and Arsenal). The man to lead the attack will probably be Jermaine Beckford – he infamously scored the goal for Leeds last year that knocked United out of the FA Cup. Beckford is their second top league goalscorer this year with 7 goals, he’s two behind Cahill. Worryingly for Everton, no player has scored over 10 goals in all competitions (Beckford and Cahill both have 9 in total).

Only a couple of months ago, the aim for Everton would have been survival, but now they are just one win away from guaranteed survival with an outside chance of a European place looming on the horizon. The reason for the turn-around in fortune is an 8 match unbeaten league run (they did lose in the FA Cup to Reading in the middle of it). This run makes Everton the second most in-form side in the league with 14 points taken from a last 18 available. There away form is above average at the moment – 7 points from the last six games is joint 5th highest in the league. Everton haven’t been easy to beat on the road, only two teams have lost fewer games and only Man City have conceded fewer goals on enemy turf. However, 19 goals scored in 16 away games is a concern and accounts for why only 4 games away have been won.

On a positive note for Everton is that there are players returning from injury. However, this game looks like it will come too soon for Cahill, Arteta and Heitinga. Another former Red, Louis Saha is ruled out along with Fellaini, and youngster, Jose Baxter.

Everton’s record at Old Trafford isn’t good. They have only won once in 18 meetings – back in August 1992. Since then United have won 14 games including the four most recent ties. In fact, in the past six seasons, Everton have only managed 2 goals away at United. On average United hit 2 past Everton with the Merseyside club scoring less than one in reply. Last year’s meeting ended 3-0 to United with Carrick, Fletcher and Valencia scoring. In the early season meeting of these two sides at Goodison Park, United lead 3-1 until injury time when Everton scored two late goals to claim a 3-3 draw.

Enough on Everton…onto United and my predicted line up: The list of absentees has shortened again. Only Fletcher, Hargreaves, Lindegaard and Scholes (suspension) are definitely ruled out. Berbatov and Ferdinand are doubts though and with an intense fixture list neither are likely to be risked.

I’ve once again gone for a 4-4-2 or 4-4-1-1 as it increasingly tends to play out. In front of Edwin there may be some changes in the back four. Rafael is fit again and he may be given some important minutes on the road to full match sharpness. With Rio likely to miss out, Smalling should make his 31st appearance of an impressive season alongside Vidic. Despite picking Evra for the left back slot, I think Fabio has a good chance of playing given Evra’s erratic form.

There’s much to think about in the midfield in terms of who to keep fresh and when for – the next two weeks with fixtures starting on Tuesday against Schalke, Arsenal and Chelsea will certainly define this season. Valencia didn’t start in the 0-0 midweek draw at Newcastle and therefore I think he’ll come back in with Nani on the opposite wing. Both Park and Giggs I’d have thought will play on Tuesday night at Schalke. In the middle Carrick has been a mainstay and he’ll be partnered by one of Anderson or Gibson – on this occasion I’ve chosen Gibson. It’s seemingly much easier to pick the strikers – Rooney again should play behind Chicharito as Berbatov is a doubt. Owen will of course be hoping for a rare start and maybe as an outside bet, Joshua King could feature on the bench.

United remain top with a lead of 6 points now. Last weekend they crashed out of the FA Cup and midweek could only draw at Newcastle (failing to score in two consecutive games for the first time this season) – however Arsenal dropped points against both Liverpool and Spurs. This weekend, Arsenal are at Bolton on the Sunday and Chelsea who are now back in contention host West Ham in the late kick-off tomorrow.

Recent form shows United 4th in the form league with 10 points taken from a possible 18 in the last six games. At home, United have been almost unstoppable, with 15 games won out of 16. Their home record is the best in the league – they are the highest scorers with 42 goals and have the tightest defence with only 9 conceded.

In Dimitar Berbatov United have the league’s top goalscorer (21 goals) as well as the joint 6th and 7th top scorers (Chicharito with 11 and Rooney with 10), whilst Nani is the league’s top assister (18 assists; Rooney is joint 3rd with 11). It’s now over a year since an opposition player has scored a first half goal in the league at Old Trafford.

With a recent dip in form and rotation possible given the big games coming up, one would think there is potential for an upset against Everton. Certainly Everton’s form means that despite success at home this year, this must be taken incredibly seriously. However, United rarely go three games without scoring and winning and I think there will be a response from the players, I therefore predict a 2-0 win for the Reds.

You can share with us your thoughts ahead of the match and your favourite moments from games at home to Everton on our forum.