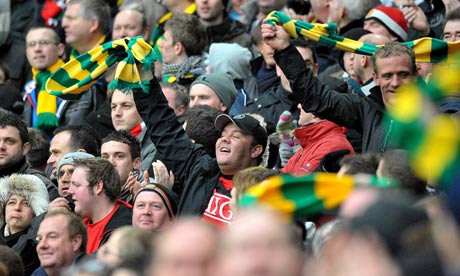 When it was finally “revealed” via statement yesterday that the Red Knights were effectively announcing their intention to NOT make a takeover bid for Manchester United in the near future, I wasn’t surprised. In fact, the more news that has come out in the last few weeks, the less confident I was about a bid at all and the more suspicious I got about the motives of supposed saviours.

Make no mistake; the intention and plan is the right one. One that all United fans should champion – returning football clubs to their roots with fan ownership is probably the only way that, in the modern game, supporters can retain a true emotional affinity from the ground up. Clearly that isn’t true of the elder generation. Those that were around in the 70s and even older, pre-Munich for example, have a lifelong relationship with the club that the corporate whirlwind cannot diffuse even if it does serve as a source of disillusion.

Furthermore, the Barcelona model shows that a club with such a proud heritage can not only remain competitive but also stay ahead.

So, why was I so undecided about the motives? Well, there was always the risk with the club being worth so much that getting the money together would be unlikely. So a cynical mind would think it was all an elaborate PR stunt. Some financial moguls referenced it as such when Keith Harris got publicly involved but nonetheless, early on, the noises were positive.

Positive enough to encourage tens of thousands to register to the MUST campaign in support of the Red Knights – MUST can’t be blamed for backing the wrong horse because the Supporters Trust is a tremendous resource and community for fans on its own merits. Back the wrong horse they have though and the cost to those who have supported the club for generations is yet to be counted.

As the campaign gained momentum and more and more dodgy financial results were published, more and more diehard fans started to pay more attention and get behind the cause. Visibly in the green and gold campaign and notably with the refusal to buy merchandise and low turnout in the renewal of season tickets. A forum thread mid-season on this site demonstrated both sides of the coin; extremist passionate pleas to boycott all money into the club and that nervousness that doing so would quickly accelerate the demise of the club. That reticence to fully stand behind the Red Knights is being justified now but it seems that this group of pirates have already made their mark.

Imagine if you will a family of season ticket holders for generations. They give up their tickets in protest; someone on the waiting list gladly snaps them up and the Red Knights just fizzle out. Might take another generation for that family to get their tickets again.

Worse is the apparent reason that the bid won’t come; because the Glazers are being “unrealistic” in their expectations. Hello. Loathe them as I do, they own a business, the most successful sports franchise in the world. Valued as such despite the debt. The naivety on show is appalling; is it acceptable, is it forgivable for a bunch of publicity hungry lowlifes to encourage some huge decisions from lifelong fans to support a bid that was never likely to materialise? They have encouraged a wide scale boycott of putting money into the club that is only likely to prompt the Glazers into bleeding more money out of the assets of the club.

At least with the yearly publishing of our nightmare accounts and all the figures that surface inbetween, the despicable behaviour of our American owners is transparent and there for all to see.

In my opinion; it’s even worse to masquerade as self proclaimed saviours of the club when in reality they have only served to worsen a situation already at the point of despair. The only likely scenario which will see the Red Knights successful in any takeover bid from this point will be to see United half in value in a very short space of time – short enough to keep the interest of the fly by night heroes.

Considering the dire straits the club are likely to be in to get to such a point and the level of contribution we will be able to attribute to the Red Knights; if they do finally seize control of the club, they shouldn’t be treated as our saviours. Especially by those who won’t be at Old Trafford to “witness the revival”.

8 Comments on Red Knights bid: Do you feel let down?