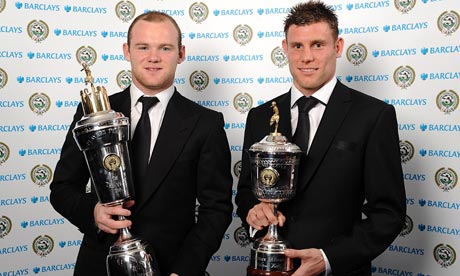 Wayne Rooney, scorer of 34 goals this season, deservedly won the PFA Player of the Year for the 2010/11 season. It is the fourth year in succession a Manchester United player has won the award – and four United players also made it into the PFA Team of the Year.

Rooney’s rise to star man in the United set up was always anticipated by everyone inside the club, and while those watching on hoped and predicted a collapse by the Champions after the sale of Cristiano Ronaldo, the forward has just naturally blossomed under the intense weight of expectation. When accepting the award Rooney did acknowledge that his positional shift this season was probably the major reason for, some might say, the long overdue recognition that it has been he who has been the heartbeat of this latest United side.

It wasn’t just his incredible goal tally that has seen him stand out – his vision and his intelligence has helped Luis Valencia and Nani blossom into top drawer wingers, so much so that they have developed the confidence to keep playing well without him as a spearhead.

Rooney follows Cristiano Ronaldo who won it in 2007 and 2008, and United legend Ryan Giggs last year, as United players to win it in successive years. He was also, predictably, named in the team of the year, alongside fellow United players Patrice Evra, Antonio Valencia and Darren Fletcher.

Last year there was uproar because Ryan Giggs won the PFA Player of the Year award, so I’ve been waiting a year to see what would be said in the aftermath of this season’s award. The award was criticised because it was seen as either a sympathy award or proof in some people’s eyes that votes were taken too early in the season for it to be a fair reflection.

Those same voices are nowhere to be seen this year; proving that the uproar was not about the timing of the award rather than the person, or rather, club that he belonged to. It was accepted on this website that perhaps Vidic had arguably been more impressive, but at the end of the day the award was deserved because Ryan Giggs had gotten more votes from his peers. He had been a master creator all season, and started this season in similar form.

The knock on point was that I concur the votes are taken too early in the season but I am startled by the lack of condemnation this time around. Cesc Fabregas and Tomas Vermaelen (yes, yawn, both Arsenal players) get in the team, Vermaelen despite having a horrendous second half to the season where his lack of actual ability to defend has been exposed, and Fabregas despite being outclassed to the point he may as well have not played in every top game he’s featured this season. Frank Lampard, Jonny Evans, Florent Malouda, Wilson Palacios, Nani and Carlos Tevez (urgh, that did not feel good) are among those that missed out due to the silly timing of the award. Due to the erratic, unpredictable nature of the award I don’t think the PFA Team should be dominated by any one team (I thought we did quite well to get 4 in, though they do seem to speak for themselves), but you have to consider what people are really upset about when they complain about the principle of something one year and then they don’t the next.

The principle remains because the structure of the award is the same, it’s just the winners are different.