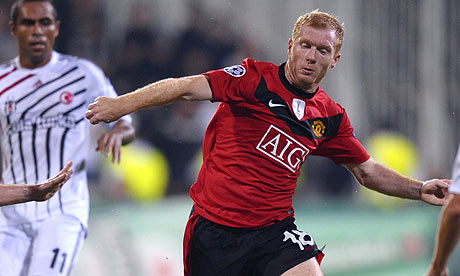 One thing that winds me up is the old ‘lucky Man United’ tag that gets labeled at any fortuitous event that surrounds the club. Whether it be a refereeing decision or a scuffed shot that hits a pigeon and rolls in past the keeper – United are generally perceived as a side that have the Gods looking down on them. It amazes me that tag has been around for about eighteen/twenty years – its interesting the Gods have stayed around for so long! So to Paul Scholes’ superb ‘shinner’ against Milan on Tuesday night – big fat piece of luck? Or what goes around comes around?

Six years ago at the same stage in the second leg against Porto, United went out 3-2 to Porto after Costinha scored a last minute equalizer from a Tim Howard fumble. Cue Matalan coat wearing Jose Mourinho dancing a merry jig down towards the East Stand. Everyone that witnessed that goal and eventual result knew that we’d been hard done by. Keane was missing after getting himself sent off for a stamp in the first leg – but we had enough quality to overcome the UEFA Cup holders – so much quality that Scholes actually scored a legitimate goal, but the linesman decided not to give it. I’m asking you know to please tell me what is wrong with the following goal:

Laughable decision – which cost us a place in the next round. You may never of heard anymore of Jose Mourinho had the official not been so incompetent. Was there as much fuss made of Ronaldinho’s “deflected” volley?? Van Der Sar would have made a comfortable save had Carrick not got in the way of the shot. Although, if Scholes’ goal is deemed a lucky goal, how unlucky is poor old Chris Brass: