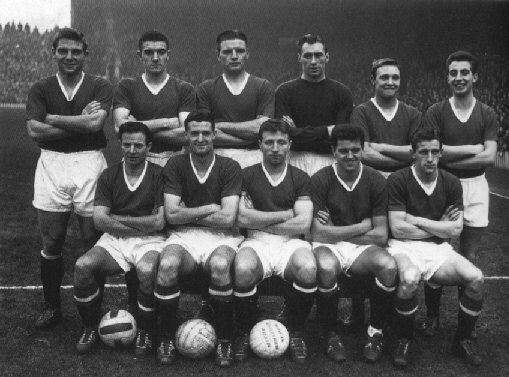 52 years ago today a plane carrying the Manchester United team crashed on the third attempt on the snow covered run way of the Munich airport. 23 people who were on the plane died after the crash, including eight Manchester United players. The team were returning to Manchester after a 3-3 draw with Partizan Belgrade and had stopped off in Munich. The tragedy meant that the Busby Babes would never play together again and is ingrained into the soul of the club. Today we remembered our fallen heroes – gone but never ever forgotten.

Below are the appearances and goals of each player who died:

The Flowers Of Manchester

One cold and bitter Thursday in Munich, Germany,
Eight great football stalwarts conceded victory.
Eight men will never play again, who met disaster there,
The flowers of English football, the flowers of Manchester.

The Busby Babes were flying home, returning from Belgrade,
This great United family all masters of their trade.
The pilot of the aircraft, the skipper Captain Thain,
Three times tried to take off and twice turned back again.

The third time down the runway disaster followed close,
There was slush upon that runway and the aircraft never rose.
It ploughed into the marshy ground, it broke, it overturned.
And eight of that team were killed when the blazing wreckage burned.

Roger Byrne and Tommy Taylor, who were capped for England’s side,
And Ireland’s Liam Whelan and England’s Geoff Bent died.
Mark Jones and Eddie Coleman and David Pegg also,
They all lost their lives as it ploughed on through the snow.

Big Duncan he went too, with an injury to his brain,
And Ireland’s brave Jack Blanchflower will never play again.
The great Matt Busby lay there, the father of this team,
Three long months passed by before he saw his team again.

The trainer, coach and secretary and three members of the crew,
Also eight sporting journalists who with United flew,
And one of them was Big Swifty who we will ne’er forget,
The finest English ‘keeper that ever graced a net.

‘Forever and ever, we’ll follow the boys, of Man United, the Busby Babes’