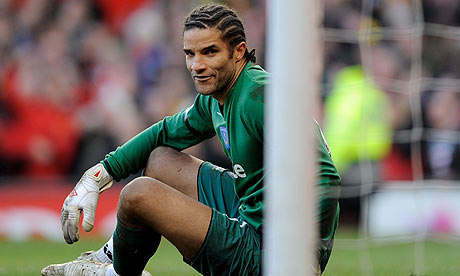 Premier League Champions Manchester United put beleagured Portsmouth to the sword to return to the top of the table and become top scorers in the division with the best goal difference though the relegation threatened visitors fully contributed to their own downfall with two own goals – making OG the second top scorer for the club this season – and a heavy deflection.

The game was expected to be a procession with murmurs of record scores and odds as long as 30-1 on an away win given the turmoil Portsmouth find themselves in but those predictions were not respectful of the fact that despite being bottom of the table, the South Coast team have not really embarrassed themselves this season and in David James they had an experienced keeper who was well capable of shutting out Untied single handedly.

Sir Alex Ferguson had selected a side that certainly appeared to be more counter attack based with less pressing urgency from the central midfield area and that was how it translated, making the game one that would be shaped from the first goal. And for a while in this contest, it wasn’t always cut and dried that it would be the Champions who would get it.

Jonny Evans went close with a looping header on 12 minutes before Pompey hit back and tested van der Sar through van den Borre. Nani – on the left today after impressive form on the right recently – was causing problems but he fired a long range shot wide and then Rooney’s effort from the Portguese wingers pass was snuffed out.

Nani then set up United’s top scorer again – Rooney had plenty of space, centrally, from 20 yards, but his shot was well over. He was almost punished for the wastefulness when Portsmouth attacked and worked a move well out left to Belhadj. His shot beat van der Sar but Evans was alert to clear off the line, back to Belhadj who spooned over. It was then the hosts turn to create another chance, Neville picked up a Valencia pass to burst into the area and set up Berbatov. The Bulgarian’s shot was less than clinical to say the least and underlined the fact he is not exactly a natural finisher.

The breakthrough did come before the half time whistle though, when Neville’s short corner found its way to Fletcher via Valencia. The Scot crossed and managed to find Rooney amid a pool of white shirts in the 6 yard box. The forward made no mistake; and as the game headed towards the halfway point he began the move that settled the result. Nani was wide left and outfoxed van den Borre, before attempting to cross. The Belgian defender did manage to get a touch to the ball but it only directed it goalwards, and David James was unable to react quick enough to stop it going in. Just as last week, Nani could take the credit but despite his celebrations there is no way he will be awarded the goal.

Aside from a short burst after the Belhadj chance the Red Devils never really got out of first gear nor were they made to by Portsmouth. This made the second half at times a laborious affair regardless of the 3 goals scored.

On 55 minutes Valencia played the ball into Berbatov and collected the brilliant return but his shot was easily turned wide by James, before a 3 minute spell either side of the hour brought two more goals. The visitors were unable to adequately clear and the ball fell to Carrick 25 yards out. He had space to set himself up and although his shot took a huge deflection from Hughes it beat James and smashed in off the cross bar. The fourth came when Berbatov collected a long pass and held the ball up for what seemed like an eternity, looking for the pass. No option presented itself other than the invitation to shoot and the Bulgarian accepted it, steering the ball home from the edge of the area.

Sir Alex took the opportunity to make a triple change with what seemed like an audition for Gibson, Owen and Diouf.

Gibson presumably has a chance to make himself the reserve midfielder given Anderson’s current squad status and he did ok, using the ball well at times; Owen on the other hand was poor. Having been signed for his predatory instinct it is clear the veteran spends most of his time trying to link up instead of playing to what should be his strengths – a point not lost on Diouf who was arguably the most impressive of the three introductions.

None of the subs did manage to effect the scoreline; nor did any other United player, but 3 minutes after the changes a spectacular own goal from Mark Wilson in trying to clear Evra’s great cross completed the scores. There were a couple of half chances from there with the most clear falling to Diouf. Gibson’s pass was clever and Diouf did well to beat his marker but his shot was poor and cleared the bar by some distance.

The game was played on the 52nd anniversairy of the Munich disaster and the visitors and their supporters impeccably observed the minutes silence; the visiting supporters would not have been happy that their own players featured so heavily in their own downfall. Ferguson however would have been delighted with the ease of the victory given that the next three games will have a huge impact on United’s trophy hopes of this season.