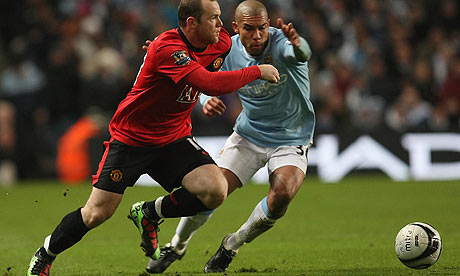 Carlos Tevez scored twice to give Manchester City a slight advantage going into the second leg of the Carling Cup semi final but to say the result was fortunate would probably be the understatement of the decade so far. The game was re-arranged after being originally postponed for snow; but Sir Alex Ferguson was true to his hint that he would shake things up following the FA Cup exit and play a stronger side – it was more or less United’s strongest, in a 4-3-3, as City did likewise.

After dictating the pace of the game it was no surprise that United scored the opener just after the quarter hour – Patrice Evra’s crossfield pass found the in-form Antonio Valencia who skinned Craig Bellamy before flashing a cross across the 6 yard box. Wayne Rooney got in front of Kompany to divert it goalwards, experienced stopper Shay Given was equal to it, but he was helpless to stop captain Ryan Giggs scoring front point blank range with the goal at his mercy.

City struggled to impose themselves on the game. With Anderson and Fletcher busy in midfield, Rooney never giving the defenders peace, and Valencia always an option on the left, the visitors always looked more likely to notch again. Roberto Mancini’s team began to show a little of their nasty side in an attempt to unsettle United’s defenders and it worked, temporarily – a thigh high lunge by Tevez on Wes Brown did nothing to endear him to the travelling supporters and was left unpunished by Mike Dean who was showing signs of not being able to handle the game despite his wealth of experience -the ex-Red Devil forward Tevez almost equalised but his header from Wright-Phillips’ cross was woefully off target.

Dean then saw fit to award a penalty in favour of the home team for shirt tugging by Rafael on Bellamy – the offense clearly took place outside of the box, Dean seemed to be indicating the spotkick was awarded for a second offense that only he must have seen. Tevez duly smashed in to equalise and then gestured for around 30 seconds to United fans and officials alike. City’s lack of discipline was on show yet again moments after the kick off as Valencia attempted to attack down the right and was stamped on by Bellamy in another disgraceful foul that went unpunished by the referee. The atmosphere was, for the first time, at fever pitch, and although United did attempt to establish some late pressure in the first half, Sir Alex was probably relieved to get his troops back in the changing room.

The second half began much the same as the first – Wes Brown fielded a long ball towards Rooney who capitalised on Kompany’s hesitancy to sneak in but his shot on the turn was saved by Given. Rooney was stamping his authority on the game and was unplayable in the second half – shortly after this chance he turned provider, easily beating his marker and putting a cross in for Giggs. The Welshman’s header was brilliantly improvised but was always unlikely to score given the angle.

It was then Tevez’s – and referee Mike Dean’s, for that matter – to take centre stage again when a corner was awarded for City following Wright Phillips poor ball that whimpered out of play. The poor decision to award the corner did not excuse the shambolic defending that followed, United pushed out when the ball was still around the area, Kompany hooked the ball across the 6 yard line and Tevez bravely threw himself at the ball to notch his second and indulged himself in yet more gesturing.

While the goals were admittedly just reward for his fine energetic display, the kind of which United fans used to adore him for, the best player on the pitch, Wayne Rooney, was not destined to get the reward his performance deserved. United made changes as Michael Owen came on for Anderson – more tactical than performance based as the Brazilian continued his impressive recent form – and while the veteran English striker’s impact in the previous Manchester derby was in the final stages, he almost immediately made an impression, feeding in Rooney who was again denied by Given before striking the rebound, that beat the keeper but was cleared off the line by Onouha.

It was all United from here on, the hosts did break with some menace, attempting to exploit Rafael’s yellow card from the penalty (a decision made incredible by the referee’s leniency with the brutal fouls in the first half) through Bellamy, but the ball always came back and City’s goal was living a charmed life and the Irish keeper had to be alert again as Rooney fantastically danced through 3 or 4 challenges and tried a classy poke into the top corner only to be denied. Valencia was next to miss when his attempt to volley a fizzed cross was wild with the goal gaping, and then Mame Diouf (on for Rafael in injury time) just failed to get the proper connection on a Giggs corner.

There was still time for a late penalty appeal after a City defender appeared to handle Rooney’s cross but Mike Dean was in no mood to play by the rules. The game finished, decided by two goals that were of direct consequence of Dean’s mind boggling decisions and two possible red card incidents that he deemed worthy of no card whatsoever.

Dean and Fergie have history – after United’s 4-3 win over Hull in 2008 the United manager was fined and given a touchline ban for making comments about the officials performance, and it can’t help but be noted that this is a referee who was removed from FA Cup Final duties in 2006 because the FA were concerned he would be pro-Liverpool. On the plus side, it was an encouraging performance from the holders who dominated the game and absolutely battered their local rivals in the second half.

Another performance like that in the second leg, with a balanced referee, and United should be heading to Wembley to defend their trophy.