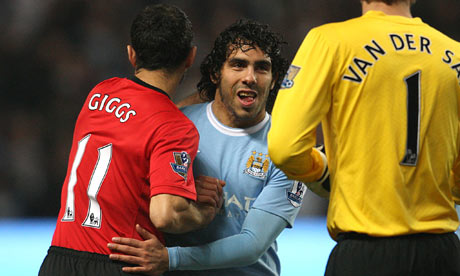 Carlos Tevez has spoken about the comments from Manchester United club captain Gary Neville towards him regarding his decision to leave Manchester United for Manchester City. On Tuesday the former United striker seemed to be more interested in winding up his old employers than celebrating with Manchester City fans after scoring a controversial penalty in the 2-1 victory over United and celebrated with a hand gesture, that was in reference to Neville’s comments . However, since the 1st leg the Argentinian has spoken about the criticism aimed at him by Neville regarding his departure to Eastlands.

Tevez felt that Neville “wasn’t involved in the contract discussions” and therefore should not have an opinion on the matter:

“I was particularly disappointed with what Gary Neville had to say because he was not aware of the full details of my contract negotiations with Manchester United, because I kept them very much to myself. “Sir Alex Ferguson knew that my contract was coming to an end and it was not until the last day that I was finally made an offer. It was too late by then. For Gary to make his comments was disrespectful.”

Tevez seemed to forget the fact that his advisers were demanding a much large fee for the player than was originally agreed and that he held the record for the fourth highest appearances in 2008/09 – whilst only finding the back of the net five times in the league and twice in the Champions League. He then decided to take a stroll down memory lane – discussing the moments both he and Neville shared in his United days, whilst also stating that United players and management must ‘respect’ him:

“We were team-mates and we played alongside each other and won trophies together and I have a great respect for Gary. I thought the feeling was mutual. The goal celebration was made without any malice. It was in the passion of scoring in a Manchester derby. It was part of the banter of football and I’m sure he will give me something like that back if he scores at Old Trafford next week. I have respect for all the United players and the management and I believe I deserve their respect back.”

Ryan Giggs was in an optimistic mood after reflecting on the events at Eastlands last Tuesday and compared the second leg clash to that of last year’s, against Championship side Derby County. United lost 1-0 in the first leg, but beat the Rams 4-2 at Old Trafford – which saw Carlos Tevez get on the scoresheet. Giggs was quoted as saying:

“I hope it is similar to the Derby game. We beat them quite comprehensively in the second leg so hopefully we can do that again.”

4 Comments on Carlos Tevez: Neville was wrong and United respect me