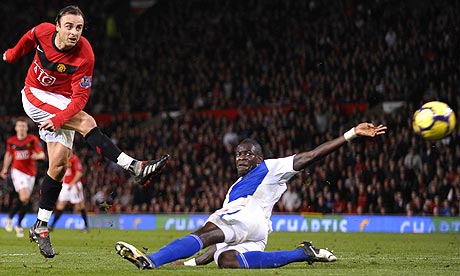 Strikes from Dimitar Berbatov and Wayne Rooney settled this game against Lancashire rivals Blackburn Rovers who put up a stubborn and resolute defensive performance against United.

Blackburn had been Premier League whipping boys on the road this season with recent heavy defeats at the Emirates and Stamford Bridge but predictably managed to stiffen their resolve when visiting Old Trafford. For their part, the Champions offered very little in the way of convincing that they could break down their opponents with just 2 chances in the opening 30 minutes.

On the half hour however an expected burst of action that brought 4 times as many chances in the remaining 15 of the opening period was initiated by a hat-trick of Dimitar Berbatov chances – the first blocked by Givet, the second denied by Robinson after wonderful work from Rooney and Valencia and the second stopped by the Blackburn custodian again.

With Rovers now chasing the game Sir Alex Ferguson saw an opportune moment to give Gabriel Obertan his Premiership bow from the bench. Obertan impressed in his half an hour while giving truth to the general opinion that his unquestioned exciting potential is seemingly sometimes undermined by his lack of self belief. Certainly it seemed to be this that stopped him opening his goalscoring account for the club as he had two real openings to do so – the first weakly hit with his left foot and the second completely screwed with the goal gaping after substitute Michael Owen had left a Valencia ball to roll for him.

The security of a second goal came with just a couple of minutes remaining when Anderson’s good ball after interplay between himself and Obertan was cleverly converted by Rooney who scored his first goal since the Manchester derby six weeks ago. There was still time for Blackburn to have a goal through Kalinic wrongly ruled out for offside and for Michael Owen to drag a chance wide after a great flowing move, but neither incidents threatened to change the result.

The media will no doubt report the performance as one that was unconvincing but the reality of the situation is that playing against, at times, a 9 or 10 man defence who never even tried to chase a result even when they went behind was never going to result in a game that would yield a number of goals. The performance of Berbatov after the first half an hour was promising and Anderson continues to put in the kind of shift that makes you think he must surely be starting to force his way into Fergie’s trust for the bigger occasions.

Given Blackburn’s recent results it was never going to be a pretty occasion and with a comfortable victory and encouraging signs United fans should surely be thinking of this performance as a treat when a trick looked like it may have manifested itself.